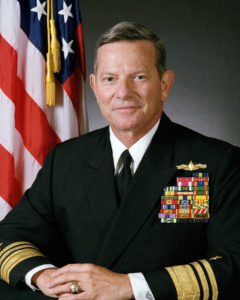 On April 11, 2016 the Naval Historical Foundation lost a strong supporter who was part of one of the Navy’s more storied families – Vice Admiral Henry C. Mustin.

His grandfather, the first Henry C. Mustin, established his fame in naval aviation history when he was launched by catapult off the underway armored cruiser North Carolina – a first! He also established the naval aeronautical station at Pensacola, Florida which remains today as an essential training facility and home to the National Naval Aviation Museum.

His father Lloyd Mustin served as a gunnery officer on cruisers during World War II, surviving the loss of the light cruiser Atlanta during the Naval Battle of Guadalcanal. He would rise through the ranks and retire as a vice admiral.

The junior Henry C. Mustin also had a brother Tom, who also served in the brown waters of Vietnam and was decorated for his combat actions.

Such was the contributions of this foursome that the Navy commissioned the guided missile destroyer USS Mustin (DDG 89) in 2003 to honor their service to their nation.

The recently deceased Mustin’s portion of those contributions was quite significant. A graduate of the Naval Academy Class of 1955, “Hammerin Hank” would have an extremely successful career in the surface warfare community and as Commander, Second Fleet, developed naval operational goals and objectives that would be incorporated in the Maritime Strategy that aimed to take the fight to the Soviet Union in the advent of World War III.

In early 2001, NHF historian Dr. David Winkler and Mustin USNA classmate Captain William Peerenboom conducted a series of interviews which combined to make a remarkable oral history. With his memorial service scheduled for this Thursday morning at the Naval Academy and with his family’s permission, the NHF is pleased to honor Vice Admiral Mustin with the posting of his lifetime recollections of serving in the United States Navy.