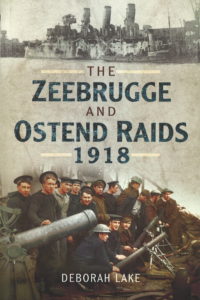 In a struggle of global proportions, minor acts at times achieve a resonance not measured by the ledger of gains and losses or the scale of their actual decisiveness. The Arab Revolt during the First World War may be cited as one such occurrence, but the raids on the Belgium ports of Zeebrugge and Ostend in April and May 1918 by the Royal Navy have claim to being another. Deborah Lake’s The Zeebrugge and Ostend Raids 1918 is a highly readable and well-illustrated narrative of a desperate action executed at the nadir of Allied fortunes on the Western Front when the question remained whether the army could win the war before the navy had lost it.

So held Admiral Lord Fisher, erstwhile First Sea Lord, and the peril facing Britain was the toll German submarines were exacting against the shipping that sustained the home front, no less than the greater war effort. A delayed and ineffective naval response to that threat spelt the end of Admiral Jellicoe’s period at the Admiralty and, in turn, that of his acolyte, Vice-Admiral Sir Reginald Bacon commanding the Dover Patrol. Into the void of the latter vacancy stepped Acting Vice-Admiral Roger Keyes, only recently promoted to flag rank and even more recently, Director of Plans at the Admiralty.

The idea of a combined operation against Zeebrugge predated the present U-boat challenge. Seen as one means of forcing a fleet action in 1914, a worry by late 1917 was of the German Army descending upon the exposed flank of the British Expeditionary Force through an amphibious assault. Such had been demonstrated against the Russians at Oesel in the Gulf of Riga. With Allied armies now reeling under the weight of the enemy’s spring offensives, denying the use of Zeebrugge and Ostend was always more than countering the single threat the author posits. As for those earlier schemes, Rear-Admiral Sir Lewis Bayly and Colonel Sir George Aston had considered a Zeebrugge serial in 1913 before the onset of hostilities and the point was examined anew by Admiral Sir Henry Jackson and his Committee on Combined Operations from December 1914 in the present war. The sticking point in the last instance had been acquiring the support of the French Army, no less than the reservations of Fisher.

All this is absent from Lake’s monograph and so too Bacon’s unconventional background of having obtained a colonelcy in the Royal Marine Artillery in January 1915, though a retired flag officer. This points to a central weakness of the work: though strong on discussing a specific operation, Lake is singularly disappointing on the background and experience of the navy in such ventures. This context is important for it says much about how the operations were planned and executed and why support from the War Office was discounted. For years the Admiralty had been trying to concert its strategy with the War Office, but the sights of the latter were firmly fixed on acting in company with France. As for that experience, the blocking operation directed against the Königsberg in East Africa in November 1914 or employing the River Clyde as an assault ship during the April 1915 Gallipoli landings are two episodes not explored for their lessons on tackling Zeebrugge and Ostend in 1918.

Given the scale of defences present, the dictates of tidal influences and the need for precise navigation, positioning cement-laden light cruisers and a submarine as block-ships to deny the enemy use of Zeebrugge and Ostend was demanding much of any navy. For the Royal Navy of 1918, it was a challenge much within its operational portfolio. Lake thoroughly describes the modifications to vessels made, the appliances developed and employed to screen the approaching force and the training of the assaulting troops. Meanwhile, preliminary steps included regular raids by aircraft and ships to accustom defenders to the presence of British forces operating in the area. Operation ZO, as the raids were styled, would see a mixed flotilla of destroyers, submarines, coastal motor boats and launches cooperate with the Royal Air Force to eliminate the ports as a source of worry. In the end, the goal proved elusive and the author is scathing in her criticism that so much blood and resources were expended for so little reward.

Lake’s particular bête noire is Keyes. Seen as a brave but essentially amateur protagonist in the deadly business of war, too often he played favorites at the expense of other worthy officers. His planning of the raids is held slipshod and directly contributed to the poor results obtained, never mind the excessive awards gazetted to those who participated. These are serious charges and not without elements of truth, yet they remain the voice of the prosecution. Little is cited in the way of mitigation. Namely, playing favorites was not a sin unique to Keyes and it was the amateurishness of the navy that had led to creation of an Admiralty War Staff and its associated War Staff Course. More troublesome though is the author’s penchant of biting sarcasm. ‘A commander must do more than just walk around in a big hat with gold braid on its peak and snap orders at deferential juniors’ is a tone too often present and could have been omitted with no loss of suasion.

Keyes was very much a product of his times and of his service and it is wrong to apply twenty-first century standards in military planning to the raids. The element of time dictated all and the reasons giving rise to the operations cannot be reduced to a single cause. If Keyes had many faults, then he possessed those traits of zeal and initiative which the service prized so highly in any desperate venture and, make no mistake, attacking Zeebrugge and Ostend was a desperate venture. Still, Keyes was no fool. When weather conditions proved unfavorable and dropped below the minimum required, the admiral aborted a first attempt. A second attempt quickly followed culminating on St George’s Day—April 23. It proved disappointing in the results achieved and, most especially, at Ostend, requiring yet another raid be launched. Even then, the navy and the Royal Air Force would return again and again to shell and to bomb.

Operationally, then, the raids failed to secure the ends desired, but wars are always fought for a higher purpose and to greater ends. Thus, the attacks on Zeebrugge and Ostend were painted as feats exemplifying ‘The Old Naval Touch’ offering cheer to a nation, to a cause and, yes, to the navy itself. Absent endnotes and with an incomplete bibliography, the professional and the academic will be disappointed in the accounting presented. For those who read to a lesser purpose, The Zeebrugge and Ostend Raids 1918 provides an earnest introduction to an action of high adventure and it is with those caveats the work can be recommended.