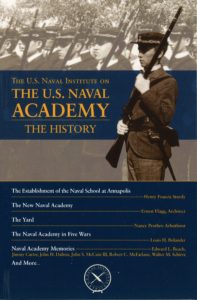 In 1839, the federal government established the first formal non-private naval school in Philadelphia called the “Naval Asylum,” a somewhat daunting name by today’s grammatical vernacular. The school, the actual forerunner of the U.S. Naval Academy, was an academic supplement to the “on the job training” (OJT) methods used for naval officers of the time.

Though there was a strong mindset that OJT was the only true training for naval officers there was a loosely regulated requirement for a formal education for midshipman candidates prior to their acceptance to the training program and a commission. As an example, the then future Admiral David G. Farragut (actual birth name was James) was home/ship schooled by his adopted father Captain David Porter and was only nine years old when he entered service and was commissioned. The staff hired for the “Asylum” was the best of the best of the time and in the right place at the right time for success. They established such a great reputation for the school through their students’ accomplishments at sea that the Secretary of the Navy George Bancroft lobbied to establish a full-time national naval college.

With much difficulty due to the “old school” thinking by the establishment, Bancroft was able to get just enough support to give it a try. By 1845, the land where the Academy still stands today, with a short move to Rhode Island during the Civil War, the former Ft. Severn on the banks of the mouth of the Severn River into the Chesapeake Bay in Annapolis, Maryland, established a new national naval academy.

Nothing about the establishment of a permanent naval academy was simple. It was the teaching staff of the “Asylum” that was transferred to the new project and the discipline and determination of the first superintendent Commander Franklin Buchanan that made it happen. The old fort was a shambles, the grounds were overgrown, and the buildings were in horrendous and unsafe shape. They had to acquire bedding, boats and ships for shipboard experience and navigation training, books, desks and other necessary equipment; they were starting from scratch. The only thing that was not an issue was the enthusiastic staff. The early subject matter was basic, Mathematics, Natural Philosophy, Chemistry, English, French and Navigation. Of course over the last one hundred and seventy plus years the U.S. Naval Academy at Annapolis has had many additions, renovations, academic revolutions and revelations. Over the years classes were broken up because of wars interrupting though not stopping the continued established traditions and adding memories significant to not only its alumni but to the national history as a whole. The U.S. Naval Academy today is one of the most prestigious academic and research institutions in the world not just from a military and naval aspect but, as a pure academic institution. As an additional note, in 1873 the U.S. Naval Institute was founded and is still housed there which shares in and feeds from its academic excellence, students, faculty and staff not to mention the many academics that it attracts from all over the world to further naval technology and the understanding of sea-power.

This edited collection includes twelve articles previously published in The U.S. Naval Institute journal publications Proceedings and Naval History dating back as far as 1899, as well as the hard-bounds: Guiding Lights and The U.S. Naval Academy: An Illustrated History, 2nd Edition. As my usual process, I read the book three times for the initial impact, technical/historic content and grammatical edit. The amount of information included here I will admit, was more than I expected for the size of the book. The authors kept each standalone article interesting by including the origins of traditions, why the buildings and grounds are aligned the way they are, and many more “nice to knows” and “oh, is that why.” Some sections had slow spots within the rhythm of the read and sometimes became wordy, most likely because of when they were actually written. The different perspectives from the different authors kept me interested in continuing in spite of some repetition of facts among the articles giving me a unique perspective of the institution. I have made many trips to the academy over the years and have a familiarity with the facility, traditions and history. A few illustrations and a panoramic or picture or two especially of the early days, that I know exist, would have been helpful additions by the editor for readers that have never been there. The history spans to the early 1990s and includes an interesting list and blurb of distinguished alumni. If you have an interest in a “quick read” of the first 150 years of the U.S. Naval Academy at Annapolis I highly recommend this publication especially for the price offered.