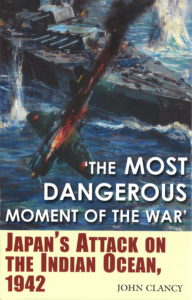 Naval activities in the Indian Ocean during World War II are rarely talked about in U.S. historical circles as it was primarily a British theater. In 1942 when the war broke out, Ceylon (modern day Sri-Lanka) was home base to the British Eastern Fleet. After his devastating attack on Hawaii in December 1941, Vice Admiral Chuichi Nagumo was ordered to the Indian Ocean. By March 1942 he was ready to set the stage for an eventual meet-up with German forces invading from the west. Even though the meet-up never came to pass, Nagumo did manage to devastate the British Eastern Fleet, giving Nagumo’s already swollen ego another pump.

The British naval forces in the Indian Ocean consisted of mainly battleships and cruisers as the capital ships. They did have an aircraft carrier. With minimal and antiquated aircraft, the carrier was not yet considered “capital” and rightfully so when compared to the Japanese. As the British experienced here and as recently did the Americans, the naval air-force proved to be the wave of the future in naval warfare.

Known as Operation C by the Japanese Imperial Navy, the Indian Ocean campaign put the British Navy on the defensive, if not evasive. The commander of the Eastern Fleet was Vice Admiral Sir James Somerville. Warned by signals decrypts of the impending Japanese encroachment, he secretly moved most of the ships, aircraft and maintenance facilities to the Maldives in an attempt to preserve what he can. The Japanese were on station in the Ceylon area for only a few weeks. Despite Somerville’s defensive and evasive posture and the base remaining secret until the end of the war, the British Eastern Fleet lost the bulk of their war and supply ships and antiquated aircraft to air attack.

The author provided ample detail explaining the losses and issues associated with the Indian Ocean Campaign for both sides. Included are several personal accounts, interviews and photographs. Unlike many other narratives of this type, he did not dwell on making excuses for the mistakes made by the fleet command nor beat them down for their decisions. He put it out there for the reader to decide. He also interjected the political side as well as Sir Winston Churchill’s concerns throughout the scenario. The book is fairly short and worth reading.

Michael F. Solecki, is an independent naval historian, holds a Master of Arts in Military History degree from Norwich University and is a veteran of the U.S. Navy and NOAA where he acquired, processed and disseminated environmental intelligence for Anti-Submarine and Anti-Aircraft Warfare and developed consequence management plans for Weapons of Mass Destruction. He is currently an Enforcement Officer and Incident Commander for the U.S. Government and he performs technical peer reviews for several publishers of U.S. and Japanese naval history.