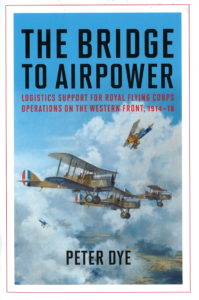 “In war we must expect a casualty list of 100% every three months in men and material and must be prepared to replace all our pilots, observers and machines at this rate….” Brig. Gen. Robert Brooke-Popham

Gen. Barrow’s division of the world into two groups would certainly list Gen. Brook-Popham, who made the remark above three years prior to the outbreak of the First World War, among the professionals. Peter Dye, Air Vice-Marshal (RAF ret.) and former Director General of the RAF Museum, also belongs to that company as The Bridge to Airpower: Logistics Support for Royal Flying Corps Operations on the Western Front, 1914-18 amply demonstrates.

Dye’s purpose in this writing study is to supplement and extend other work he has done in which he has argued that the principles and practices of First World War aviation logistics on the western front formed the foundation for strategic success in the Second World War. Further, he hopes to correct some of the neglect of “the strategic and operational dimensions of logistics” by military historians. As he notes, “The critical role of production, supply, maintenance, and repair in the birth of three-dimensional warfare remains unexplored, even though the ‘modern style of warfare’–in the form of indirect, predicted artillery fire–only emerged because the RFC was able to secure and sustain air superiority.” (xiii)

Dye’s interest in aviation logistics reflects a successful career as a Royal Air Force logistician. He can even boast of a family connection to the specific business of First World War aviation logistics through his grandfather. The Bridge to Airpower is derived from Dye’s 2013 University of Birmingham doctoral thesis with only minor changes. It is replete with tables, graphs, and illustrations that offer proof of the thorough research and thoughtful analysis that has gone into the writing of the book.

Dye defines ‘aviation logistics’ as “the varied activities that procure, store, move, sustain, maintain, and repair the systems, associated components, and equipment employed by air forces.” These processes, he continues with catholic expansiveness, also “include technical development, manufacture, testing, modification, and salvage as well as the building of airfields and the recruiting and training of technical personnel, with the product known as the ‘supply chain.’”(2)

World War I was an artillery war, and “In operational terms, the RFC’s main contribution on the western front was undoubtedly artillery cooperation. The deployment of new, war-winning firepower techniques depended entirely on aircraft operating in conjunction with artillery….” For that reason, the number of aircraft available to frontline formations assumed great importance, and it was to be expected that great efforts were made to provide the necessary resources to keep planes in the air. “The critical development in this achievement was the creation of a system that enabled delicate, often temperamental, and constantly evolving machinery to be supported under the most testing operational conditions and in the face of wastage that averaged more than 50 percent of frontline strength per month. In addressing these problems, the RFC found innovative solutions that provided a template for other air services and established best practices that continues to be relevant in the delivery of contemporary airpower.” (8)

Dye ably captures the enormity of the task faced by logistics experts who must turn always inadequate information into a concrete plan for production, transport, storage, repair, and replacement. “Predicting demand levels is fraught with difficulty,” he writes. “Analysis of aviation logistic systems deployed in the Second World War, suggests that logistic planning, however detailed, cannot anticipate the changes brought about by new tactics, new weapons, technological shifts, or altered strategic circumstance.” He deduces the characteristics he believes necessary in a logistic system able to manage uncertainty. These qualities include coherence (i.e., an operational alignment), flexibility, the ability to learn, technological competence, and administrative excellence combined in an information-driven organization.

By modifying various USAF metrics, Dye then develops a matrix that allows him to measure the RFC’s overall logistic performance (Table 1, pg. 17). These indicators–e.g. total manpower employed, total sorties generated, serviceability rates, enemy batteries destroyed, and similar–are employed to examine the effectiveness of the RFC’s logistic arrangements and to see how it changed over the course of the war by comparing performances during three specific episodes: the Somme; Arras and Third Ypres; and the Hundred Days. Dye focuses his analysis on the RFC as a whole treating the RFC and its logistic arrangements as a single interconnected entity.

The Bridge to Airpower opens with a lengthy introduction that provides a brief bibliographic review of some of the best known works in logistics studies including Martin van Creveld’s Logistics from Wallenstein to Patton. Dye notes that “the existing literature largely ignores the substantial technological, economic, and industrial foundations required by air forces.” This is followed by seven chapters, the first three of which provide the reader with the context needed to appreciate the three case studies that follow.

The first chapter begins with a survey of the early development of aviation in Great Britain and traces the evolution of air operations on the western front. Anyone familiar with the British army in the summer of 1914 will not be surprised to learn that British aviation was unimpressive when compared to its continental counterparts. Primarily a consequence of political limitations, British aviation’s doctrine and technical base in 1914 were much less well established than either its major ally, France, or its principle opponent, Germany. As Dye shows, the British would draw heavily on the French for both air technology and doctrine during the first months of the war.

The second chapter focuses on “The Royal Flying Corps’ Logistic System, 1914-18,” and reviews the arrangements to keep the fighting front supplied with airframes and engines. Dye traces the establishment and expansion in France of the various depots, the necessary infrastructure, the manning, and the practices and procedures needed by the RFC to keep its forces operating in wartime. This was not only effective, he concludes, but established the basis for RAF operations in the Second World War.

In the third chapter, “The Supply of Aircraft and Aero-engines, 1914-18,” Dye explores the logistic arrangements developed during the war, both in Britain and in France. Dye employs two case studies to illustrate his discussion of the expansion of the British aircraft industry during the war and of its ability to provide the principle components of the air war, aircraft and engines. These studies follow on the development and production of the R.E.8 aircraft used for artillery cooperation and the development and the Hispano-Suiza airplane engine produced by the French and purchased by the British to fill shortfalls in their own wartime engine production.

Having established a suitable context for the reader, Dye presents the three case studies, one each in subsequent chapters. Chapters four, “1916–The Somme,” and five, “1917–Arras and Third Ypres,” look at the RFC’s logistics performance during those essentially static engagements, and chapter six shifts focus to the operations of logistics on the move following the restoration of mobile warfare with the Hundred Days offensive that began on Germany’s ‘black day’ and carried on until and after the Armistice.

It is interesting that chapter six, which demonstrates the RFC’s shift in mission away from artillery fires support to direct aircraft attacks, also presents the use of aircraft as flying artillery, a function perfected by the Luftwaffe a little more than twenty years later. This use became a necessity, since presumably the batteries could not always keep pace with and provide effective fire support to the advancing formations.

Dye’s final chapter presents his conclusions and summarizes from his study “the enduring lessons and the degree to which the logistic principles established in the First World War influenced RAF planning for the Second World War as well as presaging the global supply chain and best practice in contemporary logistic management.” Dye also evaluates the RFC’s performance against the principles for logistics laid down by US Army logistics historian James Huston in his 1966 work, Sinews of War: Army Logistics 1775-1953.

Historically , Dye says British “logistics competence” was “instinctive rather than inspired.” No British general “operating on a foreign shore would ignore supply in the way that Napoleon was able to abandon some of the more static aspects of the line of communication and free himself (to a degree) from reliance on depots and distribution centers.” This was, he writes, largely a consequence of the interaction with contractors forced on the British army by the government in lieu of providing it with its own permanent supply organization and a consequence of its repeated experience in carrying out operations in remote regions from the center of the British Empire. (3-4)

This aspect of the British way of war was forced by circumstances to change radically during the First World War, and those hard-won lessons were not entirely forgotten two decades later. Now, seven decades after that second conflict, the lessons are not only crucial to modern warfare, they have changed modern societies around the world. Citizens of modern societies rarely give much thought to logistics. All of that activity happens behind a curtain. At best they see only the fully-stocked shelves and give no thought to how the items displayed there reached their destinations, let alone much attention to how they were produced or how they transited the distance in between.

At the same time, it seems perfectly normal to consumers nowadays that they are able to demand–and very often get–cutting edge technology that performs without a hiccup from the first day it is introduced without giving any thought to its origins or the means by which it traveled from it birthplace to their pocket. As Peter Dye demonstrates, this was not always so, and its achievement was greatly facilitated by a wartime revolution. This book is well worth the attention of the serious student of the history of warfare.

Grant is a retired U.S. Navy commander and independent scholar who lives in Charleston, SC.