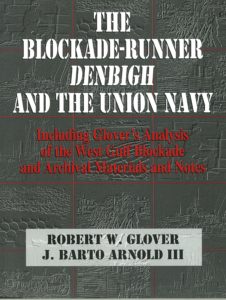 In May 1865, a month after Lee surrendered the Army of Northern Virginia, the blockade runner Denbigh ran aground attempting to enter Galveston Harbor, and was subsequently destroyed by Union warships blockading the Confederate port. In 1998 an archeological study of the wreck began. On-site examination was conducted between 1998 and 2004. Analysis of these findings continues today.

The Blockade-Runner Denbigh and the Union Navy: Including Glover’s Analysis of the West Gulf Blockade and Archival Materials and Notes, by J. Barto Arnold III and Robert W. Glover, is the seventh publication of the Denbigh Project. It examines the Denbigh from the perspective of the blockading Union Navy.

The book’s first section reprints a doctorial thesis by Robert W. Glover: “An Evaluation of the West Gulf Blockade 1861-1865.” Originally written in 1974, it provides a clear and informative examination of the Union blockade during the Civil War. Its focus is the western Gulf of Mexico, especially the Texas coast.

One of the earliest studies of the Texas blockade, it was not replicated until Robert’ Browning’s Lincoln’s Trident: The West Gulf Blockading Squadron in the Civil War was published in 2015. Unfortunately, Glover’s work was largely unavailable until its reprint by the Denbigh Project. Despite its age, Glover’s work merits attention from anyone interested in the Gulf coast blockade. Brief yet comprehensive, it touches virtually all aspects of the blockade.

Glover concludes the Texas blockade was ineffective. These may be overstated. Texas was sufficiently isolated from the rest of the Confederacy as to merit lower priority. Even a porous blockade yielded benefits to the Union. His arguments merit review though.

The book’s next section contains memoirs written by members of the Union Navy serving in the Gulf blockade and archival documents concerning prizes taken during the blockade. The memoirs are brief, reprinted from nineteenth century or early twentieth century sources, offering a blockader’s perspective. This is followed by extracts from the Official Records of the Union and Confederate Navies relating to the blockade runner Denbigh.

The final and largest part of the book (over half) presents documentation associated with the capture of cotton jettisoned from Denbigh after running aground on one attempt to leave Galveston, and the papers associated with the capture of blockade running steamship SS Alabama (a merchant vessel owned by the same company which owned Denbigh, not the Confederate raider). It provides a bounty of records: deck logs, muster rolls, inventories, court proceedings, departmental correspondence, official memoranda, and more, offering a fascinating look at the prize process.

The book is well illustrated, containing hundreds of images. Many are photocopies of pages transcribed in the documents section. Others are period illustrations of the men, ships, places, and equipment of the blockade.

The Blockade-Runner Denbigh and the Union Navy is a specialized book with a narrow focus. It will appeal to those interested in naval activities during the Civil War. Anyone seeking to learn the details of the blockade, whether researching a history or writing historical fiction centered on the blockade will find it invaluable.