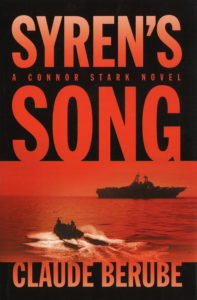 Claude Berube wrote this fictional novel as a reward to students of naval history. Many of the elegant touches, including the name of the ship, spring from the author’s own vivid experience within the United States Navy, where he is currently an instructor at the U.S. Naval Academy, a Ph.D. candidate working on a dissertation on Andrew Jackon’s Navy at the University of Leeds, and the author and editor of several nonfiction books on naval history. He co-wrote A Call to the Sea: Captain Charles Stewart of the USS Constitution (Potomac Books, 2005), as well as Congress: Games and Strategies (Rowman & Littlefield, 2007 & 2009). He was also a co-editor of Maritime Private Security: Market Responses to Piracy, Terrorism and Waterborne Security Risks in the 21st Century (Routledge, 2012). His varied experience working for the United States Navy has included a stint as an intelligence officer, active duty assignments in Europe and the Middle East, and work with two U.S. Senators as well as the Heritage Foundation. He brings this varied experience with both active duty and the world of politics to this novel in a satisfying way.

Readers who enjoyed Berube’s first Connor Stark novel The Aden Effect will find much to relish here. The novel focuses on a small group of characters it is easy to relate to, with most of the attention here being given to the awkward bromance between Connor Stark and the prim and fashion-conscious psychopathic lawman-assassin Damien Golzari, who ends up being the surprising “bad cop” in this good cop-bad cop buddy adventure novel. Berube manages to pay attention to Golzari’s estranged ex-wife, a driven and talented journalist with her own demons, as well as a small host of recurring characters, including the real villain of the story, the Chinese businessman Hu, who promises to be a fixture in the future series if this novel is any indication.

Many have compared Berube to Tom Clancy, but unlike Jack Ryan, it is clear that Connor Stark has no particular political ambitions to serve as the leader of the free world.  Instead, Stark, Golzari, and the other protagonists of this story are people who have been broken in many ways by life but who still seek to serve others and fulfill their responsibilities within our broken contemporary world despite their warped nature and horrific past. This book is full of people haunted by demons—Golzari’s brutal childhood, and the book’s frequent focus on both his increasing ability to dissociate himself from the horror of executing bad guys in clinical fashion and his own repressed but fairly obvious homosexuality, so obvious that Melanie Arden, his ex-wife, feels it necessary to spell out in direct terms to Connor Stark during the book’s meet cute where all of the lead characters are brought together for the first time in Sri Lanka. Yet it must be said as well that not only the book’s protagonists, but also blocking characters, like the insipid Admiral Rossberg, who is blamed for the problems of the US Navy’s ittoral vehicle in the novel, and the would-be Marxist terrorist mastermind Vanni, who is perhaps a bit too invisible for his own good, who are all broken as well by their own vanities as well as the horrors committed against them.

Most people, though, will look at this book not for its vivid characters or the way in which they frequently share a sense of past scars and trauma, even though the author dwells long on these issues as a way of rounding and deepening our regard and sympathies, but rather for this book’s plot. Fortunately, this book delivers the goods on the level of plot as well. Connor Stark is reunited with his beloved borrowed ship from the The Aden Effect and uses its maiden voyage to good effect when he accepts the offer to become a privateer armed with a 19th century Letter of Marque from Sri Lanka’s navy after weaponized hafnium-based rockets cripple their navy in one well-aimed blow. With suitably technical gadgetry such as a faraday cage that serves to protect at least some of its electronics from the ravages of an amped-up EMP attack, to suitably low-tech methods of torture and revenge, like the use of a Scottish knife as a good luck charm, useful in slitting the neck of villainous guards, and with the author’s shrewd discussion of minority oppression, the inhumanity of Marxism, and the malign influence of contemporary China in spreading violence and trouble throughout the world, this is a novel that at slightly over 200 pages of reading is a fast-paced and dramatic read that demonstrates both opportunity and danger. Its suitably enigmatic ending shows a multi-story arc that is continuing that will show the US Navy, American political interests, and the noble mercenary Stark join together in future missions where the secret influence of China is present in more dark doings, something to look forward to reading in the next novel.

Nathan Albright reviews books from his abode in Portland, OR.