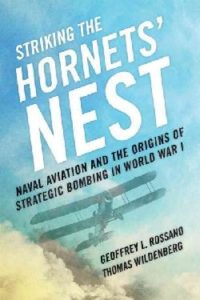 With the centennial of America’s entry into World War I just over a year away, the Naval Institute Press could not have timed the publication of this book any better. It’s understood that World War I introduced new technologies to warfare such as submarines and aircraft. It also introduced the concept of strategic bombing and the authors assert that the U.S. Navy was the first American military force to implement this new doctrine. In doing so, the U.S. Navy followed a path developed by the Royal Naval Air Service that fell short due to lack of resources. To come to this conclusion, which would have Billy Mitchell, Hap Arnold, and Curtis LeMay rolling in their graves, the authors not only examined primary source materials, but also revisited much secondary source literature of the immediate post-war period.

The title of the book is extracted from an exhortation made by a frustrated President Woodrow Wilson to officers gathered in the battleship Pennsylvania in August 1917: “We are hunting hornets all over the farm and letting the nest alone.” The hornets were German U-Boats and the nests were the German submarine pens located in occupied Belgium. With the transport of hundreds of thousands of doughboys and armaments to France pending in the coming months, the U-Boat threat weighed heavy on the president’s mind.

Rossano and Wildenberg argue that the Navy, typically portrayed in that era as a conservative organization with a Mahanian focus on big-gun battleships, in fact embraced naval aviation as the solution to the problem. Striking the Hornets’ Nest offers a reevaluation of Secretary Josephus Daniels and the first CNO Admiral William S. Benson regarding their embrace of naval air power. Both men fully supported the initiatives that were taken to create what would be known as the Northern Bombing Group – squadrons of land-based day-bombing and night bombing squadrons that would continuously assault the German naval infrastructure in Belgium.

Getting there proved to be the near insurmountable challenge. The authors provide detailed analysis of the recruitment, training, transportation, and acquisition of aircraft. In the end, the acquisition of aircraft proved to be the long-pole in the tent. The American industrial base was not capable of producing a domestically produced bomber and the Navy Department had to depend on the British and Italians to acquire Handley Page and Caproni bombers – in direct competition with the War Department. Indeed, Captain Hutchinson Cone, who ran naval aviation in Europe from his headquarters in Paris, found one of the obstacles to acquiring Caproni bombers was a young Army Captain named Fiorello La Guardia, a Congressman and future Mayor of New York, who was sent to Italy to negotiate contracts for the Army.

One area the authors could have delved more into was alternative solutions to the problem. There is a reference to surface ship vulnerability in the narrative, but to what? As it turns out, the British did pursue alternative plans as highlighted by Deborah Lake in The Zeebrugge and Ostend Raids which is also reviewed in Naval Historical Foundation’s Naval History Book Reviews.

That shortfall aside, the authors examination of the challenges that had to be overcame makes Striking the Hornets’ Nest worthy for selection to be added to the CNOs reading list for mid-grade officers as the book chronicles how the staff work of lieutenants and lieutenant commanders cut through bureaucratic obstacles and inter-service rivalries. Rossano and Wildenberg highlight the work of Naval Reserve Lieutenant Robert Lovett who did much of the staff work to put in place the infrastructure to support the bombing campaign. While his efforts, in the end, did little to contribute to the ultimate outcome of the war, the lessons-learned would pay dividends over two decades later when he was the Assistant Secretary of War for Air.

This book should also be considered for inclusion in the Commandant’s reading list as it dedicates chapters to the development of Marine Corps aviation, a military force that sought a mission and found it with Northern Bombing Group. Alfred Cunningham is portrayed as a brilliant organizer and advocate to get Leathernecks into the fray.

In the months leading to the Northern Bombing Group operations, Navy and Marine Corps aviators gained valuable experience though assignments to Royal Air Force fighter and bombing units. Indeed, the Navy’s first and only ace during World War I, David S. Ingalls, earned his victories while flying a Sopwith Camel for the British. Rossano and Wildenberg have produced a most readable narrative with and excellent illustrations that is highly recommended.

Dr. Winkler is the Director of Programs for the Naval Historical Foundation.