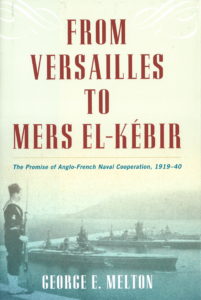 On 3 July 1940, at the direction of Prime Minister Winston S. Churchill and the British War Cabinet, the Royal Navy bombarded a major portion of the French Fleet then in port at Mers-el Kebir in French North Africa. There has been general agreement among historians that this unprecedented attack on a former ally was necessitated by the British government’s fears of the French Fleet falling into German hands following the defeat of France, and was successful in seeing that this did not happen. In his thoughtful and well researched study, author George E. Melton, French naval and diplomatic historian, takes issue with this conclusion, arguing that the attack was neither necessary nor successful.

At the outset, Professor Melton points out that the world’s naval balance of power changed significantly in the period between the two World Wars, brought about in great part by the Versailles treaty that severely restricted the size of the German navy, and by international  inter-war arms limitation agreements. At the end of the First World War the Royal Navy was the world’s most powerful, with protection commitments to an empire that encompassed the globe. The French navy, by comparison, was small, obsolete, and unable to defend its equally far flung colonial holdings.

The inter-war period witnessed a decline in the capability of the Royal Navy, brought about by neglect and by budgetary shortages that permitted no modernization, only replacement of obsolete ships. For their part the French navy, recognizing its inability to protect its Asian colonies, tended to look toward the Mediterranean. There, it saw the Italian navy as a potential enemy and embarked on a construction program of smaller, modern units to counter the threat.

In the 1930s, it would seem then that an alliance of the Anglo-French navies would offer greater protection to both countries against the resurgent German navy and its Italian potential ally. This, however, was made difficult, more by political than military considerations. When operational interests coincided, the French and British naval staffs were able to cooperate successfully, as was demonstrated during the Spanish Civil War against the – presumably Italian “pirate” air and naval units that were attacking  neutral nations’ shipping in Spanish waters.

In the early days of the Second World War, Dr. Melton sees an Anglo-French divergence in both diplomatic and military goals. The British sought to appease Hitler through diplomatic moves such as the Munich agreement, whereas the French chose to confront the threat more directly. The Royal Navy recognized that the German navy was too weak to commit to a major sea battle like Jutland in the First World War, and that it would probably concentrate on commerce raiding throughout the Atlantic Ocean with its new construction “pocket” battleships.

Again, the French Navy was more concerned with the Italians in the Mediterranean than the Germans in the Atlantic. Despite differing strategic objectives, more apparent at the senior governmental level, the two staffs continued extensive staff planning for Anglo-French naval operations. In these discussions, as in earlier international conferences, Dr. Melton wisely gives us an overall picture of the military and political issues involved without burdening us with the minutiae of the negotiations.

With the defeat of France in June 1940, French navy commander in chief, Admiral Darlan, issued orders to the fleet to proceed to French colonial ports, or to British ports, or to prepare to destroy themselves should the terms of the armistice order the fleet to be turned over to Germany. At the same time he assured the British that he would never allow the fleet to fall into German hands, but would safeguard it for France. By this time Churchill had replaced Chamberlain as head of the British government and was taking a much stronger position concerning the fate of the French navy.

It is Dr. Melton’s contention that Churchill did not accept Darlan’s assurances and began urging consideration of force to neutralize the French fleet, an option not favored by the senior officers of the Royal Navy. However, Churchill’s view prevailed and Operation Catapult against the French squadron at Mers-el Kebir was launched.

The attack had two unfortunate outcomes from the British point of view. First, the bombardment failed to destroy the French squadron, a significant portion of which was able to escape to sea. Second, the loss of 1,297 French sailors in the attack turned the remainder of the French fleet into an enemy. There followed, according to Dr. Melton, a concerted effort on Churchill’s part to put a favorable “spin” on what was an avoidable mistake.

In the vast outpouring of studies on the Second World War and its origins, little attention has been paid to Anglo-French naval relations. Dr. Melton’s admirable study, drawing as it does on both British and French archival sources, goes far to rectify this oversight.