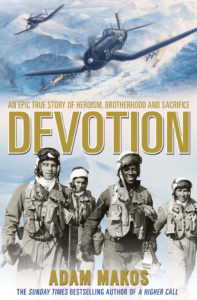 Devotion is the account of an incredibly selfless heroic attempt by Lt. (JG) Tom Hudner to rescue Ens. Jesse Brown after his Corsair was hit by small arms fire forcing him to make a crash landing in sub zero weather in the mountains surrounding the Chosin Reservoir. It is also the story of the tumultuous retreat and escape of Marine/Army/UN ground troops who had temporarily defeated North Korea, as over a million Chinese troops entered the Korean War against UN forces.

Written by Adam Makos, a journalist who specializes in World War II stories of heroism, I was curious about the author’s seven year intense commitment to investigating the Tom Hudner /Jesse Brown story and his intent in writing about this incredible story of heroism while flying close air support strikes over the skies of the Chosin Reservoir in 1952. I wondered if his purpose was an historic documentary, an account based on a true story, or possibly just a good read written with light editing from real life events. So I was delighted when Adam Makos accepted my invitation to dinner where I enjoyed first-hand his most passionate account of the story behind the research for this book. I also learned how Adam, at 15 years old, enthralled with the World War II stories he heard from both his grandfathers, started a newsletter with a few friends which was made up of their interviews of Vets from the Greatest Generation. As the newsletter gained readership and notoriety, Adam began his career as a journalist specializing in telling stories of World War II veterans.

Devotion is his first book written about veterans outside of World War II. The larger story surrounding Adam’s extreme research and extensive interviews make up all of the side bars for ‘the rest of the story’ concerning this epic event that could be a wonderful book in itself. It was a most memorable evening discovering Adam’s passion, sincerity and unusual effort that went into getting the story told accurately. Also apparent in our discussion, was the deep friendship and admiration Adam held for Tom Hudner. This fondness developed during multiple interviews with Tom and Georgea Hudner, and many of Tom’s ship and squadron mates over the better part of a decade. This close relationship between Tom and Adam continues today with regular visits, well after the success of Devotion as a best seller, and the completion of a movie script.

The narrative concept that Adam designed for writing the story captures not just the legacy of these great men, but also a rich and romantic account of the risks and challenges endured in Naval Aviation circa 1950’s and TacAir’s unique and bold culture. For all the aficionados of military and aviation jargon you’ll have to forgive the author for purposely leaving it out. This story’s narrative is written so all readers can experience the exhilaration from the dialog of the story itself, not to be disturbed by trying to understand the context of vernacular or disruptions from use of the Dictionary of Naval Terminology.

It would be an heroic story for any war, but the prism of racism in American culture in the early 1950’s, to include the Navy’s own time-honored segregation, provides the story with far more historic prominence because Ens. Jesse Brown is the Navy’s first African American carrier pilot and the flight lead, and  Lt. (JG) Tom Hudner is his wingman, a white New Englander ‘to the manner born’. Going beyond the ethnicity differences between the aviation duo, the story documents the incredible bond of VF-32 squadron aviators during a life-changing crucible flying combat sorties to aid enemy encircled ground troops. It also documents the Band of Brothers phenomenon where common values of duty, honor, courage, responsibility for oneself, selfless commitment to mission and each other, perseveres over racism and fear. Adam Makos’ Devotion provides great insights into the fabric of Naval Aviation heritage. On one of Adam’s interviews, he asked Tom if he would have done the same for others in the Air Wing. Tom replied, ‘I would have done it for any of the pilots in VF-32.’

For his actions in North Korea, Hudner was the first Navy recipient of the Medal of Honor since World War II, presented on 13 April 1951 by President Truman at the White House. As the Navy prepares to honor Tom Hudner with the christening of the USS Thomas Hudner (DDG 116) next year, it will not surprise the readers of Devotion that Tom Hudner has written to the Secretary of the Navy, Ray Malbus, requesting an Arleigh Burke class destroyer also be named for Jesse Brown.

Devotion has no expiration date.