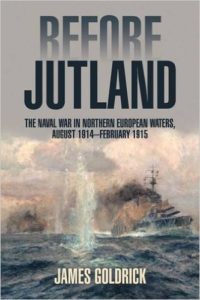 James Goldrick, the author of several books and articles on topics of naval and defense interest, including naval history, is a retired Rear Admiral in the Royal Australian Navy. In 1984, as a Lieutenant, Goldrick published his first book, The King’s Ships were at Sea: The War in the North Sea August 1914—February 1915. His research for that book still forms the backbone for his latest book, Before Jutland: The Naval War in Norther European Waters, August 1914—February 1915. For that reason, if you have not read The King’s Ships were at Sea you could pass on it and read his latest work. On the other hand Before Jutland represents more than just a revision of the previous work so even if you have read The King’s Ships were at Sea, you will find ample reason to read Before Jutland.

There are three reasons Goldrick gives for revisiting his previous work. First, much increasingly sophisticated work by historians and defense experts using archival material not available in1984 had caused Goldrick to update some of his ideas regarding the complexity of the problems faced by navies of the era. Second, the analysis produced over the last thirty years had become increasingly technical having the unintended consequence of diminishing an appreciation of the operational knowledge of the First World War. This is knowledge gained by consulting veterans of the conflict who are almost all gone. What is left is there memoirs, letters, and interviews. Finally, he matured both as an historian and as a naval officer, serving in assignments of increasingly responsibility globally. That experience has tempered his conclusions about the early stage of the First World War. These three dynamics combined such that Goldrick reassessed his judgments, both in the manner that reflecting on history informed the operational problems of his day, and also with respect to the insights his experience gave him into the problems faced by those a hundred years ago. This review looks at how Goldrick addressed each of the above reasons in Before Jutland.

Revisions throughout the book acknowledge and incorporate recent scholarship and recently available archives, which is also reflected in a greatly expanded bibliography. Before Jutland includes new insights on both British and German naval developments, leadership, and the political landscape. Goldrick also covered these topics in a new chapter on the Russian naval situation. This gives a richer and fuller appreciation of the dramatic changes leaders struggled with during the era. The chapter on Russia was intended to help the reader understand that the German/Russian dynamic in the Baltic Sea factored into German decisions over what could reasonably be risked with respect to naval action against the Royal Navy in the North Sea.

Goldrick makes the case that the Germans had a choice between retaining naval superiority against the Russian foe in the Baltic Sea, and with that maintaining trade with Sweden, or weakening naval forces in the Baltic in favor of attempting to change the balance against the Royal Navy in the North Sea. On page 71, Goldrick indicates Germany had made a clear choice early in the war that the priority must be the North Sea. That should have driven Germany’s naval strategy but, given that German Naval leadership was splintered with power divided among several factions, Germany never committed to that course and hedged, often placing much of German naval power in the Baltic. That incoherence in national strategy led Germany to experiment with mine warfare, submarines, and air power—all in attempts to attrite the British fleet, whose numbers the Germans would never match.

Goldrick also took the British to task for an incoherent national strategy. That being said, the Royal Navy’s problems lay more in its inability to execute naval operations. The British struggled with coordinating the movements of large fleets consisting of new and old ships with varying technology causing them to miss opportunities to defeat the Imperial German Navy when it did sortie. Moreover, the Royal Navy had much difficulty determining the extent of the threat posed by submarines and mines, initially underestimating the threat and then when some ships were lost overestimating the danger to the fleet. Goldrick does a commendable job highlighting the experimental nature of naval warfare at the time and the challenges it presented in not only in understanding developments in warfare but also in devising practical solutions. In all of this, Russia comes off as a minor character, which the author acknowledges. The book is German and Anglo centric. Baltic operations and the part Russia played were included to enhance understanding of what transpired in the North Sea. Goldrick has this balance right for his purposes and his book succeeds here.

Before Jutland includes a chapter on operational challenges. Goldrick’s description of the conditions at sea, the difficulty of navigation and coordination between ships given the technology available, and the toll exacted on ships and men is brilliantly done. The reader is left with a clear context that Goldrick leverages to help explain decisions made and outcomes that emerged throughout the operations described in the remainder of the book. This is most evident when Goldrick discusses the Battle of Dogger Bank near the end of the book. On his second reason for writing, Goldrick again delivers.

Another new chapter on war plans disappointed. In his notes, Goldrick acknowledges the new scholarship and the divergent opinions in scholarly circles concerning war plans. He ably summarizes these ideas but fills much of the pages with background biographical information on British and German senior naval officers that offer no real insights on war planning. What I hoped for was Goldrick’s assessment on what ought to have been the plans based on his understanding of the historic context. Given his professional naval experience, Goldrick is in a position to render judgments here that most historians could not do as well. I would particularly have desired Goldrick’s opinion as to whether the German’s choice to make the North Sea the primary theater over the Baltic was prudent strategic risk given their naval inferiority compared to the British and relative superiority to Russia. At any rate, he succeeded in getting me to think about that choice. He could have placed such an assessment in his Summa, which includes many such appraisals that do not flow naturally from the evidence presented throughout the chapters.

One understands that these are the practical professional judgments of a senior naval officer gleaned over years of naval duty in various geographies, honed by a reflection on history. The value of the Summa is that the reader benefits from the insights that he has taken from history to inform his decision making and how his wealth of professional experience helps him understand the context of decisions made at the time. This is a veritable gold mine for professional naval officers so the book also delivers on Goldrick’s third reason. I just found myself wishing the vein went deeper.

I recommend the book to anyone interested in the First World War and naval history, whether professional historian, professional naval officer, or popular history enthusiast. I expect that the book will have more appeal to the first two rather than the latter. It is a commendable work that does much to fill in the details of the early war.