Members and friends of NHF came together for an evening to celebrate the accomplishments of the Foundation over nine decades and to honor its celebrated leaders. 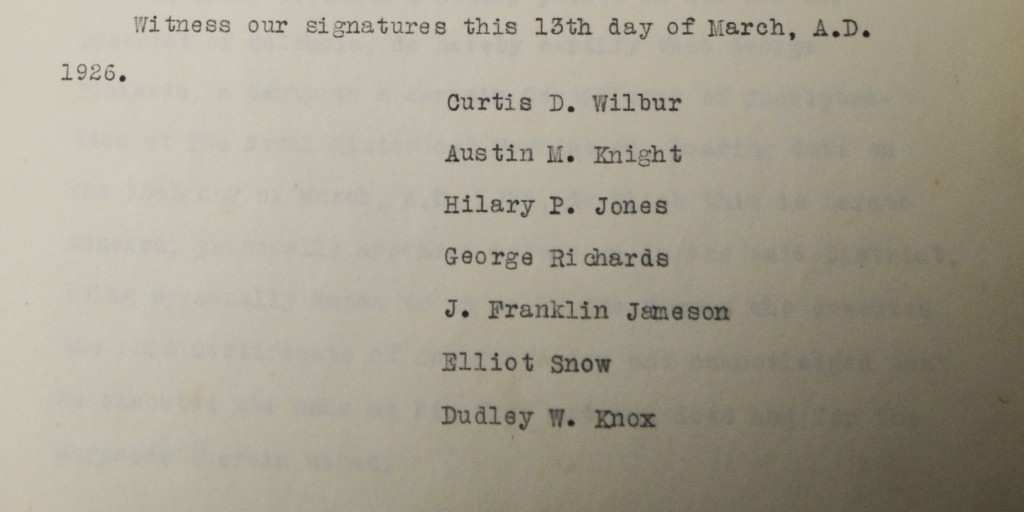 The original seven individuals who signed the Naval Historical Foundation’s certificate of incorporation typed from the first meeting minutes on 23 March 1926. (NHF photo)

It all began with a number: 7.

It was these seven notable Navy civilian and military leaders who signed the certificate of incorporation ninety years ago on 13 March 1926 that created the Naval Historical Foundation. For members of NHF, we owe our thanks to those seven individuals who saw the need to create an organization “in the interest of American Naval History and of the fostering of patriotism, the collection, acquisition, and the preservation” of the “history and traditions of the United States Navy.”

That guiding principle has remained the same over the course of nearly a century of preservation, education, and commemoration. Friends, colleagues, and members of the NHF family came to the National Museum of the United States Navy on 23 March to honor that legacy and look towards a bright future for the organization and its constituents.

The NHF anniversary reception held in the National Museum of the United States Navy’s Cold War Gallery was for the Foundation’s many members, and attendance that evening represented a remarkable cross-section of naval history. Each member plays a pivotal role in how we continue to understand and support our naval heritage. Indeed, it is no surprise then that NHF has remained a cornerstone for the creation, publication, and dissemination of naval history for nearly a century. Former employees of the Foundation, several who currently work for the Naval History and Heritage Command, came to the event to show their support as they continue to work in the naval history field. Several prominent naval historians representing the past and present scholarship of the United States Navy were also present, including four former recipients of the Dudley W. Knox Award for Lifetime Achievement in Naval History; Dr. Craig Symonds, Dr. Harold Langley, Dr. Bill Dudley, and LCDR Tom Cutler.

Festivities began with a special birthday video greeting by NHF Chairman Emeritus Admiral James L. Holloway III, USN (Ret.), who recently turned 94 and was unable to attend the the events at the historic Washington Navy Yard.

Knox Medal recipient and award-winning author and historian Dr. Craig Symonds followed with a brief yet insightful lecture on the history and significance of the Foundation’s 90-years, noting several individuals who “played important, even essential, roles in founding, maintaining, and sustaining the Foundation.” The first individual Symonds mentioned among his list of influential members was Dudley Knox, one of the seven original signatories of the Foundation’s 1926 Charter. He described the naval officer and historian and his enduring legacy to NHF:

“It was his enthusiasm and determination that was the driving force behind not only the founding, but also many of its early accomplishments.  All naval historians will be forever in his debt.  The sources we now often take for granted might not exist at all if he had not sounded the alarm, and they might not have survived if the dedicated group of founders did not have the clarity of vision to see that the past needed to be preserved, not merely in the form of several iconic and historic vessels like “Old Ironsides,” and places like the Decatur House, but also and perhaps especially in the paper record of the Navy’s founding, its rise, its occasional lapses into torpor, its internal quarrels, and its external triumphs.” 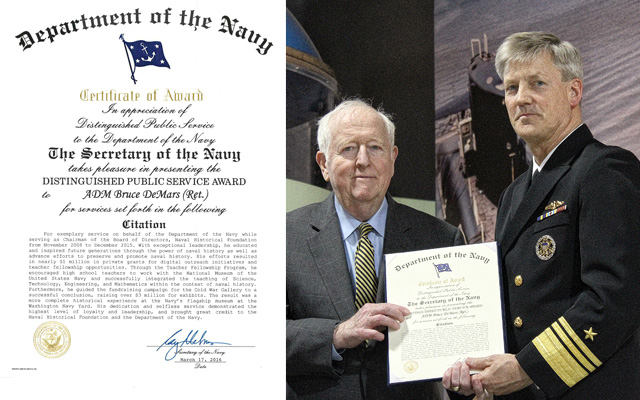 Such an award is truly fitting for the body of work completed by the Naval Historical Foundation under DeMars’ tenure. During his seven years as Chairman, the Naval Historical Foundation initiated several new awards and programs, most notably the aforementioned Knox Award and STEM-H Teacher Fellowship Program. NHF also completed a series of major exhibits in the Navy Museum’s Cold War Gallery. DeMars leaves the Foundation on course to return to its core mission to educate, preserve, and commemorate naval history with a goal of increasing our presence in the digital sphere and creating new educational initiatives.

DeMars, in his usual cool and calm demeanor, humbly accepted the award by thanking the Foundation’s loyal and generous membership base and staff members who continue to keep the Foundation going at full speed. Although Admiral Fallon acknowledged the “big shoes he has to fill” following DeMars’ tenure, the former Chairman made note that his successor is the “perfect candidate” for the job. From one four-star to another, NHF remains in good hands. The anniversary reception ended with a ceremonial cake cutting by admirals DeMars, Fallon, and Thomas. 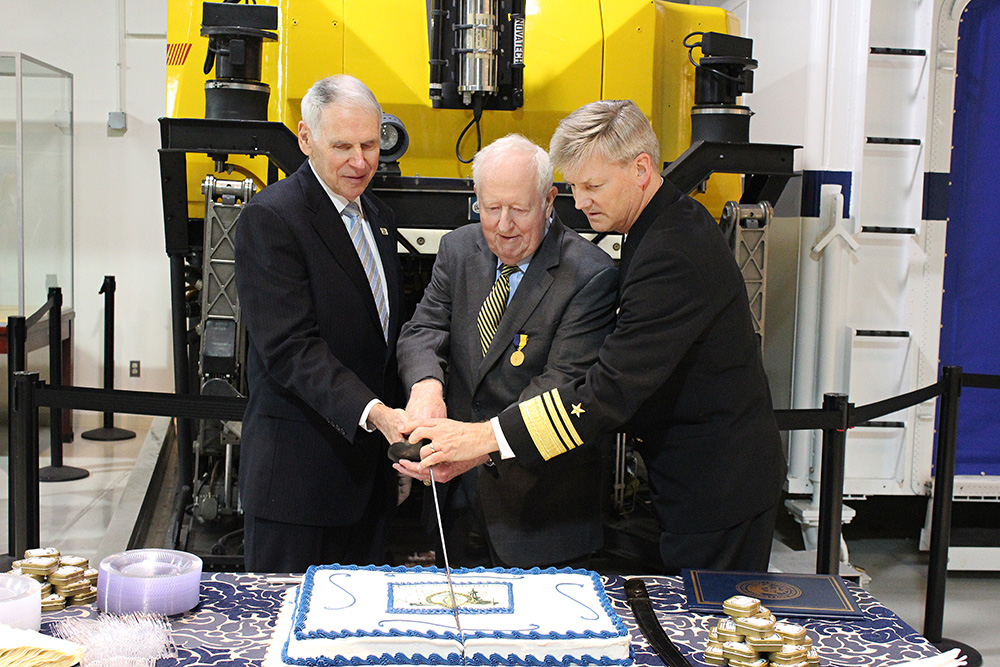 Following the reception, Foundation leaders, advisors, donors and volunteers came together in the main Navy Museum for a special anniversary dinner. 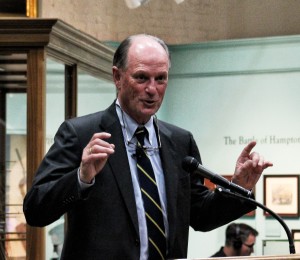 National Geographic Explorer in Residence and Ocean Exploration Trust Founder Dr. Robert Ballard took time out of his busy schedule to speak to guests at the dinner about the ongoing work done by his “Corps of Exploration.” Dubbed the “Victory at Sea” Task Force, Dr. Ballard has a robust plan to range across the Pacific Ocean in the next few years to search for geological and biological features as well as locate a variety of ship wrecks from the Second World War, including most notably the enigmatic USS Indianapolis. This is a remarkable new initiative for Ballard, known for his discovery of RMS Titanic, German battleship Bismarck, Battle of Midway aircraft carrier Yorktown, and President John F. Kennedy’s PT-109 and his frequent deep dives to examine deep ocean vents and the remarkable life forms that inhabit their vicinity. NHF staff members have been working with both Ballard’s team and the United States Navy to help pinpoint a high probability search area for Indianapolis. Stay tuned to both the NHF homepage and the Nautilus Live website for updates as Ballard’s expeditions continue along the west coast of North American and then head west into the vast Pacific. Dr. Ballard also took time to reminisce about his experience working with Admiral DeMars years ago, detailing how a covert, Navy-authorized mission to survey the wreckage of U.S. nuclear submarines led to the discovery of Titanic.

Following the riveting dinnertime lecture, Admiral DeMars presented Senator John Warner with the Foundation’s inaugural Chairman’s Award for recognition of his lifelong support, both in uniform and in Congress, for naval history and heritage in general and the Naval Historical Foundation in particular.

Warner warmly accepted the award from DeMars and took no time at all in making good on that continued promise of support by donating two items from his personal collection to NHF: a wooden chair used at the Portsmouth Naval Shipyard in Kittery, Maine, during the peace negotiations to end the Russo-Japanese War, and a one-of-a-kind, oversized Under Secretary of the Navy flag produced for prominent visibility during James Forrestal’s visits to the troops during the Second World War. 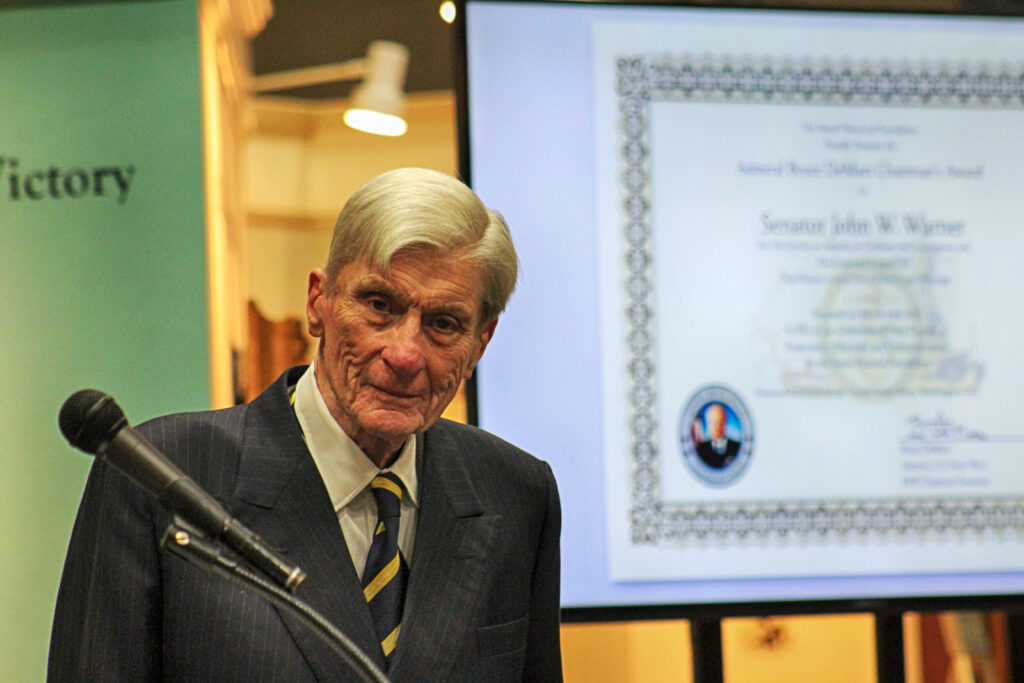 Senator John Warner with the Chairman’s Award in the background. (NHF Photo)

In his brief acceptance speech, Senator Warner made a point to first recognize his wife Jeanne, who he affectionately called his “chief of the boat.” and whom he praised for her guidance and thoughtfulness over the years.

Taking a cue from Warner, Admiral DeMars concluded his remarks by thanking his wife Margaret and all Navy wives and partners who stood the long watches at home while their spouses carried out the Navy’s business around the world.

Admiral Fallon then closed out the evening by thanking the 60 plus guests for their attendance and their long term support for the Naval Historical Foundation—and asked that that support continue as the Foundation embarks on new projects in support of the mission to “preserve and honor the legacy of those who came before us, and educate and inspire the generations who will follow!”

A special thank you to Jim Devito and Kyle Nappi for their help in putting on this event.