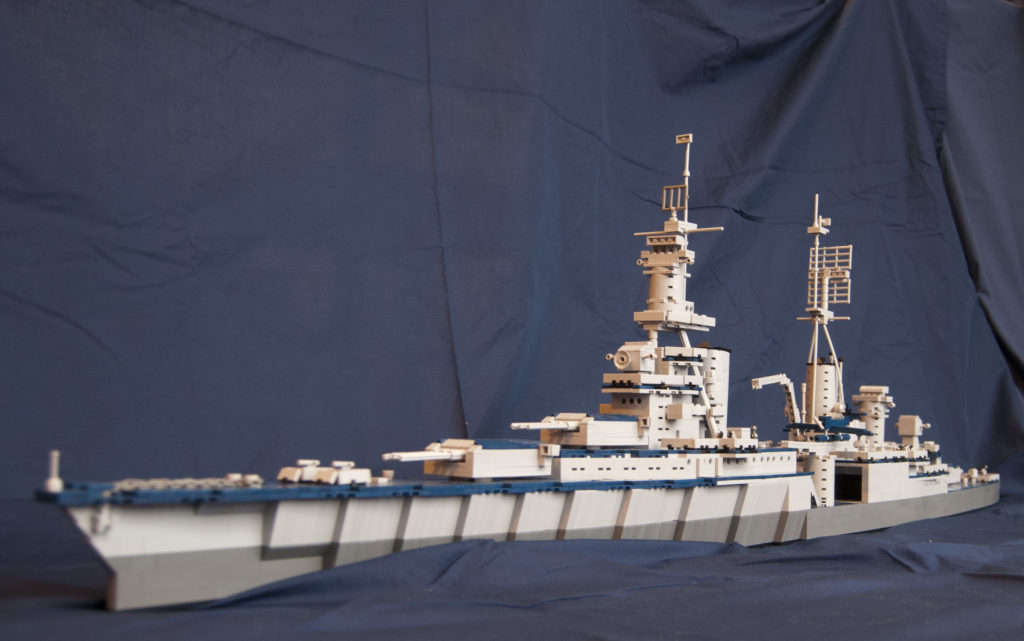 If you are a fan or follower of the Naval Historical Foundation, you know that NHF has been involved with the Hampton Roads Naval Museum’s (HRNM) blockbuster LEGO Shipbuilding event for several years. The generous donation NHF provided this year to HRNM helped pay for a large quantity of DUPLO bricks for the event’s “youngest naval architects” and two LEGO EV3 Mindstorms sets. Our continued participation with this event helps fulfill our continued commitment to STEM and its correlation to naval history.

Former NHF staff member and current NHHC Photo Archivist Dave Colamaria has become a fixture to HRNM’s yearly signature event. Dave, an amateur LEGO model builder and enthusiast, has showcased many of his builds down in Norfolk both as a competitor and exhibitor. This year will mark the fourth appearance for Dave and his family, and the third ship model overall built specifically for the event.

Dave took some time out of his busy schedule to share some behind-the-scenes images of his third LEGO ship model and explain why he chose it as his contribution to this year’s shipbuilding event. 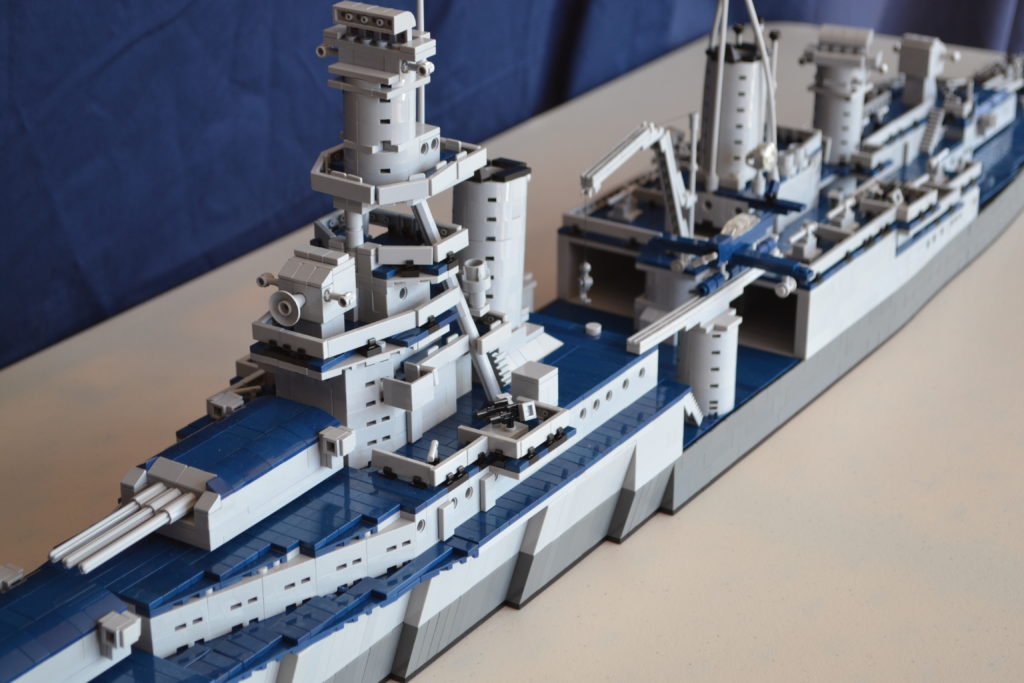 NHF: This is your fourth year showing your spectacular ship models for the HRNM LEGO Shipbuilding Competition. What is your reasoning behind doing USS Indianapolis this year?

DC: I checked around and didn’t see many other Indianapolis LEGO models. It is surprising how difficult it can be today to find an historic ship without a model. There were a couple Indianapolis models that had been done, but I wanted to do it because the ship means a lot to me personally. Indianapolis is the reason why I am in this profession as a photo archivist for the U.S. Navy. I was watching a documentary on the ship thirteen years ago, and the ship’s doctor [Captain Lewis Haynes, MC, USN (Ret.)] his story really moved me – it both inspired and disturbed me. It got me to start to look into my grandfather’s WWII Army history – that eventually led me to my job working for the navy.

I am where I am now because of this ship and this story.

NHF: In the past, you have created a Fletcher-class destroyer, an Iowa-class battleship, and the carrier USS Lexington. Was this cruiser build easier or more difficult than your previous ones?

DC: When I do one of these big projects for this event, I have to remember what I am doing all over again. I learn new things and develop new tricks each time I do it.

NHF: Does that come from your past career as an engineer?

DC: The engineering does help. I use original blue prints to make a scale for the LEGO bricks that I need to purchase to build it.

NHF: How many bricks did it take to build USS Indianapolis (approximate)?

DC: There were approximately 5,000 bricks for this model. It is also five feet long. 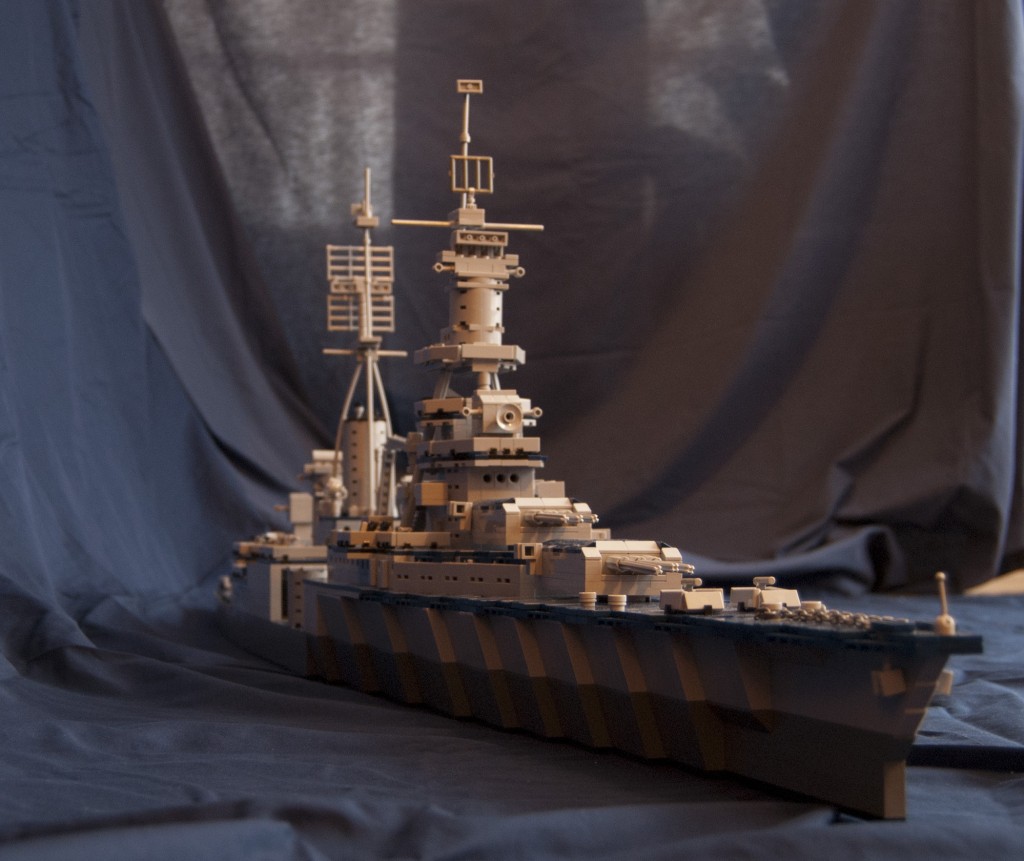 NHF: Anything else you would like to add about your model?

DC: The color scheme was difficult to match. The problem with this ship was that there are very few photographs of it. As a photo archivist, I know that most of our photos come after a ship is decommissioned. As a sunken ship, Indianapolis was never decommissioned. I did my best to research and match the paint scheme – roughly measure 22 camouflage. The pieces used did not exactly with the colors, which is why you have a color that closely resembles blue. Design-wise, the ship is roughly in its configuration when it sank. I chose to leave the lifeboats off as a tribute to those who didn’t make it.

Any indications for future projects for the competition?

Dave will be showcasing this model along with his previous models shown at the event (USS Lexington, Fletcher-class destroyer, and Iowa-class battleship) at a special table inside the Half Moone Cruise and Celebration Center next to Nauticus in Norfolk. Make sure to go over to the Hampton Roads Naval Museum’s Facebook page for more information about this fantastic event. And if you haven’t heard about our connection to HRNM LEGO Shipbuilding from the very beginning, make sure to take a read at the event’s history here on the NHF blog.View all of Dave’s photos on our Flickr page.