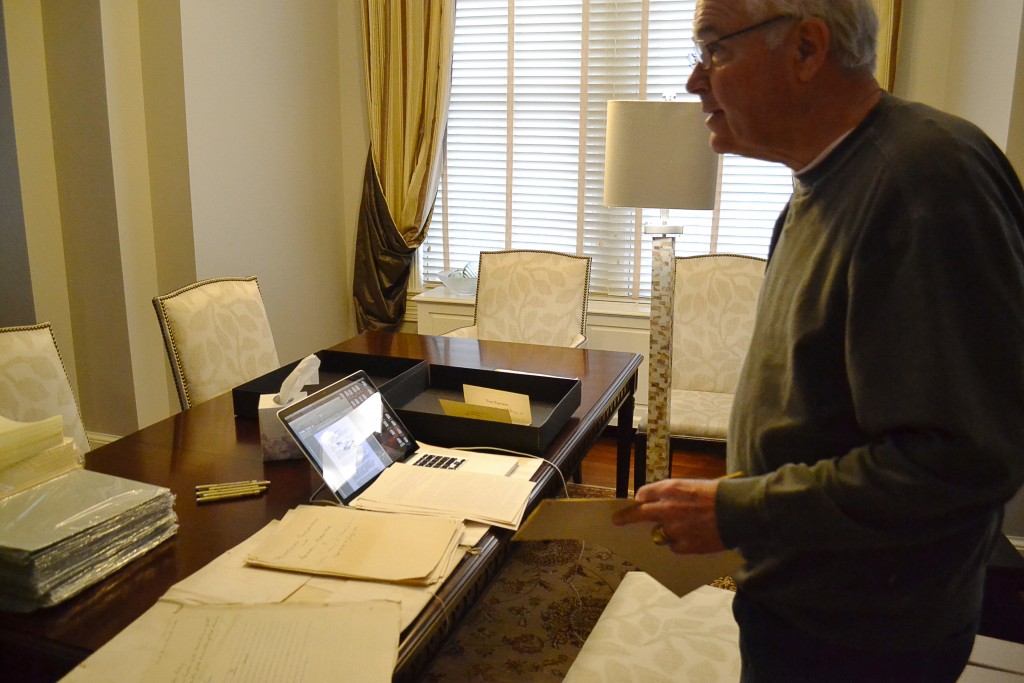 In 2016, the Naval Historical Foundation will celebrate its 90th year as a non-profit institution. As a testament to our Foundation’s principle to preserve, educate, and commemorate, we want to highlight stories where we are actively seeking out ways to keep naval history alive for generations to come.

As the United States begins to commemorate the Centennial of the First World War, conferences, events, exhibits, and programs are cropping up around the country. The nation is abuzz with anticipation for these efforts, spurred by the recent announcement of the winning design for the National World War I Memorial.  For researchers, it is more important than ever to read first-hand accounts of the experiences of sailors in the United States Navy during the late nineteenth and early twentieth centuries. The Navy Department Library has recently received two such collections of documents that highlight the careers of two naval pioneers, one of whom played a key role in the success of the emerging American submarine force during World War I, and, perhaps more importantly, in the improved capabilities of the submarines and the training of their crews that would so dramatically influence the successful conclusion of the war in the Pacific in 1945.

The two large collections of professional correspondence and records are from the lives and naval careers of Rear Admiral Henry Forry Picking, USN (1840-1899) and his son, Captain Sherwood Picking, USN (1890-1941). The collections cover the period from the end of the Civil War through the years immediately prior to World War II. In all, the combined collections numbered 31 individual boxes donated by Susan Hamill and Sarah Helyar Chester, two Picking family descendants. Thanks to generous donations by Susan, Sarah, and several other family members, the Naval Historical Foundation was able to fund the travel and accommodations for former NHF Vice President, retired Vice Admiral George Emery, to travel to the Navy Yard from Maine to catalog the collection and provide the Navy Department Library with a detailed description of its contents from which the Library will develop a finding aid for future research purposes.

When Admiral Emery, a career submariner in the nuclear navy, became aware of the Picking collection he offered the experience gained from cataloging other collections on behalf of the Naval Historical Foundation including those donated by the Rodgers family and by Rear Admiral George Henry Preble, to do the same for the Picking family papers. Donations of personal collections such as those of the Picking family help us to better understand the history, and the rich and proud heritage, of the United States Navy.

Sherwood Picking’s father, Rear Admiral Henry Forry Picking, enjoyed a notable and varied career in the often-tumultuous post-Civil War Navy. In the years following the end of the war, he served with the Asiatic Squadron between 1870 and 1873. Interestingly, VADM Emery notes that photographs included in a folio compiled by Henry during that time period were likely “taken during the action between the Koreans and the Asiatic Squadron in May-June 1871.” To Emery, the photographs “may well add to the history of the U.S. Asiatic Fleet during their Korean action.” Picking later served as Hydrographer of the Navy (1889-1891) and as the head of the Office of U.S. Light-House Inspector, Third District (1891-1892). Towards the end of his naval career in the mid-1890s, he served as Commander, South Atlantic Squadron, and Senior Officer Present in Rio de Janeiro aboard his flagship, USS Charleston, during a tension-filled mutiny of the Brazilian Navy, a mutiny recorded in detail in Henry’s papers. Other assignments included navigator on RADM John Rogers’ flagship USS Colorado, commanding officer of USS Kearsarge (1879-1881), the receiving ship USS Minnesota (1895), and finally the receiving ship Wabash (1898) just prior to his death in 1899.

Henry’s son Sherwood followed in his father’s footsteps, choosing a career in the Navy. After graduating from the Naval Academy in 1911, Ensign Picking briefly spent time aboard USS North Dakota (BB 29) before beginning his storied career as a submariner. His papers, charts, diaries and correspondence are incredibly valuable to understanding the development of the early submarine force. Prior to his involvement with the Atlantic Fleet during World War I, Lt (jg) Picking spent time in the Asiatic Fleet as Commanding Officer of the submarines A-6 (USS Porpoise), A-7 (USS Shark), and B-2 (USS Cuttlefish). His descriptions, drawings and photographs provide a unique history of the emergence of the American Asiatic Submarine Force in the second decade of the 20th century.

During the First World War, Sherwood was one of a handful of bright young Navy lieutenants sent to Europe by the Chief of Naval Operations to observe, first-hand, wartime operations at sea on allied submarines.  Lieutenant Picking’s lengthy and detailed report proved invaluable to the future design of American submarines, particularly their periscopes, and to the future methods of training their officers and crew.

Near the end of the war Lieutenant Picking was awarded a Navy Cross for his heroic action as the Commanding Officer of USS O-10 during hazardous duty patrolling the waters off the Azores amidst enemy submarines, destroyers, and mines. He continued to command submarines into the 1920s, interspersed by short tours aboard battleships USS Arizona and USS Texas before commanding the submarine squadron and base at Coco Solo, Panama, in 1939. His last duty took him to Washington, D.C., where he was the Assistant Director of the Office of Naval Intelligence. Regrettably, Sherwood was killed in a plane crash over Scotland en route to London for duty as Assistant Naval Attaché in September 1941. The Fletcher-class destroyer USS Picking (DD 685) was named in his honor.

With the Picking documents now catalogued by VADM Emery, the task shifts to Glenn Helm and his staff at the Navy Department Library to format the catalog into an online finding aid in the weeks and months ahead.

A very special thanks to Susan Hamill and Sarah Helyar Chester for their generous donation of valuable documents and the rest of the extended Picking Family (Will Hamill, Anne Hamill, Sherwood Hamill, Elizabeth Hamill, and Frances Helyar) for providing funds to make this project possible!