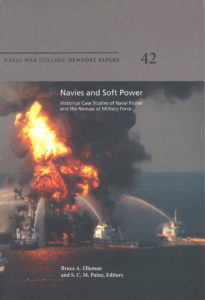 Although each paper in this collection contains a disclaimer that the “thoughts and opinions expressed [. . .] are not necessarily those of the U.S. Government, the U.S. Navy Department, or the Naval War College (198),” it is very clear that these essays were collected together with a clear intention to influence policymaking and gain support to fund the US Navy in an era of sequestration and retrenchment.  While it is not clear whether this book is intended to influence decision makers directly or is expected to serve as a selection of well-written and thoughtful arguments for those people who will be interacting and lobbying on behalf of the Navy, this is a collection of essays that appears well-designed to reach its intended audience, whoever that might be. At 200 pages, it does not make for a demanding read while presenting a wide-ranging case for the importance of a robust navy in order to conduct nonmilitary operations that serve humanitarian and larger political and diplomatic aims.

In terms of its presentation, this book is filled with helpful aids so that the reader understands the points that the editors are making in this collection. The editors discuss the fact that navies have been used for more than fighting wars since at least classical times with anti-piracy efforts in Greek and Roman times. At the other end of the book, the editors make a somewhat lengthy conclusion that shows the various non-force uses of navies discussed in the previous essays, spelling out precisely what kind of lessons can be learned and applied for the future uses of the U.S. Navy, and also the Chinese navy.

Each of the nine essays in this collection are tailor-made to appeal to a nontraditional audience in terms of defending the legitimacy of the navy as an institution worth funding and supporting.  The first essay discusses the efforts of the sloop-of-war Constellation to interdict the Transatlantic slave trade between 1859 and 1861, demonstrating the need for effective naval forces to defend human rights abroad. The second essay discusses the obscure and deeply secret, and successful, efforts of the U.S. Navy to use an overwhelming concentration of force to deter German aggression against Venezuela. The third essay examines Herbert Hoover’s successful but difficult efforts at feeding civilians in occupied Belgium and Northern France despite the threats of submarines and mines that gave Great Britain cover in starving the Central Powers through a blockade during World War I. The fourth essay looks at the unsuccessful efforts of the United States in deterring Japanese aggression that ended up boomeranging into open warfare because the Japanese military leadership felt it had no way to back out and save face and their own positions.  The fifth essay gives a poignant discussion of the successful efforts of the U.S. Navy at providing humanitarian assistance and refugee resettlement after the fall of South Vietnam. The sixth essay discusses the environmental and financial benefits of using derelict naval vessels as artificial reefs in areas as far flung as Southern California, Florida, Delaware, and the Cayman Islands, discussing the regulatory challenges to such efforts as well.  The seventh essay discusses the importance of properly studying the cause of strandings and the effect of sonar use on marine life, and the political problems involved in environmental activism relating to naval activities. The eighth essay provides a detailed examination of the efforts of the Coast Guard-led response to the Deepwater Horizon oil spill in 2010, and the way these efforts taxed both public and private capabilities in disaster relief and building goodwill and political capital with affected parties in the Gulf Coast. The ninth and final essay examines the political and diplomatic capital as well as the practical experience developed by the Chinese navy through its enthusiastic involvement in anti-piracy efforts in the Gulf of Aden.

The conclusion summarizes these points and then adds another one by showing the Nobel prizes awarded to those researching through grants from the Navy in basic scientific research, showing another nonmilitary use of the Navy that is worthy of being recognized and continued.

Towards the end of this book, the editors make a broad-based case for preserving naval capabilities in the broadest possible way by commenting that

“many nonmilitary operations involving naval task forces or fleets-in-being can help keep ships in readiness for war. Even while performing useful missions of a nonmilitary nature, crews continue to train for duties essential to warfare. If these humanitarian missions can supplement training exercises, and in particular if some activities turn out to be even more useful than training exercises, they will be viewed in a different financial light—that is, as maximizing tax dollars by incorporating dual-use missions and training (197).”

This short but powerful book, with essays written by contributors with a broad array of research interests within the Navy and Coast Guard establishment and broader academia, has a broad scope of nonmilitary operations that the U.S. Navy has excelled at, but a clear purpose in making sure that the Navy and Coast Guard remain able to address humanitarian and environmental concerns in the future as well.

Read All of the Naval War College Newport Papers