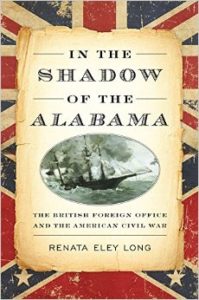 Built and launched at the Laird shipyard in 1862, CSS Alabama became the most notorious of the Confederacy’s commerce raiders, devastating Union merchant shipping and contributing to an irreversible “flight from the flag.” Her career ended two years later at the famous battle of Cherbourg (19 June 1864), when she engaged with and was sunk by the Union sloop-of-war Kearsarge. The saga of the Alabama had monumental diplomatic consequences, becoming an intense source of Anglo-American tension during the Civil War. Seven years after Appomattox, the “Alabama Claims” were resolved by international arbitration, which awarded the United States $15.5 million in damages.  Many writers—including Renata Eley Long—see the settlement as a turning point in Anglo-American relations, a significant step toward the “Great Rapprochement” of the late 19th century.

For the past 150 years, journalists, participants, and historians have explored and weighed the drama surrounding the building and escape of the Alabama. How was it able to avoid British authorities and escape into international waters, to be refitted, armed, and christened a Confederate cruiser? Renata Eley Long’s approach can be summed up in three quotations from her book. First, the sub-title, “The British Foreign Office and the American Civil War,” suggests where her focus will be. Almost immediately, she zeros in on Victor Buckley, a clerk in the British Foreign Office, claiming in the introduction (p. 2) “fresh evidence from hitherto neglected sources now point to the interesting conclusion that the young Foreign Office clerk was anything but insignificant.” Finally, at the end of the narrative, she describes the drama as “a story full of coincidences and unexpected connections.” (p. 210)

In its best sections, In the Shadow of the Alabama provides a rich picture of the “web of espionage” that the construction of “number 290″ set off. There were indeed “moles” everywhere, and many well-known figures were connected. Long is very good at presenting the human aspect of these activities: what motivated people; why they did or did not do certain things; what they were likely thinking. When she finally gets to the escaping ships, the drama is indeed high and well told. All in all, these parts of the book enrich one’s understanding of the events and emotions of the moment and the human element in foreign relations—which is easily forgotten when one immerses oneself in the official but generally dry diplomatic dispatches about an issue.

At the same time, Long’s approach includes some frustrating features.  For her, there are no irrelevant details; everything is connected to everything else. As a result, Alabama and the international drama sometimes get lost in a welter of details and names. In the first few chapters, for example, Long paints a very full and detailed picture of the background to the story—but sometimes the reader wishes she would hurry up and get to the main issue: Victor Buckley’s role in the escape of the Alabama. Long seems to know and love every small detail and intersection of her topic. Everyone is apparently connected to everyone else in some way. Hence, there are many fascinating tidbits, but tidbits that could have been relegated to footnotes: sections on novelist Charles Dickens, or Foreign Office copyist Charles Marvin, or Arthur Conan Doyle, who wrote a novel whose title character, according to Long, was “undoubtedly based” on Victor Buckley. The penultimate chapter (19) becomes a series of paragraphs describing, one by one, what happened to everyone after the Florida Claims were resolved.

Two other quirks of the book. First, Long depends excessively on hypotheticals and subjunctives: “Events suggest” or “it is reasonable to assume that” or “if” are frequently employed in her reconstruction of the evidence. In discussing the escape of CSS Florida, for example, Long admits that there is no evidence for Victor Buckley’s role in the escape but then also asserts that there was a role.   A second quirk is the appearance. In her discussions of the Freemasons in the last quarter of the book, she posits a 21st century version of the 19th century “Freemasons are everywhere” theory. In Long’s version of the story, Freemasons appear to be the secret forces behind all the postwar negotiations. According to Long, they are the ones who resolve the controversy because every other person involved in resolving the Alabama Claims was a Freemason.

To construct her story, Long has used standard secondary sources, published collections of letters, the Official Records of the Union and Confederate Navies series, and a small amount of archival material. Curiously, she discusses Henry Hotze’s pro-Confederate propaganda newspaper The Index at length. She has apparently not read the actual publication, because she cites secondary sources rather than the newspaper itself, which is available online in PDF format.

Overall, this quirky study is an incorporation of diplomatic history, maritime history, and genealogy. Its stories of the intersections of the rich and famous bring together an example of history as a series of coincidences or unexpected intersections. It is both delightfully engrossing and annoyingly frustrating. The biggest historiographical objection might be that coincidences do not amount to causation, and Long seems to believe that they do.

Ultimately, Long concludes that Victor Buckley, the Foreign Office clerk, probably was the person who tipped off the Alabama so that it could escape before being captured. But once one moves beyond all the hypotheticals and coincidences, that conclusion is still questionable. In her acknowledgements, Long speaks with admiration of the late Frank Merli.  But in The Alabama, British Neutrality, and the American Civil War (2004), his final work (assembled by David Fahey from unfinished manuscripts), Merli argues that it was simply luck—not a conspiracy—that enabled the ship to escape. The question, therefore, remains unresolved and is likely never to be settled.

Dr. Blume teaches at the Albany College of Pharmacy and Health Sciences.