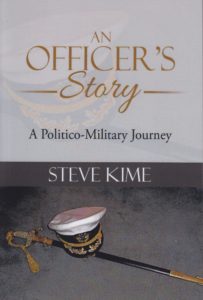 By Steve Kime, Authorhouse, Bloomington, IN (2015)

One of the benefits of managing Naval History Book Reviews is that I get first dibs on incoming titles. Two decades ago, I interviewed Captain Steve Kime regarding his involvement with the Incidents at Sea Agreement negotiations and execution. He shared some insightful stories of his tenure first as an Assistant Naval Attaché and then Naval Attaché to the Soviet Union. He happily chose to self-publish these stories and more. When An Officer’s Story arrived at the Naval Historical Foundation, I grabbed it.

Perhaps at age 74, having already had one close call with the grim reaper, Kime decided to throw in everything including the kitchen sink into this book. He divided An Officer’s Story into two thematic approaches that are reflected in alternating chapters. The first theme is a memoir covering his youth and more than three decades of service to his country. The second theme is his personal worldview on what is wrong with the universe, how we got there, and suggestions on where we need to go. With his Kentuckiana upbringing, an education that includes a Harvard Ph.D., and real-world experience, Kime has the intellectual chops to provide constructive insights. Unfortunately, I am not sure that this book was the best forum to present them.

The advantage of doing a strict memoir is that the book is never dated. Fifty years from now, the book will remain relevant as a historical account of the life of a naval officer in the late twentieth century. On the other hand, his views on current topics ranging from homosexuality to whether the Naval Academy should play Division I football will quickly date the book.  Unless the author is writing a campaign biography for public office, such commentary is better slated for blogposts or articles in journals such as the Naval Institute Proceedings. Indeed, Kime has been a frequent contributor to Proceedings and other journals. Fortunately, the memoir portion is well worth reading as Kime is a good storyteller and he had a most unconventional career path.

A valuable lesson learned in this narrative is the actions you take early on may have positive consequences throughout your career. In Kime’s case, his study of Russian and participation in an exchange trip to the Soviet Union during his time at Louisville proved beneficial. Commissioned in 1962, Kime joined a submarine force that still ran on diesels. That would change in the next decade, leaving Kime outside of the standard warfare community career path. Instead, he applied for and was accepted for the Navy’s graduate program in international affairs and attended Harvard. He earned a Ph.D. under the supervision of noted Russian scholar Adam Ulam. His nuanced explanation of the function of a naval attaché and discussion of his travels to the four corners of the Soviet Union with William Manthorpe (See our December 30, 2014 review of Manthorpe’s A Century of Service: The U.S. Navy on Cape Henlopen, Lewes, Delaware: 1896-1996) is not quite that of Ian Fleming, but educational and entertaining nonetheless. For example, as a naval attaché, he just happened to be standing by the gate of a Leningrad shipyard when a truck departed with scrap metal. When Kime retrieved a piece that fell off the truck and had it sent back for analysis, it was discovered he had picked up titanium – the material that was being incorporated into the hull of a next generation Soviet submarine.

With the submarine force having gone nuclear upon Kime’s return from his first stint in Moscow, he forged a career path that exists today with the foreign area officer (FAO) program. Whereas joint duty was considered career ending in the pre-Goldwater-Nichols era, Kime made substantial contributions at National Defense University and helped broaden international aspects of the curriculum. At NDU, he worked for Vice Admiral Duke Bayne, the former Commander, Middle East Force (Vice Admiral Bayne is the subject of an NHF oral history). At the Defense Intelligence Agency, he argued for a more restrained assessment of Soviet naval capability.

His second tour to Moscow as a naval attaché opened with the shootdown of KAL 007 followed by a succession of leaders after the death of Brezhnev. Discussions of various duties, such as an agreement that allowed him to enter and leave the Soviet Union from several seaports and flying around on what his children dubbed “Aeroflop,” made for entertaining reading.

Kime followed his promotion to Captain with a grinding tour in the Navy’s Pol-Mil directorate in the Pentagon. He was set to retire afterwards, but was offered the job as academic director at the U.S. Naval Academy – the first non-graduate to hold the post. Several of his insights are thought provoking, such as the emphasis on STEM courses over the “Bull” liberal art requirements. Finally retiring in 1989, Kime continued to serve the nation as the president of the Servicemembers Opportunity College that has been in existence since 1972 as a partnership between the military and civilian academic institutions. There he built on the success of his predecessors.

The final pages of the book focus on America’s return to the greatness that he recalled with Reagan’s “Shining City on a Hill.” Needless to say, Kime, like many Americans, is frustrated with the divisive partisan politics to the point where he foresees open rebellion. Unfortunately, this is the one area in the text where he comes up empty with regards to a solution.

Dr. Winkler is a historian with the Naval Historical Foundation.