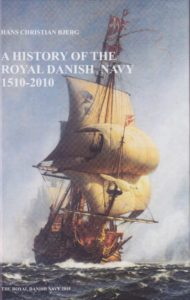 Hans Christian Berg’s A History of the Royal Danish Navy 1510-2010 offers a brief yet comprehensive account of the Royal Danish Navy’s rich heritage in a new English language translation. The Royal Danish Navy, as it was formally established in 1510, is one of the world’s oldest navies. While a shadow of the force once dominating the Baltic and North Seas exists today, it still commands the passage out of the Baltic. Relatively little is known about it in English-speaking nations, often limited to knowing it as Nelson’s opponent in 1801 or through Danish assistance of the nascent United States Navy in struggles with the Barbary Pirates.

The book begins prior to the creation of the Danish navy, opening in the Viking era of the late tenth century and following naval events involving Denmark through the end of the fifteenth century. This includes a discussion of Denmark’s struggles against the Hansa. The book next explores the era of wood and sails, running from the establishment of the permanent Royal Danish Navy in 1510 through Denmark’s war with Germany in 1864. The players with whom Denmark fought changed over those years. Denmark’s first serious naval rival proved to be Lübeck. Denmark, alongside Sweden, eventually defeated Lübeck in a quarter-century long struggle for dominance of the Baltic.

Over the next 200 years, the book shows Denmark locked in wars with Sweden for control of the Baltic. This period saw the appearance of the Dannebrog, the white cross on a swallow-tailed field of red still used as Denmark’s naval ensign. Although the Royal Danish Navy had ups and downs during these centuries, the book makes it apparent this was the apogee of Danish naval power. Denmark projected power against the Barbary States and established American colonies during the late seventeenth and early eighteenth century.

The book also traces the decline of Danish naval power. Russia’s emergence as a naval power around 1700 upset the balance in the Baltic, creating a three-cornered struggle between Denmark, Sweden, and Russia. The struggle for mastery between Britain and France also spilled into the Baltic after the 1770s. Following Napoleon’s seizure of power, the Royal Danish Navy was ground between the millstones of the Royal Navy and the French Army. Denmark emerged from the Napoleonic Wars with its fleet destroyed and shorn of Norway.

Bjerg’s story from 1815 through the present is a story of Denmark attempting to maintain independence from the growing German state. Germany was a geographic concept prior to the nineteenth century rather than a nation. Through 1900 (and even through World War II) it was not certain Denmark would not be swallowed by the German nation that Prussia built. Neutralizing that threat led to a smaller Danish Navy.