The Naval Historical Foundation recently donated a painting to the Navy Art Gallery by celebrated marine artist Bernard F. Gribble. The small watercolor painting (10.5in x 16in) appears to be an early study of The Return of the Mayflower, one of Gribble’s most notable works. Before NHF acquired the piece for donation, the watercolor was in the possession of Bill Whiteley of Parkstone, Dorset, UK.

Although there are many different versions of Gribble’s Return of the Mayflower circulating around the country, the painting’s central concept is similar in each subsequent study. The Return of the Mayflower depicts the first division of U.S. Navy destroyers on their approach to Queenstown, Ireland, on 4 May 1917. Leading the line of destroyers of Division 8, Destroyer Force, is USS Wadsworth (DD 60), flagship of Commander Joseph K. Taussig. The other destroyers of the Division include USS Porter (DD 59), USS Davis (DD 65), USS Conyngham (DD 58), USS McDougal (DD 54), and USS Wainwright (DD 62). Alongside Wadsworth, Division 8 had several encounters with German U-Boats as they patrolled the southern approach to the Irish Sea in the summer months of 1917.

Artist Bernard F. Gribble quickly rose in the ranks of the art world in the late 19th/early 20th centuries, following in the footsteps of 19th century seascape artist Henry Moore. His paintings personified the spirit of Winslow Homer with the meticulous detail of an architect. Gribble often studied photographs and ship schematics in order to give them the highest level of detail. His art was so revered by the public and prominent figures that future president Franklin Delano Roosevelt commissioned a smaller version of the painting while he served as Assistant Secretary of the Navy in 1919. Some sources indicate that the painting’s title was suggested by Roosevelt. The same painting hung in the Oval Office when he became President of the United States in 1933. Other political figures and luminaries reported to own Gribble’s work include Queen Mary and Jackie Onassis (President John F. Kennedy was an avid collector of maritime art).

Various versions of The Return of the Mayflower

The most famous version of the painting, currently in the collection of the Naval Academy Museum in Annapolis, MD, shows USS Wadsworth, Porter, and Davis steaming ahead as a group of fisherman aboard a small boat wave with jubilant glee. The moment is intensely emotional and uplifting. In the wake of a disastrous string of U-boat raids off the English coast, the approaching vessels signal rebirth and ethereal light amidst the darkness of European isolation. Gribble used the same light/dark contrast made famous by John Gast’s 1872 painting American Progress. In a blog post explaining the painting, Hampton Roads Naval Museum educator Diana Gordon expertly describes the pregnant moment:

“[Gribble] used darker tones to create a dramatic feeling while filling the canvas with a setting full of crashing waves and eerie clouds. He strategically placed a local British fisherman’s boat on the left side, full of darker shadows, expressing Britain’s despair and turmoil over the war. The fisherman’s boat fills the left side of the canvas, leading the viewer’s eye toward the center, where a United States destroyer steams straight ahead.” 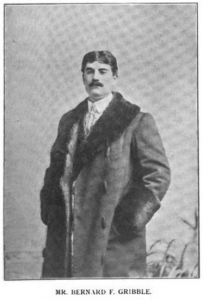 Gribble’s portrayal of the Destroyer Division is equally important for naval historians. The Return of the Mayflower (and its subsequent studies/versions) provide an accurate depiction of the United States Navy’s pre-“flush deck” destroyers produced at the end of the First World War. Four of the six ships of the Division were Tucker-class destroyers, all of which were made before the U.S. entered into the war. USS Davis was a Sampson class destroyer and USS Wadsworth was O’Brien-class, which was succeeded by the six Tucker-class “1,000 tonners.” Gribble’s stark realism and attention to detail inspired more than one maritime artist or painter, notably Paul Wright’s recent Nicholas, Taylor and O’Bannon lead battleships Missouri and Iowa into Tokyo Bay, 29 August 1945.

Many of the familiar aspects of Gribble’s famed painting are included in the watercolor: vessel moving forward, fishing boat, etc. New aspects unseen in other versions are also present, such as the coastline and a second fishing boat. Unlike some of the other paintings, there is no light and dark contrast. This would suggest that this particular watercolor is an early study. A similar study was recently acquired by the Hampton Roads Naval Museum in Norfolk, VA. The museum also has a large version of The Return of the Mayflower in the World War I section of their gallery, as well as an early artist’s study in their collection.

With the centennial of the First World War upon is, it is likely that Gribble’s many versions of The Return of the Mayflower will receive newfound worldwide attention.

Gribble’s famous painting has another connection to the Naval Historical Foundation. A short story about the origin of our Foundation’s motto appeared in a 1980 pamphlet published by NHF titled “Bayly’s Navy,” by Vice Admiral Walter S. Delaney.

Its introduction is reproduced below. You can find the full text online, courtesy of the Naval History and Heritage Command:

The 1967 Spring Report of the Naval Historical Foundation—50 years after the arrival of the first U.S. destroyers at Queenstown, Ireland, in World War I—presented a short story of the close and harmonious relationship that prevailed between the personnel in the ships of the U.S. and British navies serving together under British Vice Admiral Sir Lewis Bayly, KCB, KCMG, CVO. They did so within the mutually accepted meaning of the slogan “PULL TOGETHER,” which was displayed on a signal board secured to the inboard bulkhead abreast the starboard main deck gangway landing of the tender USS Melville, moored in Queenstown Harbor. The board was placed there at the suggestion of Sir Lewis and with the complete concurrence of Captain J. R. P. Pringle.

That this respect and affection, which started in Queenstown among so many officers of the two navies dedicated to the same objective, and would extend through practically their entire later naval service lives, is a tribute to the significance which the seagoing navies attached to the words “PULL TOGETHER.” It expressed the basic human relations element of a command structure.

It seems appropriate and opportune that this pamphlet should be a follow through on that 1967 Report. It is intended to emphasize how today, as in 1917, these words can be applied to tasks of several bodies directed towards a common objective. Where that objective is the portrayal of the history of the U.S. Navy and its role in the security of the country, the understanding and application of the words are significant.

Our members have also favorably endorsed the choice of “PULL TOGETHER” as the title of our newsletter.