Everybody is getting involved in all things Star Wars. The Internet is filled with fan theory videos, long form articles, and memes about the film. Even the U.S. Navy is getting involved in the fun. Crewmembers of USS Dwight D. Eisenhower released a video on 18 November parodying the now infamous Star Wars: The Force Awakens trailer. The crew cleverly used various aspects of carrier operations and Navy life to recreate a shot-by-shot remake of the trailer. The “Sea Wars” video is now sitting at over 1.2 million views since it was posted to YouTube.

Finding parallels between the Navy and Star Wars is not a new concept. One could devote an entire monograph to the links between the films and the ships/organization of the United States Navy. We all know that BB-8 was originally not a droid, but USS Alabama (BB 8), even though a Google search for “BB-8” will tell you something different nowadays. For the sake of time, we will not go down that rabbit hole today. One image in particular always seems to pop up on the Internet. 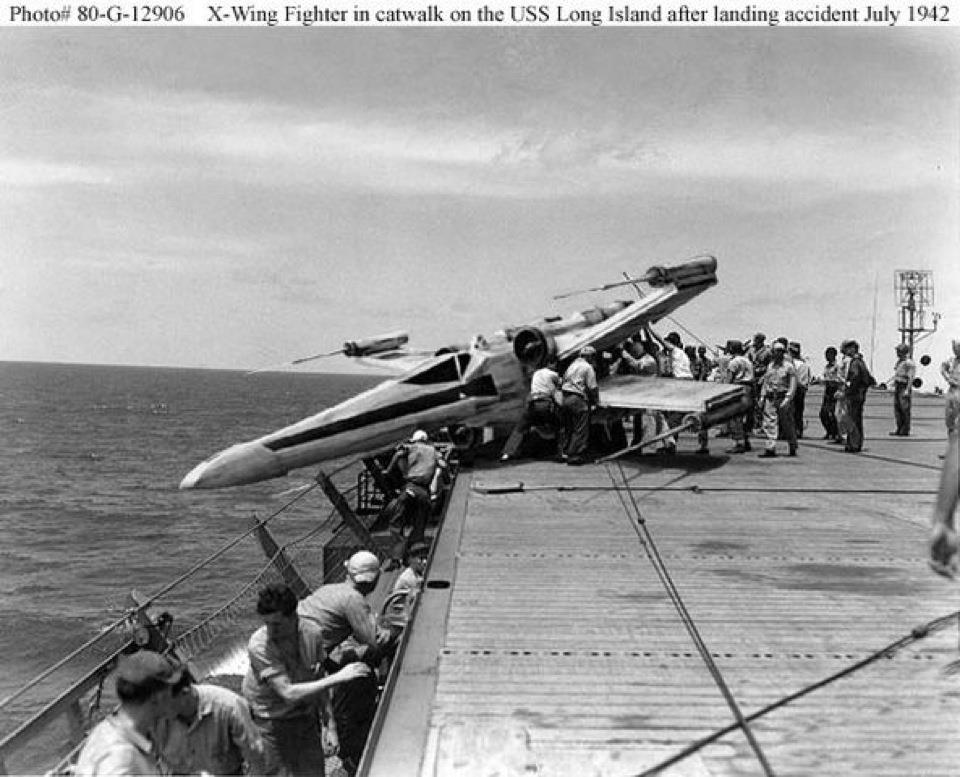 The (obviously) Photoshopped image shows an X-Wing on the catwalk of USS Long Island after a “landing incident” in 1942. I know the Star Wars universe existed in a galaxy long ago, but only 73 years ago? The humorous image has been shared on websites like Pinterest, Aviation Humor, Flickr, and Reddit. I wanted to find out how this image came about. Like any self-respecting Star Wars fan, I love a good origin story. As I did with the Cap’n Crunch story, I dug deep into the bowels of the Internet to discover this image’s origin, hoping to find out a little more about naval history along the way.

Clearly, this image had to have an original that was recreated and repurposed through Photoshop. Thankfully, the image left a trail of crumbs any naval historian would recognize: the infamous Naval History and Heritage Command “cutline” at the top of the image. These cutlines were created by former NHHC (then Naval Historical Center) Photo Archivist Chuck Haberlein in the late 1990s as a way to easily identify images included on their website. Although they are merely informational, these cutlines themselves are a distinct marker to identify a photo within the U.S. Navy’s collection. The Star Wars image left the cutline unaltered. Using the NH number on the image, I was able to find the original image on the Naval History and Heritage Command’s website. The Photo Archivists at NHHC work like Jedi Masters to include high resolution photos of the Navy’s photo collection on their website. 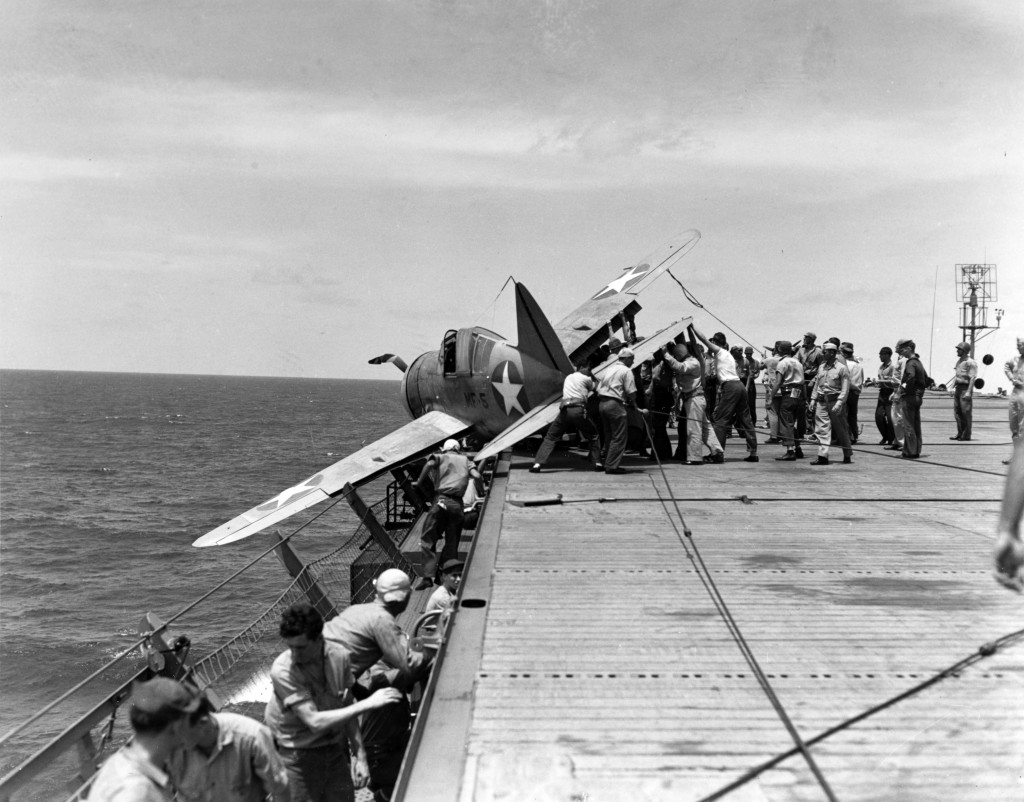 The original photo of the Brewster Buffalo incident also appears on the NavSource website page dedicated to images from the Escort Carrier USS Long Island (CVE 1). Interestingly enough, they also show the image from a different angle. 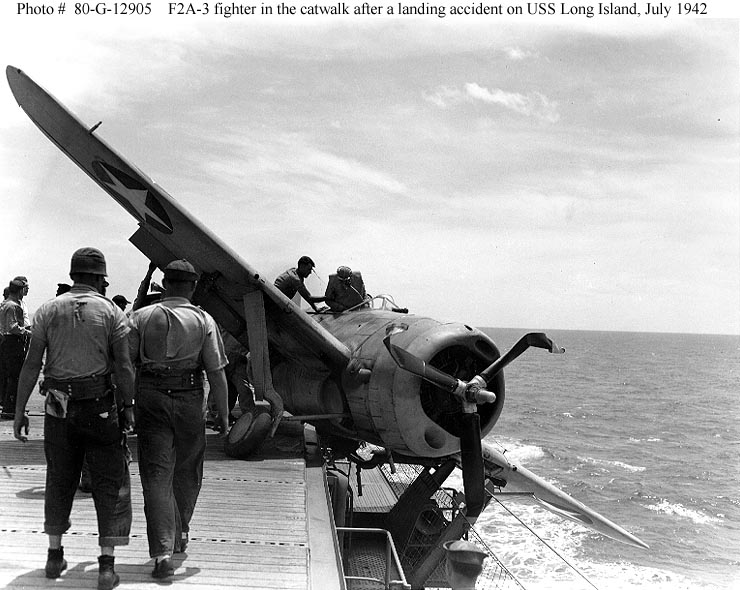 So where did the doctored image of the X-Wing come from? Using a reverse image search yielded some interesting results. Where did it all begin?

Scrolling through the reverse image search database and the Internet Archive (Wayback Machine), I was able to pinpiont what I believe to be the first use of this image. If we lend any credibility to Internet search engines, then the original X-Wing image aboard USS Long Island came from a Science Fiction blog called “Trekster.” Here is a screenshot of the image, posted to trekster.net on 7 June 2006 with the tagline “Who Invented the X-Wing:” 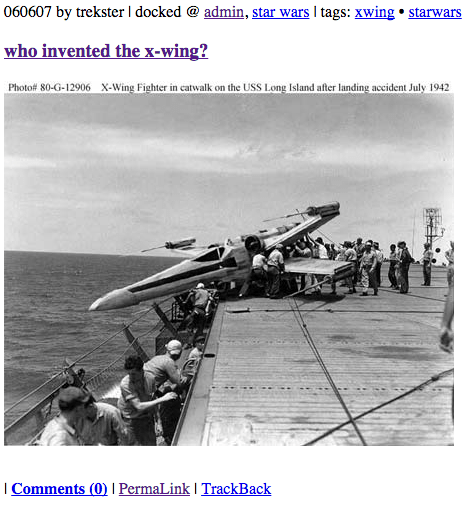 It is unclear whether the admin for the Trekster website created the image or not. Unfortunately, the image begins to appear on the Internet ONLY after the 7 June date. The image itself was reposted on several websites, most notably the (now) popular German website Nerdcore. Or so I thought. Like Luke’s reaction to the dark side, I wasn’t going to give in so easily.

I was unconvinced that the 7 June post date was the earliest the world saw this image. I was right. Taking the idea that several German websites reposted the image, I shifted my focus and searched for the image and it’s correlation to German language pages. I found a website on Photoshop manipulations that included the image in it predated the Trekster site by one week.

The caption to the site reads: “I’m a big Star Wars fan, so this is a must: The “origin” of the X-Wing.”

Is this the first time this image appeared on the Internet? Possibly. Clearly, the author grabbed this image from somewhere to include it on a post about Photoshop manipulations. Unfortunately, I could not hunt down the original author of the image. No spoilers to ruin here. Maybe the best things should remain a mystery. In the meantime, there are plenty of new images on the Internet out there that keep the spirit of the USS Long Island image alive, like this recent one of ANOTHER X-Wing on a carrier (this time, it’s an image taken from USS Harry S. Truman back in 2008). 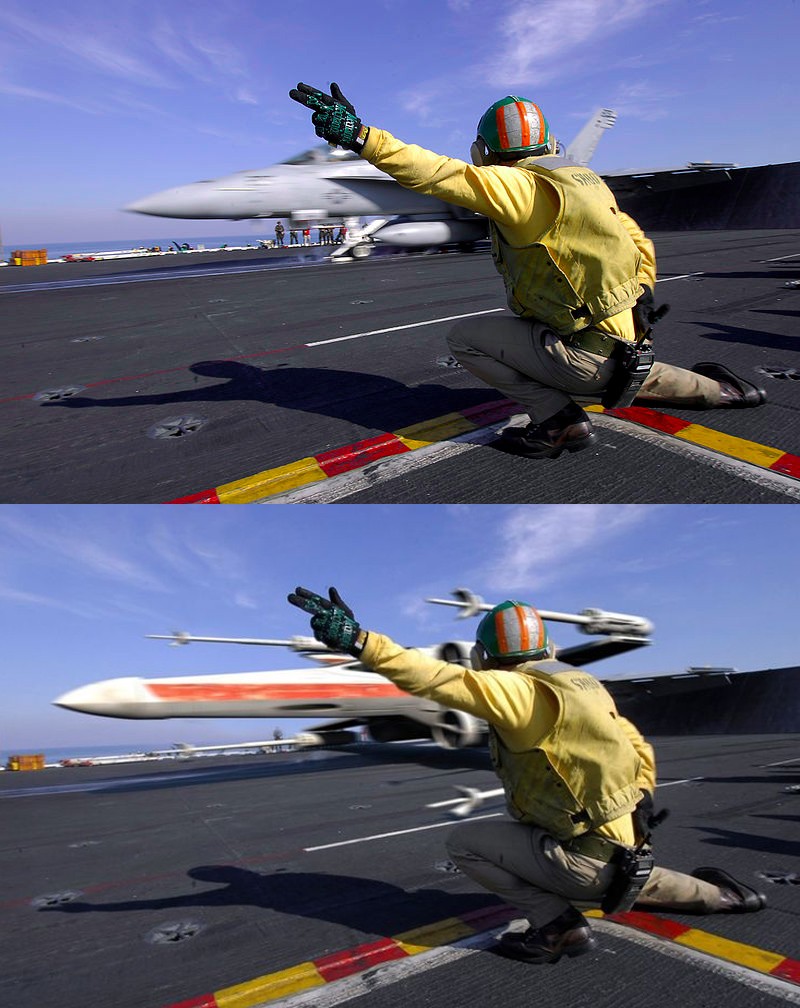