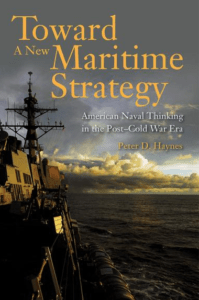 Captain Peter Haynes’ study on maritime strategy builds a narrative around two questions. First, how did the United States Navy come to publish “A Cooperative Maritime Strategy for the 21st Century” (CS-21): and, more importantly, why did it take so long? Along the way he uncovers a lot of fascinating institutional history about the Navy’s strategy making processes, or lack of them, from the end of World War II to the present. This book is the ideal answer to a question currently raging in the U.S. Navy about a so-called “strategic holiday.” [1. John T. Kuehn-“Now Here This…What Navy Holiday?” in Naval Institute Proceedings (May 2014), 16.] However, it does not let the Navy off the hook, the Navy is thinking strategically again, but ultimately, in the final chapter of the book, he finds that “Culturally…not much has changed since the end of the Cold War.” (252) For most of the book Haynes seems to agree that as an institution the Navy has tended relegate—or ignore—strategy and strategic planning to other institutions and processes outside the Navy Department and might be in danger of doing so again. The book is thus both history and polemic.

Haynes wastes no time in introducing the reader to his topic in the opening pages of his introduction. He starts with the end first, the “Cooperative Strategy for 21st Century Seapower” published by the US Navy in 2007 and also known among naval and strategy circles as CS-21. [1. For example see Sebastian Bruns, “The “Cooperative Strategy” (CS-21/CS-21R): A View from Germany,” at
cimsec.org/cooperative-strategy-cs-21cs-21r-view-germany/16240 (accesed 09/01/2015).] Haynes very much takes the institutional approach toward his topic throughout his survey of naval strategic thinking since the end of World War II. Haynes combines social science and historical methods by looking at the interactions and dynamics of organizations and sub-organizations as well as individuals within institutions. Key to this approach are definitions centered on “rules” and “players.” According Thomas Hone and others, institutions are “society’s rules of the game”: Institutions establish a stable and predictable pattern to human interaction. The term institution therefore includes formal contracts between individuals, informal codes of conduct, conventions…regulations, laws, charters and constitutions.

Likewise, the “players in the game” include individuals and organizations. Organizations are “A group of individuals who follow particular, often formal, rules in their dealings with one another and outsiders.” This reflects very much the approach that Haynes takes here. [1. Friedman, Mandeles, and Hone, American and British Aircraft Carrier Development, 5-6. These authors cite Nobel Laureate Douglass C. North, Institutions, Institutional Change, and Economic Performance (New York, 1993.) More recently, Mandeles acknowledges the role of Jean de Bloch’s pioneering analyses in The Future of War: Organizations as Weapons (Washington, DC, 2005) as contributing to his inspiration for the “levels of analysis” approach.] The institutional approach serves him well, especially since, as a member of the institution he is examining, he is acutely sensitive to its longstanding biases and a keen student of it cultural tendencies. In other words, this author, also an “inside observer” of the institution, read many of the same sorts of observations his own 23 year career reflected that Haynes does in this book. However, one of Haynes major arguments about the Navy is just this very lack of awareness, of self-reflection, by its would-be strategic leaders. He quotes Colin Gray on the larger problem that, “Despite a glittering record of strategic accomplishment in the twentieth century, sea power has not attracted the balanced appreciation it deserves.”(251) Haynes suggests this appreciation, or lack thereof, has resided as much inside the Navy as outside.

Haynes closes the book, as a good naval officer should, with clear recommendations for a way ahead in the light of the revision that occurred to CS-21 in 2015, often referred to as CS-21R (for revised). (247) He clearly believes that the Navy is in danger of falling back into more comfortable ways of doing business– programmatics and an overwhelming operational focus– which could negatively impact the positive strides represented by the publication of CS21. “Navy officers…assumed leadership positions devoid of anything but operational and programmatic experience and the technical-technological expertise, none of which required a deep understanding of the Navy’s purpose.” (245) To that end, Haynes recommends establishing institutional solutions to solve what he sees as institutional problems: a maritime research institute, a strategic analysis course at Naval Postgraduate School, and maritime research chairs at major Professional Military Education institutions and even civilian universities. (251)

Between this very present minded-focus on the health of the Navy and the book’s introduction, there is some very fine institutional and organizational history. The bulk of the book focuses on the period after the Cold War, after 1990. This is a bit odd, since Haynes believes the “shadow of the Cold War” still hangs over how strategy is formulated at all levels within the U.S. government. (242) Nonetheless, his treatment of the role of personality in the post-Cold War naval leadership is masterful. If any heroes emerge in this story they are Vice-Admiral John Morgan and, surprisingly, Admiral Mike Mullen when he was the Chief of Naval Operations (CNO). They, at least by Haynes’ account, seem to have produced a very unlikely maritime strategic product during a very unlikely period that encompassed two major land wars. The book is also, in passing, an excellent primer on all of the late Cold War and post-Cold War Chiefs of Naval Operation. Also, it clearly advances the very large idea, broached again by Thomas Hone in the Naval Institute’s December issue of Proceedings, of the U.S. Navy as a guarantor of the world’s globalized system. “The strategy [CS-21] had not become cooperative because the United States wished the world well, but because Washington required cooperation with allies and security and economic partners in order to achieve U.S. interests, which included maintaining American leadership of its system.” (235) In short, the globalized system needs tending and the maritime component of that system’s biggest sponsor, the U.S., is best tended by the “one institution on earth” that currently can do such a broad ranging task—the U.S. Navy. (252)

As the final chapters illustrate, the 2007 maritime was a supremely consensus driven document. On the one hand had to balance the importance of soft power to the strategy, while at the same time addressing the traditionalists’ ongoing concern about how the strategy rationalized the use of hard, military power as reflected in what Haynes calls the “balancing” of the fleet. (236-237) It managed to do both while retaining its overarching “big idea” of maritime power, as wielded by the United States, as a key to underwriting (peacefully or otherwise) the stability of the global system. Haynes also includes a useful section on the reception of CS-21 after it promulgation and a discussion of its critics as part of his conclusions chapter.

For those readers, and they should include as many folks as possible in government and security circles, who have wondered about whether the Navy has a “strategy problem” or not, a topic of much recent debate, this book will address their curiosity. It also has much to offer those with broad interest in how institutions change, see themselves, and try to reconcile their institutional identities within the context of a national strategy, or even grand strategy—especially those interested in how the United States fits into the overall picture of the global system and why it remains an essential leaders and “system manager.” This book is also recommended to the officers of the People’s Liberation Army Navy (PLAN), if not already on their lists—as radical and unconventional as that might sound coming from the keyboard of a former US Navy officer. Knowing one’s counterparts can be as useful for advancing peace and understanding as it is in “knowing one’s enemy” for the darker purposes of war.

Dr. Kuehn is a former naval aviator, retiring as a Commander from the U.S. Navy in 2004. He is currently the Major General William Stofft professor at the U.S. Army Command and General Staff College. Kuehn was awarded the Society of Military History Moncado Prize in 2010 and is the author of Agents of Innovation (2008) Eyewitness Pacific Theater (2008) with D.M. Giangreco, A Military History of Japan (2014), and Napoleonic Warfare (2015) as well as numerous other articles, chapters, and editorials.