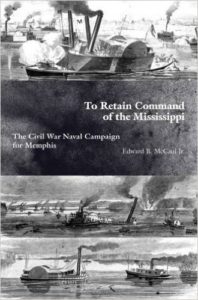 By Edward B. McCaul, The University of Tennessee Press, Knoxville, TN (2014)

Seldom has a naval campaign been more critical to the future of the United States than the drive to control the Mississippi River and split the South in two during the Civil War. Along with the naval blockade, it formed part of Gen. Winfield Scott’s grand strategy “The Anaconda Plan” to strangle the South. It produced solid progress towards ultimate victory and the Union’s winning general, Grant, while Lee outmaneuvered his Union counterparts in the east for two years. But it is especially interesting from the viewpoint of the history of the US Navy, whose small blue-water force had to adapt to the shallow passages and intricate currents of inland waterways, and the riverboat men and pilots who used them. It had to adapt as well to the tactics, organization, and politics of the US Army, and the complex chains of divided command that sprouted up on the way to the many combined operations victories that reduced the Southern strong points barring the river, from Island No.10 to Vicksburg.

Indeed, it is all too easy to see this Union success as inevitable, the result of superior military strength, plus naval and industrial resources that the South lacked. But would it have been possible for the South to defeat this effort? Dr. Edward B. McCaul says yes – the potential was there, and the South made a manful and intelligent effort to seize it and turn the tide of invasion by assembling its own River Defense Fleet to directly challenge the Union’s Western Flotilla. The key to the Union force were the eight “City-class gunboats,” “Eads boats,” or “Pook turtles,” named after their builder and designer, respectively. They were the Navy’s first ironclads, and among its hardest-fighting and most successful ships. McCaul argues strongly that Joseph Montgomery, creator and commander of the Southern River Defense Fleet, developed ships and tactics to exploit the weaknesses of the Union armored gunboats. Indeed, he “gave the Confederacy its greatest naval victory, and if he had been better supported and luckier, could have delayed the capture of Vicksburg until at least 1864, which could have changed the outcome of the war.”

The window of opportunity for doing so was centered on April- June 1862 and the naval battles of Plum Point and Memphis, which McCaul has meticulously researched, and describes with a superb combination of clarity, vividness, and tactical analysis. McCaul is clearly a man of many talents – college dean, professor of Engineering, with a Ph.D. in History. He steers us masterfully through the shoals of the river, nineteenth-century technology, and the human relationships of the stormy leaders of the Civil War era, such as Montgomery, Foote, Davis, and Ellet.

The armored gunboats were the Union’s greatest asset, powerfully effective against enemy forts and ships. But their low speed – barely enough to go upstream against the current – was a critical deficiency. They could pass Confederate forts quickly and safely going downstream, getting back above them was a very dangerous procedure; it meant a long period of exposure to close-range enemy gunfire. Also, it made it impossible for them to pursue an enemy gunboat which managed to pass THEM, and get upstream above them. Capt. Joseph Montgomery (the river pilot who taught Mark Twain his craft) organized and led an asymmetrical force of fast, maneuverable river steamers, lightly armed and protected, but with bows strongly reinforced to act as rams. He hoped to fight the Union ironclads, sink them, or at least bypass them and seize control of the river upstream, threatening Union river ports and shipping with impunity.

On May 10, 1862, Montgomery seized the initiative and aggressively attacked the Union gunboats supporting the bombardment of Fort Pillow at Plum Point, Tenn., successfully ramming and sinking the Cincinnati and Mound City and withdrawing with little damage. Perhaps nothing like this sharp but decisive melee between self-propelled and maneuverable craft had occurred since the days of rowed galleys, and it proved the effectiveness of the ram – at least on the river. The ascendancy of armor over the gun for the next few decades left the ram as the quickest way of actually sinking an enemy ship outright, by breaching the watertight integrity of its hull. Their lesser maneuverability made it difficult to employ by sea-going ships, but it did claim the Re d’Italia at Lissa, and a number of other ironclads in peacetime collisions! Still, as McCaul says, Plum Point was the Confederacy’s greatest naval victory, and opened the possibility of a disastrous loss of Union control of the River.

What saved the day for the Union was the appearance of its own force of fast converted rams, conceived and commanded by another brilliant but highly individualistic and volatile amateur, the gifted and famous civil engineer Col. Charles Ellet Jr. His “Ram Fleet” was under his independent command, reporting directly to Secretary of War Stanton, with no clear chain of command with the Navy’s Western Flotilla. Thus relations between Ellet and the new Navy commander Commodore Charles H. Davis were initially extremely uncomfortable, to say the least. Meanwhile, after the fall of Fort Pillow, the Confederate force fell back on Memphis, where it was immobilized for lack of coal, preventing it from retreating further downstream to safety under the guns of Vicksburg.

On June 6, Davis attacked him there with his five armored gunboats, in full view of a crowd of perhaps 15,000 Memphis citizens. His boats were deployed in a line abreast formation spanning the river. Unable to steer well with the current behind them, they were proceeding downriver stern first, maintaining their tight formation and letting the current carry them downstream onto Memphis and the Confederate fleet. This time, Montgomery hesitated to ram, in the face of Davis’s close formation and heavy gunfire. Meanwhile Davis was hoping for Ellet’s support though they had made no plans for coordinated action. But Ellet was already headed downstream, and when he saw Davis’ force was in action, he charged through its line to launch a slashing ram attack on the Confederates – like Phormio at Naupactis! “When the Queen of the West rammed the Lovell just forward of its wheelhouse the impact was tremendous. Although both boats were damaged the Lovell’ was almost cut in half…only five out of 80 men survived the sheer speed at which the boat sank.” You’ll need to read McCaul’s account to capture the full drama, surprise, and shock of this brief, confused, and savage action. Fortuitously perhaps, but the ironclads and rams played their proper roles in perfect synchrony, as Ellet’s ram attack threw the Confederates into complete chaos, under the supporting gunfire of the ironclads. Montgomery’s fleet was wiped out as a threat, with only two out of seven boats escaping downriver.

This book is a small masterpiece of exhaustive research, strategic and tactical analysis, and clear and vivid description. It contains complete (if small) maps, diagrams of the battles, brief descriptions of each of the ships involved, and capsule biographies of Davis, Ellet, and Montgomery, as well as extensive notes and bibliography. In its focus on these two battles, it gives a definitive treatment of a very significant but neglected topic. But McCaul’s perceptive mastery of his background material makes this book required reading for anyone interested in the Civil War campaign on the Mississippi. This writer could claim to be reasonably familiar with the subject – I went to Vicksburg four years ago to see the battlefield, the River, and the salvaged remains of the last of the Eads boats, the USS Cairo – but this book left me with the sense that I hardly understood the conditions of warfare on the River, and its tactics, strategy, and significance, until reading it.  Indeed, this is must reading for anyone interested in the US Navy in the Civil War, the campaign in the West, and riverine warfare in general: A gem of a book.

Robert P. Largess is the author of USS Albacore; Forerunner of the Future” and articles on the USS Triton, SS United States, and the history of Lighter-Than-Air.