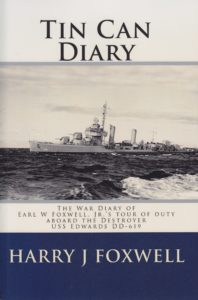 The destroyer is a light, fast, maneuverable, and heavily armed class of warship originally designed in the late 1800s to “destroy” torpedo boats. By World War II, these ships were designed and used to escort much larger ships and convoys filling the role of anti-aircraft and anti-submarine protection. The nickname was dubbed by the sailors who sailed them because of the thin skin and relative light displacement allowing them to bob around the ocean like a tin can. The “haze gray” color, sleek hull design, and speed also afforded them the less sarcastic nickname of “greyhounds of the sea.”  The well decorated USS ­Edwards (DD 619) is a member of the Gleaves Class of destroyer; the online Naval History and Heritage Command (NHHC) records mistakenly list it as a Benson Class. Similar in most respects to the Benson class, the Edwards specs meets the minutely heavier displacement and faster Gleaves class. The ship specifications listed on the NHHC website are correct for the Gleaves Class; “Benson” appears to be a misprint on the website (also the Benson class hull numbers ended at DD 617, DD 618 being the Davidson of the Gleaves Class). Good catch, Harry. She spent most of her time during WWII as an escort/screening ship and it appears a pretty good one with some bombardment duties thrown in for good measure. She also gained quite a reputation in the rescue business as well.

The Tin Can Sailor whose experiences are the basis of this yarn is Fire Controlman Third Class Earl Washington Foxwell, Jr. Born in Cape Charles, VA, on July 20, 1926, Foxwell enlisted in the Navy nine days after his sixteenth birthday and ten days after Edwards was launched. On July 29, 1942, he enlisted in the Navy with his mother in tow. As was common in those days, he “misled” navy recruiters about his age by listing his birth year as 1926. On September 19, 1942, the day it was commissioned, the newly trained Seaman Foxwell boarded DD 619 for his soon to be exciting tour of duty and recorded his first diary entry. The diary was not so much about him as an individual but, of Edwards and its actions and duties.

Foxwell and Edwards had a rough couple of beginning months together. Their duties began with sea trials on October 2, 1942. They rammed a British tanker on her first day out and had to return to dry dock for repairs. A short time later, Foxwell was sent to gunner’s school and stopped home and over stayed his leave by two days, missed the ship and was declared a straggler. Upon his return, he received a few “mast” penalties. This part of the book has a few holes in the chronology but picks up on the pass through the Panama Canal on December 11, 1942. Together, Edwards took part in the battles for Guadalcanal, the Aleutians, Bougainville, Rabaul, the Gilberts (Tarawa), Marshalls, Palau, Wotje, Eniwetok, Tinian, and the retaking of the Philippines. Four days after the Japanese surrendered on September 2, 1945, Foxwell was released from duty, returned home, got a job as a machinist, and started a family.

The easy to follow format chronologically lists events from the original diary recorded by the author’s grandfather. The author intermingled official facts and Navy lore throughout, keeping the drone of a typical personal diary interesting and relevant to the ship’s story. I enjoyed the read; less than a hundred pages, many interesting relevant tidbits and a few relevant photographs for good measure. A nice mix of official and personal perspective on the life of a little known yet, great ship.

Mr. Solecki is an independent naval historian, holds a Master of Arts in Military History degree from Norwich University and is a veteran of the U.S. Navy and NOAA where he acquired, processed and disseminated environmental intelligence for the consequence management of Weapons of Mass Destruction, Anti-Submarine and Anti-Aircraft Warfare. He is currently an enforcement officer for U.S. Government and he performs technical peer reviews for several publishers of U.S. and Japanese naval history.