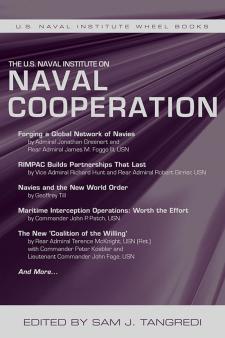 As part of the U.S. Naval Institute’s wheel book series, this book offers a selection of papers on the subject of international naval cooperation that seeks to provide a handy source for naval officers and readers interested in naval affairs and the possibility of cooperation between the U.S. Navy and other navies around the world. Various aspects are discussed, ranging from ad hoc partnerships put into place to protect the rules of the road, to deeper alliances to confront piracy and provide disaster relief.  Unlike some of the previously published books in this series, there are no selections from books. Rather, all eighteen of the papers included in the slightly under 200 pages of main material are from the U.S. Naval Institute’s Proceedings

Despite having the papers come from the same source, they show great variety.  The papers demonstrate a wide degree of scope in what defines the topic of international cooperation.  As the editor helpfully explains and concedes, “there is no official Department of Defense definition, but international naval cooperation describes a virtual myriad of programs and activities for one overarching goal: to enhance the interoperability of U.S. naval forces with foreign navies and militaries to achieve mutual strategic objectives (2).”  The rest of the book, which contains papers on topics divided into six sections:  1. alliances, coalitions, and partners; 2. international programs, visits, and exercises; 3. international law and diplomacy; 4. maritime security; 5. humanitarian assistance and disaster relief; and 6. encounters at sea. These demonstrate the broad scope of the author’s conception of naval cooperation.

Within this broad scope, there are many areas of interest to many naval officers as well as a still wider audience of those interested in naval affairs.  On the one side, some authors write about naval cooperation arguing the need for naval officers to be aware of and sensitive to international law and treaty. This is poignant, given the conflicts over the UN Convention on the Law of the Sea, (which has never been ratified by the United States despite its voluntary adherence to most of its provisions), as well as the way in which the successful avoidance of or dealing with international incidents with potentially hostile navies, such as Russia and China. Other authors, including several officers from foreign navies, write about the importance of preserving NATO strength and also building up the naval infrastructure of African navies to combat piracy. They point out naval cooperation involves paying attention both to formal alliances as well as the wide variety of mutual strategic interests that bind nations together who may not otherwise find themselves as allies. One of the authors, Rear Admiral Terrence McKnight (author of the excellent Pirate Alley: Commanding Task Force 151 Off Somalia), has an insightful comment on international cooperation against piracy: “If one’s enemies happen to be pirates, then every state is your friend.  It doesn’t matter what region of the world you are from or what religion you practice, no one sides with pirates.  India, China, and the United States, along with many others including some of our very closest allies, are in the Gulf of Aden right now engaged in the very same fight against piracy (166).”

These and other essays suggest reasons why it is important for navy officers and lay readers interested in naval matters will find this work of value, despite the fact that many essays contain an excessive number of hard to read acronyms related to the bureaucracy of the United States Navy. Although the editor includes a helpful suggestion for further reading at the end of this book, a glossary of terms would be helpful, as not all of the authors ever actually completely define the various abbreviations they use for matters of naval arcana. The editing could have been a bit more robust to help some of the papers use the proper (usually past) tense and include some words that appear to have been left out and never corrected. Copy editing needed would fix a handful of minor grammatical errors.

Among the most obvious reasons why the book is worthwhile to read for a larger audience is the fact that it serves to discuss a matter often ignored in the education of naval officers, despite the fact that working with alliances and coalitions forms a major aspect of American policy and practice. Even shore leave qualifies as an opportunity for naval cooperation and building the reputation of the United States abroad through the power of one’s personal example. Likewise, the critical importance of “freedom of the seas” to the free passage of the vast majority of the world’s exports requires sound strategy, communication, cooperation, and diplomatic finesse to help build up the capabilities of nations to engage in peaceful international trade and avoid dangerous incidents that provoke conflict and endanger the economic strength of the world.

This book manages to present multiple perspectives on various controversial subjects, including the desirability and efficacy of increasing formal programs to deal with interaction between U.S. Navy personnel and the naval personnel and civilians of other nations, as well as the case for and against the ratification of the UN Convention on the Law of the Sea. Although the editor expresses his own opinions through the use of occasional wit throughout his thoughtful introductions to the essays included in this work, this book ultimately provides enough information for the reader to come to his or her own conclusions when it comes to the state of contemporary naval cooperation between the United States and other maritime nations, as well as what steps can be taken to improve trust, build bridges with others, and increase the awareness of the long-term and indirect benefits of naval cooperation that are often not given sufficient public attention.