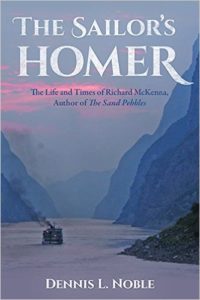 Richard McKenna was a forecastle sailor who wrote with skill. His literary career was short – two dozen short stories, a half-dozen essays, one completed novel and one novel left unfinished by death. That short published corpus made him the voice of the enlisted sailor of the twentieth century United States Navy.

McKenna was shrouded in obscurity. His background was shadowy, his heirs ephemeral, and the papers he left behind largely forgotten.  Some confuse McKenna with Jake Holman, the protagonist of McKenna’s sole novel, The Sand Pebbles.

The Sailor’s Homer: The Life and Times of Richard McKenna, Author of The Sand Pebbles, by Dennis L. Noble reveals the authentic Richard McKenna.  As the first serious biography of McKenna, it shows what a dedicated author can do with the right materials.

Noble became fascinated by McKenna after reading The Sand Pebbles. They had similar careers. Both were long-time enlisted (Noble in the Coast Guard) who wanted to write. He long dreamed of writing a biography of McKenna, but lacked the information he felt necessary for a comprehensive biography. Then Noble learned the staff of the Richard McKenna Charter High School in Mountain Home, Idaho, had McKenna’s papers, long-forgotten and believed to have been lost. These, along with McKenna’s service records, allowed Nobel to create a revealing and intimate portrait of McKenna.

The author shows how a boy from an impoverished family grew up to become an author who combined literary excellence with popular appeal. He starts with the influence that Mountain Home had on McKenna. McKenna grew up poor. His family lived in a tent after the family farm was repossessed. McKenna is shown as an inveterate reader who both lettered in sports and became student council president.

Noble follows McKenna’s career in the Depression-era Navy, including McKenna’s formative years in the Asiatic Fleet as engineman and machinist. Noble also shows McKenna developing into a chief through sheer excellence. All the time, McKenna was reading, writing and observing his surroundings. Noble reveals the perspective the era’s enlisted sailors through McKenna.

The book’s biggest surprise is how different McKenna was from the alienated and isolated Jake Holman. McKenna is revealed as a man popular among his shipmates despite an introverted personality, and as a first-rate sailor; the model of a chief petty officer.

Another surprise is the relatively prosaic nature of McKenna’s service in World War II. He served aboard Mount Vernon, a troop transport, running the refrigeration plant. Although shot at a few times, the ship was never hit, and spent most of the war shuttling soldiers. World War II is almost anticlimactic compared to his years in the Asiatic fleet.

The Sailor’s Homer is a masterful book, a first-rate biography of a complex and overlooked author. Noble shows how to write a nautical biography.