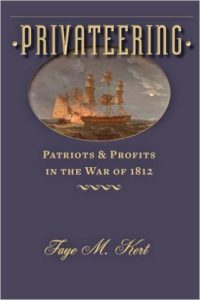 During the War of 1812, the burgeoning United States Navy was at a disadvantage when engaging Britain, the world’s most formidable sea power. One method of leveling the maritime “battlefield” was the employment of a privateer fleet. Faye Kert is an eminent Canadian maritime historian who has written extensively on the topic including Prize and Prejudice: Privateering and Naval Prize in Atlantic Canada in the War of 1812 and Trimming Yankee sails: Pirates and Privateers of New Brunswick. In Privateering: Patriots and Profits in the War of 1812, Kert writes about privateering from several new points of view. She first examines privateering as a business venture with profits and losses. She then discusses the characteristics of owners, specially designed ships, and the captains and crews that plied the oceans on quests for vulnerable prey. The book includes a great deal of tabular data about captures and dispositions of the bounty, the latter being especially difficult to find elsewhere. She finally appraises American, Canadian and, to a lesser degree, both British and European privateering efforts during the war.

According to her tables during that time period, 246 American and roughly 36 Atlantic Canadian vessels carried letters of marque, government issued licenses granted to vessels,. Only a few achieved great success chasing their quarries in places like the coast of North America, the English and Irish Seas, off Spain, Africa, South America and among the Caribbean Islands. Each was a maritime commercial venture, a unique complex business without a simply defined method, but highly dependent upon different captains and crews of differing abilities.

Not unexpectedly, most of those who dared to pursue this profession risked their lives with no guarantee of a prize. Successful privateers usually had strong leadership, a disciplined crew, a well-designed vessel, and above all, unpredictable good luck. They fought the wind, weather and potentially deadly broadsides to seize rewards that, once taken, could be easily lost to recapture or natural perils. Perhaps because of the unfavorable odds, many vessels returned to port empty-handed, while others became prizes themselves. Still, the privateer fleet functioned as an effective supplement to the American Navy and caused the British to use their warships to escort convoys of merchant vessels to their ports of call.

Privateers used many tricks such as false flags and papers, or repainted and/or re-rigged ships to deceive potential quarry. The author’s narrative makes a complex topic lucid. Her descriptions of sea battles, both won and lost, are stirring and well done. Some profited from geography. Because the border of the then-Massachusetts district of Maine and that of New Brunswick, Canada, are contiguous, many ships in the area claimed neutral Scandinavian registry and thus profited from smuggling goods into both countries. The transformation from an American to Swedish vessel occurred so fast that some said that ships could sail from Eastport to Stockholm in a matter of only a few hours. There were the so-called “Mud-clippers,” overland freight movers not unlike privateers’ prey that imitated their maritime counterparts. Some newspapers lampooned this business by publishing “Horse-Marine Ship News.”

Kert covers all aspects of privateering from forming syndicate enterprises, obtaining letters of marque, recruiting officers and crews in various ports, to ship design and strategies. In addition, she highlights the social, monetary and political impact of this quasi-warfare endeavor. Ship owners and investors spread their risk by owning shares in several privateers sailing from different ports. Their captains were cautioned to expose their vessels, crews, and cargoes to a minimum of harm in taking prizes. Avoiding extensive combat helped manage risk and investment losses. The last chapter contains detailed accounts of successful and failed Canadian and American vessels from that war and their ultimate ends.

Dr. Kert summarized the effect of privateering and the United States Navy as follows: “the widespread hardship and annoyance generated by private armed warfare may have helped promote an end to the war, but it was the British blockade that ultimately decided the [outcome].” (p.37) The war caused material losses to the American people many times greater than the American Navy and privateers inflicted upon Great Britain during the conflict.

Privateering has few flaws, but an introductory glossary of terms would have been helpful to those unfamiliar with the topic. A reader can be easily confused in this particular maritime vernacular’s morass. Privateers were both people and vessels and a rogue privateer was a pirate. Letters of marque were government documents, occasional commercial vessels and as well as privateers. “Licensed” trade vessels largely sailed with immunity from capture and cargo confiscation. Some privateer vessels were variations on well-known designs modified for advantageous speed and maneuverability, but sailed under diverse names at different times from uncommon ports. Some, such as “shaving mills” or smaller oar propelled privateers, succumbed to a special privateer’s jargon. The author clearly defines them, but in some cases these definitions appear well into the book

In summary, this is an excellent read on many levels and is unique by adding the often-neglected Canadian perspective concerning this topic. Faye Kert’s scholarly, informative and concise work is highly recommended for inclusion in any maritime historian’s library.