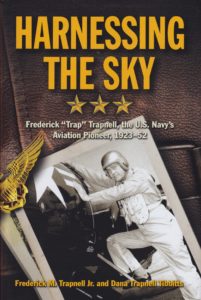 Individuals who were “present at the creation” of seminal events or organizations tend to be popular subjects for biographies, especially if their influence was of great strategic importance. When those individuals are not well-known despite their efforts, it often helps hook the reader knowing that an oversight has been corrected. The history of aviation and especially naval aviation in many ways is the history of America’s rise to a global power. A who’s who of aviation pioneers could very serve as a Venn diagram to American Technological, Military and Industrial prowess. Naval aviation adds an extra element of danger to this diagram. Naval aviators can boast to have one of the dangerous professions in the world. They can take comfort in the fact that their aircraft have been rigorously evaluated the entire way by the manufacturers and by test pilots. Frederick “Trap” Trapnell was one such pilot. In his career spent 1923 to 1953, he evaluated nearly every new naval aircraft from open-cockpit biplanes to the first generation of jets. The fact that his name is not as well-known as other aviation pioneers is unfortunate, but his son Frederick M. Trapnell Jr. and granddaughter Dana Trapnell Tibbits have set out to right this wrong with this volume.

Biographies of subjects closely tied to great historical endeavors often rely heavily on personal papers or accounts of those close to them. The authors faced an challenge in that even with a close family connection, Trap’s professional life had little paper records; and much of it was of a highly classified nature. As they recount, a single box of salvaged personal items including log books, letters a lock of red-gold baby hair, and photographs reaching back more than one hundred years helped reconstruct the life of a person who traveled light and shunned both clutter and sentimentality.

This does not mean that Trap did not interact with important figures throughout his career. Admiral Arleigh Burke was a classmate at the Naval Academy. He was always on the cutting edge of naval aviation from the Washington Naval Conference to the Cold War. Although Trap may not stand in the front of the crowd, he did certainly influence those groups.

There are seventeen chapters and an epilogue in the volume; beginning with the situation immediately preceding the Second World War, then chronologically moving from Trap’s birth in Elizabeth, New Jersey, in 1902, to his death in San Diego in 1975. The first chapter covers his early life including his matriculation at the US Naval Academy and initial service as a surface officer on the battleship USS California. (Aviation was not a commissioning designator in the 1920s) He soon became known as an officer who was not afraid to complete the same chores as his sailors; including the claustrophobic assignment cleaning and repainting the narrow space between the ships double-hull. After a year on board the battlewagon, Trap was assigned for a year to the light cruiser USS Marblehead, where he was fascinated by the two float planes carried for reconnaissance and gunnery spotting. He mingled with their crews, learning of the excitement surrounding the construction of the carriers USS Saratoga and USS Lexington. After just over a decade, naval aviation seemed to be growing in importance. Trap applied for transfer to aviation, graduating with his wings in March 1927.

He soon proved an excellent “stick and rudder” man, joining the San Diego-based “Red Rippers” after only a year. Acrobatics teams would prove to be a direct line to test piloting; but he was still officially a fighter pilot assigned to USS Lexington. An exercise in 1929 pitting Lexington against her sister Saratoga in the Panama Canal Zone illustrated that naval aircraft could have a decisive effect on military targets. They also required an ability to master all problems associated with naval and aviation affairs, especially weather. Soon after, Trap won entrance to the Caterpillar Club, referred to as such since he used a silk parachute to escape a falling airplane. While the parachute saved his life; his ability to discern when an aircraft was not operating properly was equally important. This would prove an excellent asset in his later career as a test pilot. That stage of his career would commence in December 1929. His assignment to the Naval Test Section at Naval Air Station (NAS) Anacostia near Washington, D.C. coincided with his first marriage to the author’s mother.

Operating from a moving vessel requires aircraft with different capabilities and structural tolerances than their land-based cousins. Not only did this add an extra element of danger, in terms of performance the first two decades of carrier aircraft design also suffered a performance lag. While army air force fighters were concerned with performance, naval fighters also needed to be stored in smaller hangers, able to land on a moving platform and take off and land in a much smaller space. Because of this, biplanes were preferred; and were in naval inventory long after the USAAC/USAAF had retired theirs. Trap flew nearly every design that entered naval service, from single-engine fighters to larger flying boats. Some of these led to greater designs like the Consolidated PBY flying boats, while others were evolutionary dead-ends, such as Curtiss F9C Sparrowhawk, designed for use with the rigid airships USS Macon and USS Akron. He was assigned as Chief of Naval Flight Test Section from 1940-1941, and would use that position to do all that he could to get the United States on a proper war footing.

When he took over Flight Test Section, the war in Europe had been raging for a year. The aircraft used in the Battle of Britain were far faster and more heavily armed than anything in the US Navy inventory, or furthermore anything that was on the horizon. The problem could be dealt with in two ways: develop techniques to allow the slower Brewster Buffalo and Grumman Wildcat (especially the latter) to hold their own against German or Japanese aircraft, and develop better aircraft. The Flight Test Section would endeavor to do both. They would also work with aircraft manufacturers at every step of the way to make sure that any aircraft design that the Navy (and Marine Corps) was interested in would meet required wartime specifications.  Trap’s influence and insistence led to Chance-Vought completely redesigning their F4U corsair fighter, and to Grumman shifting its efforts to the F6F Hellcat, a larger, faster relative to the smaller Wildcat. These aircraft would eventually sweep the skies over the Pacific of Japanese aircraft. There was an element of luck to this. In July 1942, a Japanese Zero fighter had crash-landed on the Aleutian island of Akutan. It was recovered by the United States, and after repair, used to test out American aircraft and tactics for defeating it. One of the first Us pilots to fly the Zero was Trap. This was not the only non-Naval fighter he tested. At about the same time that the Hellcat was reaching fleet service, Trap flew to Muroc Field (now Edwards Air Force Base) to fly the first American jet fighter, the Bell P-59 Airacomet. While it was outmaneuvered by propeller fighters at low altitude, its performance was steady and harkened to the future of aviation, both land-based and naval.

After leaving the Flight Test Center, Trap was given command of the escort carrier USS Breton. His predecessor had not been popular; and Trap’s ability to get things ready for the final stages of the Pacific War echoed his first service on the USS California. He would later serve as Task Force Chief of Staff to Admiral Arthur Radford. From the end of the war to the end of his career, Trap would serve as the commander of the Test center at NAS Pawtuxet, MD and the carrier USS Coral Sea. Both billets would see him oversee the deployment of the first generation of carrier-based jet aircraft. After sick leave he served on the boards of several naval contractors, the high point being his 1957 induction into the Society of Experimental Test Pilots (SETP). The biography he jokingly submitted to his induction ceremony seems to sum up the man nicely:

I was born naked in 1902 in Elizabeth, New Jersey, and attended Pingry School in that town and the Naval Academy-from which I graduated without distinction in 1923. This led to serving 29 years in the United States Navy, 26 of which were in the semi-respectable status of Naval Aviator. Practically all of my shore duty was in Flight Test where I became familiar with the lingo and some of the primitive procedures of the 30s and 40s. I commanded a couple of patrol squadrons and the carriers USS Breton and USS Coral Sea-without going aground-noticeably. So in 1951 I became a Rear Admiral. In 1952 the medicos caught up with me and grounded and retired me. Since 1953 I have been loosely associated with Grumman Aircraft and have resided in Long Island. I am very happy in my status as an Honorary Fellow of SETP, where I can harmlessly indulge my opposition to any further progress in any direction.

This is a fine volume overall. The authors were the first individuals I encountered at a recent McMullen Naval History symposium; and the excitement and knowledge for the subject that they displayed in person is readily apparent in the book’s pages. The only criticism would be to include a few more illustrations of the aircraft that Trapnell flew. This book will appeal to anyone interested in naval history, naval aviation or aviation in general.