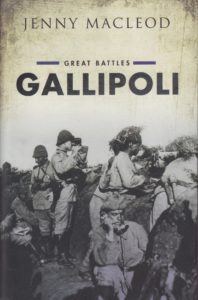 The campaign fought on the Gallipoli peninsula in 1915 has not suffered from a want of telling. With the centenary of its occurrence now at hand, yet another entry faces the immediate hurdle of offering perspective where others have not. This is handsomely achieved by Jenny Macleod, a Senior Lecturer in History at the University of Hull, who dissects the lasting legacy of those events where the fortunes of three empires clashed (i.e., Ottoman, British and French) to resolve the status of the Turkish Straits for the benefit of a fourth (i.e., Russian) with key assistance rendered to the defenders by two others (i.e., German and Austro-Hungarian). Thus, Gallipoli is never so much military as the incubator of a particular cultural remembrance set within the needs, norms and nations who fought on the peninsula.

To be sure, Macleod does not neglect the campaign that was Gallipoli, but as her purpose is to explain how and why events are recalled, the operational accounting presented is circumscribed and weighted to its military rather than naval dimension. It also means that the political and strategic contexts of the campaign and their place within the greater war (and even the experience of war in general) are treated with a measure of circumspection. Some weakness stems a number of assertions made, such as the claim that the British declaration of war in 1914 automatically applied to New Zealand. In truth, New Zealand had already informed London at the end of July of its support. Such lapses are not critical, but they do inform why the campaign has always retained less resonance for Britain and France and—for that matter Turkey—than for Australia and New Zealand who, though junior partners in the endeavor, remain its most fervent commemorators.

That commemoration began even as fighting continued on the peninsula and suited the needs of sustaining morale on the home front while paying homage to returned veterans. As Macleod explains, popular histories and memoirs available throughout the British Empire fed a common legacy in the initial period, though matters quickly digressed. With both Britain and Australia writing official histories, it was only natural interpretation and emphasis of events would follow different lines. Without access to Imperial Cabinet records, the Australian version stressed the role of the individual soldier. This limitation in the Australian accounting is omitted by the author and so too the sacking of Sir Gerald Ellison, the first official British military historian of the campaign whose reply The Perils of Amateur Strategy appeared two years before the author accords first criticism of the campaign. Accordingly, Gallipoli offers a survey and not a sustained examination of recollection and remembrance.

The Gallipoli legend assumed its greatest prominence in Australia. In the view of Macleod, Gallipoli can be cited as Australia’s foremost cultural contribution to the world, although a host of pop music groups dating from 1960s might suggest otherwise. In the case of New Zealand, its establishment as a self-governing dominion was of more recent vintage than Australia, but its cultural and religious traditions had progressed along distinct lines. Consequently, commemoration, if sharing much in common with its larger Commonwealth found across the Tasman Sea, diverged in three vital ways. Anzac Day assumed the overtones of a religious holy day with this view ordained in law. As such, celebration, if broad, proved more constrained. Just as importantly, the role of the Maori was not forgotten. Moreover, remembrance became firmly anchored in New Zealand’s imperial ties in a manner alien to Australia.

Meanwhile, commemoration in Britain was more focused at the regimental level. That the affair ended in ignominy may be one reason, but even resounding victories such as Trafalgar and Waterloo have fared little better. Dunkirk and the Battle of Britain in the next war would be cause for contemporary celebration and so too El Alamein, but none would secure the standing that Anzac Day achieved in the antipodes. With so much history behind her already, Gallipoli was but a brief signpost in another imperial chapter. Still, what was commemorated there proved more than allowed in Ireland where remembrance escaped recall nearly altogether. In this, the newly independent Irish Free State had little desire to celebrate the sacrifice of its sons in a British cause fought for British aims.

In postwar Turkey, remembrance offered a chance to celebrate a victory in the recent war where few were to offer. Here, the association of Mustafa Kemal, the founder of the modern Turkish state, offered one reason for commemoration. Yet given the horrific losses incurred a more positive one remained the decisive defeat inflicted on the allied fleet on March 18, 1915. This pivotal event sealed the end of the attempt as a purely naval demonstration and moved matters into the realm of a combined operation. The irony is that the initial contribution by Australia and New Zealand to that combined operation was as a feint to distract Ottoman forces from the main effort launched at Cape Helles by the British Army. This raises the question why April 25 has assumed the dimensions that it has as the point of collective remembrance. It did not mark the start of the campaign nor the moment when Australian and New Zealand forces first became engaged in combat during the World War. Several reasons suggest themselves, but that commemoration is as much about serving the needs of the present as marking the deeds of the past must be counted the primary one. Macleod’s survey is a welcome addition and though saying little new about a particular battle manages to say quite a lot about remembrance and commemoration as a cultural legacy of war. As such, Gallipoli is warmly endorsed.

Dr. Moretz serves with the British Commission for Military History.