“To the fair world: and heedless of repose
We climb’d, he first, I following his steps,
Till on our view the beautiful lights of Heaven
Dawn’d through a circular opening in the cave:
Thence issuing we again beheld the stars.”

They were your friends and neighbors in your hometown. They were your family: a father, a brother, or a son. They answered the call and gave an oath to protect the United States against all enemies, foreign or domestic. They trained hard and learned fast on their feet. They earned their wings and flew military machines of warfare into harm’s way. The followed orders at the mercy of policymakers thousands of miles away in Washington. They grew tired and frustrated over the conduct of the war. They remained steadfast for their brothers in arms. 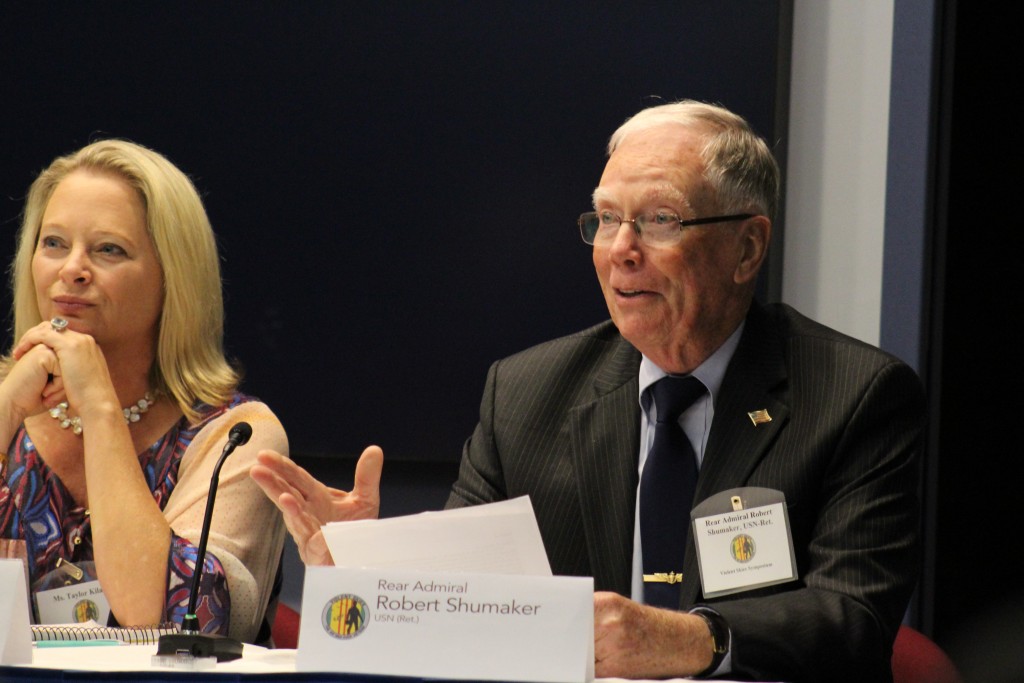 They lost friends and comrades. They ate a steady diet of cabbage soup and were relentlessly tortured by an enemy they didn’t understand. In the end, those who survived through it came home to continue their careers or rotate into civilian life with little fanfare or celebration during one the most tense and politically charged times in U.S. history. Some never came home the same. Others are still there, still unaccounted for a half century later. Their names alongside 58,195 of their brothers and sisters are now inscribed on a dark granite facade here in the heart of our nation’s Capitol. “It’s design was meant to be like a dagger into the heart of the American people,” said Vietnam Veterans Memorial Fund President and CEO Jim Knotts during the symposium’s closing reception and banquet.

Who were the enemies? Who did we lose and why did we lose them? Those questions remain  because war IS hell, and the men and women who went through it were much like Dante in the Inferno, venturing into the deep places where the sun is silent. 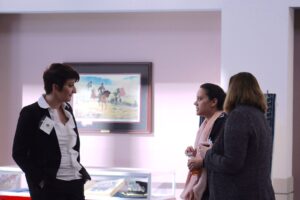 Attendees converse in the atrium of Marshall Hall at National Defense University, our gracious event hosts. (Photo by Matt Eng/NHF/Released)

These were some of the realities faced by countless individuals involved in the air war over Southeast Asia during the Vietnam conflict. From the early 1960s through the evacuation in 1975, airmen and aviators of the United States Army, United States Coast Guard, United States Air Force, United States Marine Corps, and United States Navy traveled to the jungles of Vietnam and its surrounding countries to wage war over their violent skies. Scholars, students, and veterans came to National Defense University in Washington, D.C., this week to discuss the wounds left from the air war to see how well they have healed fifty years later. The conference was co-hosted and coordinated by five military non profit historical organizations (Army Historical Foundation, Air Force Historical Foundation, Foundation for Coast Guard History, Marine Corps Heritage Foundation, and Naval Historical Foundation) located here in the Washington, D.C. area. Members of each branch, both active duty and retired, comprised a strong core to the nearly one hundred and fifty registered attendees to the symposium.

The Vietnam War is awkwardly placed in United States history. The conflict is far enough away to be considered a historical event by most scholars, yet simultaneously close enough to have many surviving veterans alive today who fought through it. Veteran stories continue to add to the developing narrative of conflicts fought by courageous men and women throughout the history of the United States. Yet in no other time has a protracted conflict been as contested and ambiguously decided as the quagmire in Vietnam. These individuals, many of whom are now decades removed from military service, courageously put themselves back into the cockpit once again for the benefit of historical research and reflection. One can only imagine the number of heavy hearts there were in each session as the symposium progressed.

Because the number of Vietnam veterans are beginning to dwindle, it is more important than ever to hear their side of the Cold War’s hottest conflict. The Violent Skies co-hosts wanted to ensure that Vietnam veterans received equal billing to academic historians and scholars who presented papers. It was comforting to see such a unique balance between combat veterans, military historians, and up and coming scholars. One of the highlights of the entire symposium was hearing the personal reminisces of former POW Rear Admiral Robert Shumaker, USN (Ret.), a resident of the Hanoi Hilton and member of the famous “Alcatraz 11.” Author Taylor Kiland’s discussion of her book Lessons from the Hanoi Hilton added extra weight and a sobering credibility to the panel itself. The war may be over, but the discussion is only beginning during these commemorative years. Each veteran that attended was given a special pin provided by the Vietnam War Commemoration as a small thanks to their service and sacrifice. 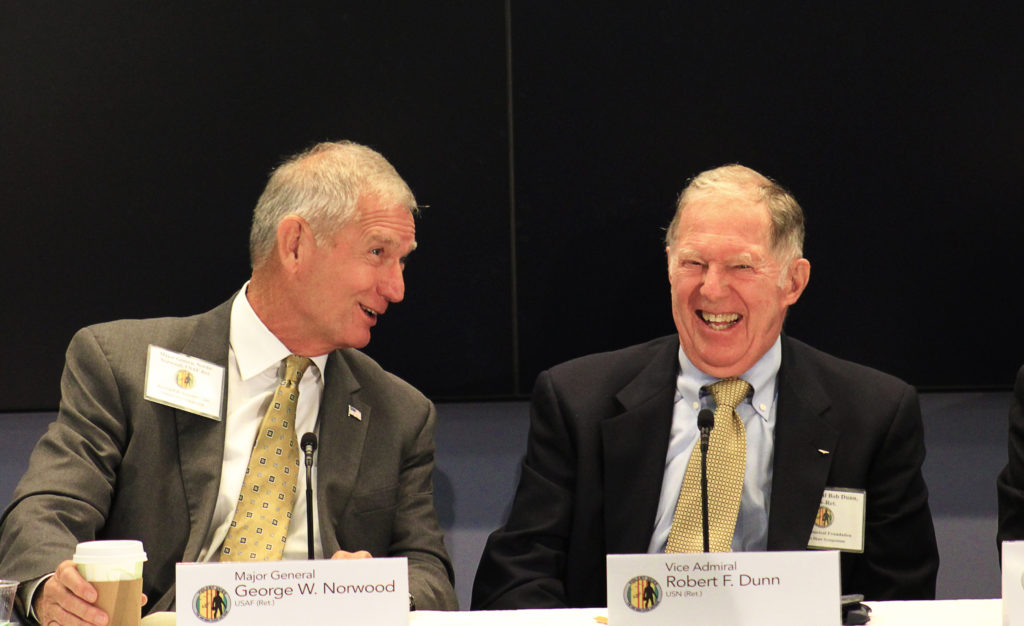 What made the skies violent? Why give the symposium such a jarring title?

These questions were discussed in the opening plenary to the conference on Thursday morning.   NDU professor Dr. Mark Clodfelter gave a riveting and passionate overview to the entire air war and the myriad operations conducted over Vietnam, Laos, and Cambodia. According to Clodfelter, the air war increased exponentially after the Tet offensive in 1968 because the war itself became more conventional in the wake of the strategic failure of Operation Rolling Thunder, the massive aerial bombardment campaign waged from March 1965 until November 1968. Policymakers in Washington struggled to find a more effective way to wage the air war. This resulted in an unfortunate increase in air losses in the war’s pivotal years between 1968 and 1972. Rivalries between military branches added to the mix and confusion in the fog of war. Politics and military operations became like oil and water, and many of those aviators who flew during Vietnam paid the price. By the end of the war in 1975, the United States military lost nearly 10,000 aircraft and helicopters. Thousands of men perished in combat, became Prisoners of War, or are still missing in action today.

A multi-service veterans panel to the plenary offered commentary to Dr. Clodfelter’s weighty discussion. Any misgivings about the symposium’s title were immediately squashed by the panel of senior service retired officers. As retired Army Major General and former Chief of Army Aviation Carl McNair said in the opening Plenary, the title was apt to the realities faced by aviators through the conflict in Southeast Asia:

“Our skies were violent [. . .] they really were. They were just as ferocious as you say they were.”

Major General George W. “Nordie” Norwood, USAF (Ret.) and former NHF President Vice Admiral Robert F. Dunn, USN (Ret.) offered additional commentary to Dr. Clodfelter’s presentation. Both men reflected on the utility of air power, noting the transition from interdiction, and strike escort to a hunter-killer mentality. It seemed remarkable that any kind of cooperation occurred between aviators given the lack of central command over the air war itself. As Vice Admiral Dunn noted, “we got our share of excitement, no matter where the flew.” Unlike historians studying the war today, Major General Norwood made sure to detail how their war “was in real time,” and thusly did not benefit from the historical perspective of those who recount and study it today.

All three agreed that the entire conflict itself was ultimately about doing their job and working hard to make sure “the guy flying next to you or with you had as good a shot of getting home as (they) did.” That proved to be a reality reserved only for the fortunate, as Admiral Dunn commented on one panel later that afternoon. During one particular operation, his wing man during a particular mission took a direct hit. Major General McNair also provided several instances where men in the back seat of his helicopter died in transit to safety. 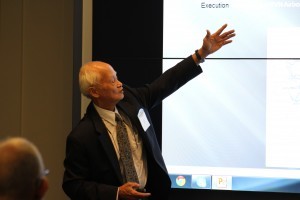 Panel presentations were broken up into four concurrent sessions over the two-day period. Sessions were presented chronologically between the Johnson Years (Thursday) and Nixon presidency and evacuation (Friday). Topics on combat operations included everything from Navy RA 5 Reconnaissance and OV-10 Bronco aircraft use for counterinsurgency to the massive firepower of the Air Force B-52 throughout Southeast Asia. Rotary wing operations of the United States Army were also thoroughly discussed by both active duty and retired Vietnam veterans. Conversations amongst scholars and veterans, albeit tense at times, was beneficial to the ongoing dialog of the air war. For may veterans, it was as if the war itself had seeped into their skin, and the symposium served as a way for them to “sweat it out” amongst friends and colleagues.

Several panels highlighted a different take to the conventionally-held, combative side of the air war. Discussions about the aeromedical evacuation, Navy/Coast Guard search and rescue, psychological operations, chemical defoliation, air evacuation, and the impact of the air war on the home front were also covered.

The final plenary session reminded attendees of the harsh realities continually faced by those either living or left behind the combat zone. Discussion in the appropriately titled “Left Behind: The Air War Never Ended” plenary session was arguably some of the most beneficial and meaningful of the entire symposium. You could visibly see some who attended the session uncomfortably shift in their chairs during Legacies of War founder Channapha Khamvongsa’s presentation on the millions of pounds of unexploded ordnance still located inside Laos today. Stanley Brown, a colleague of Channapha’s at the Department of State, detailed the various ways they are working inside the country to make it safe and secure once again for their populace. Finally, Army Lieutenant Colonel Todd Kelly’s discussion of the ongoing efforts of the newly formed POW/MIA Accounting Agency gave hope to eventually recovering all those who deserve to come home after their last full measure of devotion to a country that never completely understood how or why the war became so violent for so long. 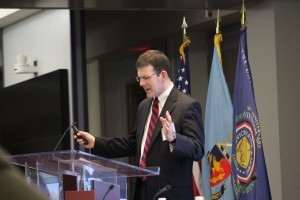 Any good symposium will have its attendees asking more questions than when they came. Several attendees noted the difficulty in choosing the most interesting panel or plenary session. In the case of Violent Skies, there were too many to choose from. Attendees familiar with major offensives such as Rolling Thunder, Arc Light, and Linebacker I/II were treated to discussions about equally important (and yet still violent) operations named Ranch Hand, Frequent Wind, Commando Hunt, and Menu. As Dr. Mark Clodfelter noted in the opening plenary, “there was not one single air war over Vietnam, but instead air WARS.”

Others who could not attend last week’s symposium will still benefit from the rich historical research and discussion conducted there. Thanks to Steve Maxner at the Texas Tech Vietnam War Center and Archive, presentations and papers given at the symposium will eventually be stored for posterity on their site. Despite the near herculean efforts by program coordinator and NHF Historian Dr. David Winkler, there are still more topics from each service that still need to be covered. The conversation about the Vietnam air war can continue for future events, leaving open the possibility for more joint symposiums in the future with he five historical non profit organizations. Please stay updated for the availability of the presentations given in the near future.