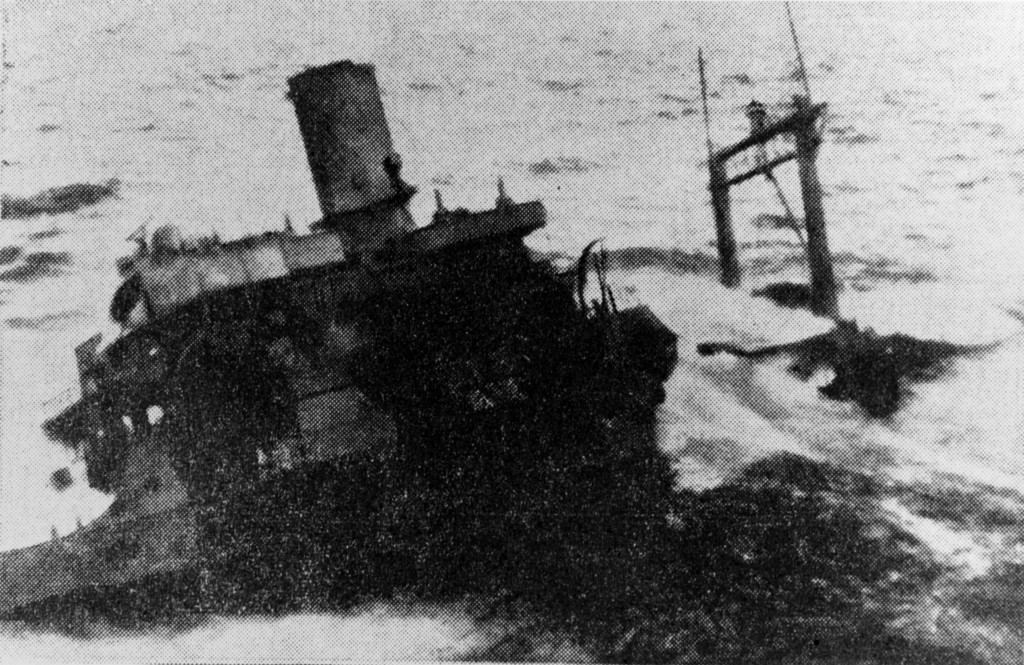 THE WRECKAGE OF THE U.S. NAVY SUPPLY ship Pollux lies aground off the Newfoundland coast, where it foundered in a storm February 18 with many lives lost. The U.S. destroyer Truxtun was wrecked near the same spot during the storm. (AP Wirephoto/NHHC Collection)

This post provides a description of the events surrounding the loss of USS Truxtun (DD 229) and USS Pollux (AKS 2) by grounding off the coast of Newfoundland in February 1942. Because over 200 lives were lost, it is considered to be one of the worst disasters in Naval history. The information contained in this post was obtained from a number of sources including NAVSOURCE, DANFS, Theodore Roscoe’s Tin Cans, and a variety of online web sites.

In order to fully understand the circumstances surrounding the event, it is first necessary to look at it from an overall historical perspective. By 1939, major world events had taken place. Germany invaded Poland and Britain and France declared war in response. Meanwhile in the Atlantic, German commerce raiders began operating. This resulted in the establishment of a neutrality patrol in the Atlantic. In 1940 Great Britain and the United States signed the Destroyers for Bases agreement. That same year, Germany began unrestricted U-Boat warfare. It was decided at that time to establish naval bases at Casco Bay, Maine, and Argentia, Newfoundland. These sites were chosen because of their proximity to convoy routes.

The Argentia base was located at the north end of Placentia Bay on the southern coast of Newfoundland. It was commissioned in July 1941. The base included both naval facilities and an airfield.

The three ships involved in the incident were the USS Truxtun (DD 229), USS Pollux (AKS 2), and USS Wilkes (DD 441). A brief description of each ship follows:

USS Truxtun (DD 229) was a Clemson-class destroyer. It was one of 156 ships of the class that were commissioned between 1919 and 1922. A number of ships of the class served in World War II. They were frequently referred to as “four pipers”. Most of Truxtun’s service prior to War II was in the Pacific. The ship was transferred to the Atlantic Fleet in 1939 where it performed patrol and convoy escort duties. At the time of the grounding, the ship’s crew consisted of 156 personnel.

USS Pollux (AKS 2) was originally built as a standard Maritime Commission Design C-2 type cargo ship. It was launched in 1939 and acquired by the US Navy for conversion into a general stores ship. It was commissioned in May 1941. It served with the Atlantic Fleet on regular provisioning cruises. Its normal crew complement was 159 personnel. However, it was carrying 74 additional personnel on its trip to Argentia for a total of 233.

USS Wilkes (DD 441) was a Gleaves-class destroyer. It was commissioned in April 1941. At the time, it was one of the Navy’s most modern and technically advanced destroyers. For this reason, it was often assigned flagship duties when operating in convoy. The Gleaves-class was the last of the of the raised forecastle “step deck” type destroyers.  Wilkes served in the Atlantic until 1944 when it was transferred to the Pacific. It was decommissioned in 1946. Its normal complement was 239 personnel.

In February 1942, Pollux departed Casco Bay, Maine, along with Wilkes and Truxtun who were assigned as convoy escorts. The ship was carrying a cargo of bombs, radio equipment, aircraft engines, and other supplies for delivery to the naval base at Argentia. Wilkes was acting as the convoy flagship. As the ship approached Newfoundland, a severe winter storm developed and visibility was reduced to near zero and the ships were unable to effectively obtain radio direction finder bearings. It appears that the ships were driven northward of their plotted track. This led to the groundings on 18 February 1942.

Placentia Bay is located in the Southeast part of Newfoundland, It is bounded by the Avalon Peninsula to the East and the Burin Peninsula to the West. Argentia is on the East side of the bay, about 70 miles to the north of open water. The disaster actually took place on the southwest side of the Burin Peninsula after the ships got lost In the storm and failed to make their right turn to go up the bay to Argentia. As can be seen in the following photo, this is a very bad place to run aground because the area has a rocky coast and is bounded by high cliffs, making rescue very difficult. 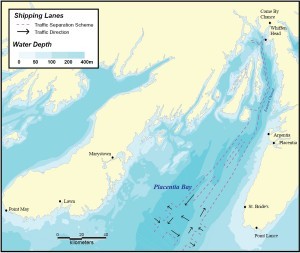 The groundings actually took place at about 4 AM on 18 February 1942 within minutes of each other. Truxtun grounded at Chambers Cove near the town of St Lawrence. The area is bounded by cliffs as much as 400 feet high. Pollux grounded about 1.5 miles to port of Truxtun at Lawn Point near the small fishing village of Lawn. The cliffs in this area are about 250 feet high.  As soon as the word got out of the grounding, the local villagers organized rescue efforts. Unfortunately, the only effective method for recovering survivors was by lowering ropes and dragging them up the cliffs before the tide came up. Because of the difficult surf and the bitter weather, loss of life was high on both Truxtun and Pollux.

Truxtun broke up almost immediately upon grounding. Out of the crew of 156, only 46 crew members survived and 110 were lost.  The survivors were rescued by residents of the nearby mining town of St Lawrence. They were picked up by the Navy the next day.

Pollux ran aground shortly after Truxtun. As soon as he realized that the ship was aground, the Commanding Officer ordered full speed ahead in order to keep the ship from sliding back and sinking into deep water. Some of the crew attempted to swim ashore via swim lines without success because the lines became oil soaked. Finally, lines with a boatswain’s chair were rigged to a ledge and the remaining crew members were conveyed ashore by that method where they were trapped on an icy cliff until rescuers arrived from the town of St. Lawrence. The ship broke up shortly thereafter. Out of the crew of 233 personnel, there were 140 survivors with 93 personnel lost.

Wilkes’ fate was very different. The ship actually ran aground slightly before Truxtun and Pollux. Fortunately, only its front portion ran aground. The ship was able to break free and back out to sea without casualties by moving personnel and cargo aft. Due to the seas, there was little they could do to help the survivors. Wilkes later proceeded to Argentia where she remained for six days prior to proceeding to Boston for repairs.

Out of a total of 389 personnel aboard Truxtun and Pollux, there were 203 casualties and 186 survivors. This made it the largest single casualty experienced by the US Navy in World War II up until that date. It remains among the worst in naval history.

A great deal of credit goes to the tireless, efficient, and in some cases heroic efforts of the shore side people of the towns of St Lawrence and Lawn on the Burin Peninsula. Without these efforts, the number of casualties would have been much higher.

The Naval Station at Argentia was decommissioned in 1973 and the land was transferred to the Canadian government in 1975. The last US Navy personnel left the area in 1994.