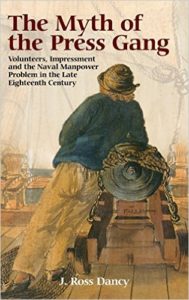 If you rely on nautical fiction or even some histories (John Masefield’a among them), you might believe the Royal Navy of the Age of Fighting Sail was mainly composed of impressed men, with many – if not most – conscripts being landsmen. The Myth of the Press Gang: Volunteers, Impressment, and the Naval Manpower Problem in the Eighteenth Century, by J. Ross Dancy challenges that view.

This book may be the first statistical study of Royal Navy manning in the eighteenth and early nineteenth century. Dancy goes to primary sources, examining muster books from 81 Royal Navy warships – three ships per year for nine years. Split between ships-of-the-line, frigates, and sloops of war, his survey spanned the French Wars of Revolution – 1793 through 1801.

The resulting database listed 27,174 men. Around 250,000 total men served in the Royal Navy over that span; Darcy examined a statistically significant fraction of the Royal Navy’s manpower.

His results are startling. Twentieth century historians assert at least 50% of the Royal Navy’s seamen were impressed, with estimates running as high as 80%. Darcy’s results reveal the actual total never exceeded 30% over the period studied. Generally less than 20% of the Royal Navy’s annual manpower intake came from impressed men. The vast majority of impressed men were mariners.  Only 16% were landsman.

Darcy unveils these statistics in the first two chapters: “British Naval Administration” and “Manning Statistics.” “British Naval Administration” examines how the Royal Navy’s administrators handled the problem of manning the Royal Navy. It covers a period from 1660 to the start of the French Revolutionary Wars in 1793. In “Manning Statistics,” Darcy looks at who made up the wartime crews of the Royal Navy’s ships by examining their backgrounds, ages, experience, and places of origins. His studies disclose seafaring to be a young man’s game. Two-thirds were under 30, and over half under 25. The muster books also reveal where the men came from – whether they were turned over (previously enlisted), volunteers, unknown, or Quota Act volunteers. Most landsmen who served were volunteers. At least 90% volunteered, and most were young; under 25.

The next three chapters, “Volunteers,” “Impressment,” and “The Quota Acts,” examine each source of manpower individually. Darcy examines who volunteered and why.  He looks at who was impressed and how the Impressment Service worked. He also looks at the Quota Acts, and how they added men to the Royal Navy.

In the process, his statistics demolish many long-held myths.  The Royal Navy proved popular both for experienced mariners and unskilled landsmen. It was seen as an opportunity for advancement. Manpower shortages resulted from a shortage of available sailors not a reluctance to volunteer. Impressment was a tool used to secure trained mariners. The Quota Act was more generally successful than generally credited.

The Myth of the Press Gang is groundbreaking. Darcy overturns long-held assumptions about the Royal Navy. His assertions are backed by impressive research. It is a book any serious student of the period will want to – and needs – to read.

A scholar of the Age of Sail, Mark Lardas is a frequent contributor to Naval History Book Reviews.