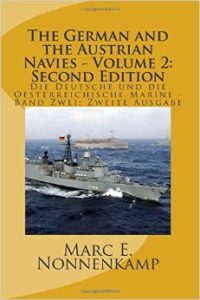 A couple of years ago, I reviewed the first edition of Marc Nonnenkamp’s two volume set, The German and the Austrian Navies. In my previous review, I highlighted many admirable qualities of these two volumes: 1) The comprehensive coverage of every ship that served in the navies of Germanic speaking peoples. 2) Ships planned but never built 3) Ships captured by the Germans and placed into service with their navy 4) Forty page essay on the German’s Operation Sealion, the planned assault on England. 5) Appendices listing additional sources – books and websites.

The larger issues that gave me concern – the lack of a ship index in a reference book and the paucity of ships’ photos (especially in color) have been rectified nicely. The reader will be especially drawn to the color paintings by the late marine artist Gunther Todt. In summation of the positives, the 2nd Edition is a clear upgrade. It is much friendlier to the researcher and more interesting to the casual reader who enjoys ships photos and excellent paintings.

I would like to end this update review here, dwelling on the substantial improvements that the author has made. Alas, I would be shirking my duty. One of my previous complaints seems to persist – errors and omissions. I have no expertise in the subject matter, but I do have some isolated familiarity.

For example, when serving as CIC officer on the Tattnall (DDG 19), my wonderful crew of radarmen hosted their opposite numbers from the visiting sister-ship Lutjens in a beach party in Mayport in 1970. Wisely the Americans brought the food and the Germans the beer. So I looked up this BIW built German DDG. The text reports she is armed with “…40 surface-to-surface missiles, 2 surface-to-air missiles (SAM)…” The magazine for the Mark 13 launcher holds 40 SAMs. I don’t know what the mention of 2 SSMs is in reference to. The description goes on to credit Lutjens with main propulsion diesels (incorrect) and four boilers.

In my previous review, I mentioned my interest in three 19th century German warships that were present for the 1889 Samoan cyclone – Olga, Adler and Eber. The first two ships were easily found thanks to the new index. The third, Eber, does not seem to be included based on the index. The gunboat Eber (1903) in the index (pg. 183) is not the one lost in Samoa. I assume her class is missing from the text.

If the preceding errors were the sum total, then I would be carping over a small sample. The problem is that I want to rely on this reference, but I am hesitant. I just do not know the extent, if any, of additional errors. In summary, this is a substantially improved edition courtesy of the author’s hard work driven by a love for German history and her warships, but marred, perhaps only slightly, by nagging doubts of accuracy.

Captain Winn Price is a writer of naval historic fiction.