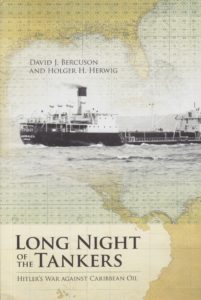 All the action in World War II did not take place in Europe, North Africa, or the Pacific.  David J. Bercuson and Holger H. Herwig thoroughly explained how Hitler’s Kreigsmarine endangered the course of the war for the Allied forces by sending its “gray sharks” to the Caribbean to sink any vessels they encountered, particularly those carrying crude oil and bauxite. Using war diaries, first-hand accounts, and primary materials from the German Federal Military Archives and the Deutsches U-Boot Museum, Long Night of the Tankers provides an exciting look at the submarines that caused so much fear and destruction in the North American theater.

Concentrating on the period between the United States entry into the war in December 1941 and 1943 and covering Operation New Land (“Neuland”), the authors explained the differing strategies of the leaders of the German Navy, Admirals Erich Raeder and Karl Dönitz.  Raeder wanted the submarines to destroy the oil refineries and tank farms in, for example, Aruba, while Dönitz wanted a “tonnage war” and permitted his U-boat captains to sink any vessels they thought carried materiel that could aid the enemy. Ultimately, the German submarines sought victims from the Panama Canal to the east coast of Brazil and beyond.

To achieve the goals of Dönitz, the U-boat commanders understood the importance of surprise attacks. The downside to the numerous attacks on Allied shipping between February and March 1942 was that the Allies increased their defenses against the U-boats. Ultimately, the Allies developed better systems to detect the presence of the German submarines and had aircraft with lights attached to their underbellies that could shine on the submarines as the U-boats surfaced during the nights to permit fresh air to flow into the vessels and to recharge their batteries.

The Caribbean became a key theater of war because of the minerals and oil in the region.  Aruba, Curaçao, and Trinidad refined the largest amount of oil in the world and their facilities proved particularly important because of the 100-octane aviation gasoline they produced and so necessary for the British air force. In addition to the oil and gasoline, tankers also carried, for example, bauxite, tungsten, nickel, platinum, copper, and tin, minerals necessary for the production of war materiel, especially aluminum needed for the building of ships and planes.

The majority of the book concerns itself with the day-to-day operations of the German vessels, their commanders, and crew, and goes into great detail on the battle scenarios that the U-boats encountered. On occasion, the inside temperatures of the vessels reached 40° Celsius with 100% humidity. When damaged by Allied attacks, the lights went out and the head spilled, causing even normally unpleasant conditions to quickly deteriorate. Concentrating on the operations of Albrecht Achilles, Werner Hartenstein, and Jürgen von Rosenstiel, as well as a few others, the authors explained the U-boat operations with a wonderful mix of military action and personality. As in the film “Das Boot,” the reader comes to see the officers and crew as more than just the enemy.

As the submarines had limited amounts of fuel and torpedoes, their time in the Caribbean proved limited and they needed to make the long return journey to the French coastal harbor at Lorient. While there, Admiral Dönitz greeted the victorious submarine commanders with medals and shore leave or reprimands for those commanders not aggressive enough against the Allies.

The questions that arise from the book are brief and include what happened to all the unexploded torpedoes and bombs in the Caribbean and what was the environmental impact of the attacks on the tankers? Why did the German Navy continue to give the U-boats often ineffective “eels” (torpedoes)?  As the Allies continued to improve their defenses against the German attacks, why did the German military fail to counter the Allied improvements? The book also provides a wonderful glossary, bibliographical essay, and photographs. There is only one small detraction in the work; the authors occasionally used clichés that could have been avoided, such as “freshly baked,” “pissed off,” and “born leader.” That aside, this is an excellent book, well worth reading.