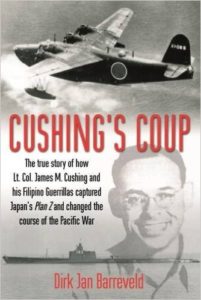 Every once in a while there is a book about a forgotten or neglected aspect of World War II history that makes a reader wonder why this story has not been turned into a movie.  Cushing’s Coup is one of those books, managing not only to tell the story of how Cushing’s daring and independent spirit as a guerrilla leader on Cebu during World War II sought to preserve both the well-being of the local population during occupation, but also managed to provide the Allied forces with detailed plans about the Japanese military in 1944 that greatly influenced the dispositions of the American fleets in the Battles of the Philippine Sea as well as Leyte Gulf. It also led General Douglas McArthur to push the timetable of his return to the Philippines two months earlier. As the author notes, his leadership and his intelligence gathering was worthy of the Medal of Honor, and it is unjust that the location of his grave is unknown and that his heroism is largely unknown today. Of course, if this book is widely read, memory of his deeds is likely to increase.

The book does more than detail this incident, although it serves as the inspiration of the book.  Rather, Barreveld manages to place Cushing’s actions as a local guerrilla commander in a larger context that examines the American imperial presence in the Philippines, the importance of the Philippines for its natural resources as well as for its control of vital shipping lines for Japan, the power of the native oligarchy in the Philippines that to this day has hindered a more just political and economic order, and the lure of mining in the Philippines that led James Cushing and at least two of his brothers to travel there during the interwar period. Barreveld also manages to examine Cushing’s behavior with regards to Plan Z in the larger context of guerrilla activities in the period between 1941 and 1945, and the achievement of the Cebu guerrillas under his command, including their ability to avoid infiltration by the Japanese and their impressive record in battle and in raids against the Japanese occupying forces.

One of the most compelling aspects of this book, and what makes it a likely source material for a gripping war movie, is the descriptive nature of various elements of the story of Cushing’s resistance against Japan and the travel of Plan Z in absolute secrecy on both sides.  After a dramatic plane crash leaves some high-ranking Japanese officials as captives of the local guerrillas, a massive crackdown by Japan’s occupying forces follows, and the absence of timely communication with Allied commanders leads Cushing to exchange prisoners for a release of military pressure on the local population. Meanwhile, some uncoded Japanese documents are found on the beach. Once their value is realized, they were shipped to Australia via submarine with everything being done in the highest level of secrecy. Likewise, the behavior of the guerrillas as well as the Japanese authorities in Tokyo to the surviving prisoners in the aftermath of their capture, and the treatment of local dignitaries by the Japanese, is of a gripping nature that would be likely to be of interest to those who have read books like Captured:  The Forgotten Men Of Guam, Unbroken, or King Rat, as portraying various aspects of the Japanese Co-Prosperity Sphere and how it acted towards those under its misrule.

The book also manages to provide detail of the command infrastructure of the various guerrilla groups, and how there was a great deal of political rivalry and infighting among them.  The tardy recognition of Cushing’s leadership by Allied command hindered the logistical efforts of the guerrillas in Cebu, forcing them to be more resourceful in acquiring supplies from Japanese occupation forces in the absence of local capabilities in manufacturing their own munitions, and also hindering promotions and recognition of the achievements of the Cebu guerrillas. The political infighting on the side of the Allies, including the lure of betrayal, which was avoided by sound intelligence work, is one of the more intriguing elements of the story, demonstrating that issues of command for guerrilla operations is seldom smooth and depends on a great deal of diplomatic action as well as the ability to maintain communications with cells in occupied territory, no easy task.

Ultimately, this book serves several functions.  For one, it reveals the serendipitous discovery and savvy exploitation of the intelligence coup of the naval plans of the Imperial Japanese Navy for 1944, demonstrating the importance of intelligence to the prosecution of the Allied effort during the Pacific War, and how that intelligence depended on little-known and poorly remembered people on the ground like Lt. Col. James Cushing and his local guerrillas of Cebu. Also of great interest, besides the value of this work in the larger place of World War II historiography, is the attention paid to areas of political, diplomatic, and logistical skill, a vivid portrayal of the difficulties of guerrilla and anti-insurgent combat, and also the difficulties faced by war heroes in being remembered when their service has taken place in what are now post-colonial regimes.  In providing a record of the heroism of a forgotten man, this book serves to enlighten its readers about a man as well as the place and time in which he operated, all of which are insufficiently known even by those who are avid readers of World War II history.