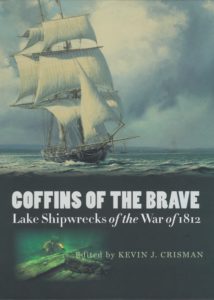 Large in size and large in scope, Coffins of the Brave is a tour de force.  Published in 2014 to coincide with the bicentennial of the end of the War of 1812, this 415-page opus reflects decades of serious scholarship, extensive field work (which means a great deal of intensive diving, underwater excavation, and documentation), and the coalescing of thought around the topic of more than a war on the water. This is a thoughtful treatise about the ships of that war, built for its campaigns on the lakes. The lakes were a critical theater of the war, and while history books are replete with accounts of the battles, and of personalities like Oliver Hazard Perry, there is much that has never been mined. As editor and author Crisman notes, “significant elements of the story are missing, many of which never made it to the documentary record in the first place.” (p. 354). Into those gaps steps archaeology – not only as practiced in the field, under water or on beaches and mudflats, but also in the laboratory. This book chronicles more than a century of ship finds in the lakes, ranging from accidental finds to centennial fervor leading to the raising the rebuilding of Perry’s Niagara, to more modern archaeological projects.

Kevin Crisman is eminently qualified as the editor and as author of much of this book.  Associate Professor in the Nautical Archaeology Graduate Program at Texas A&M University and director of the University’s Center for Maritime Archaeology and Conservation, Crisman has pursued the subject for decades. His hands-on work in the field has been followed by years of study at Texas A&M, where he has meticulously reconstructed the ships of the War of 1812 on paper, through ship models, and through detailed analysis of every aspect of the ships and the artifacts found with them. Among the co-authors are a select number of Crisman’s graduate students as well as colleagues in the field, all of whom write with authority and ease about the logistics of assembling a fleet in the wilderness where none existed before, and about the ships themselves.

They write about the campaigns, the battles, and the experience of life and death on these warships, both British and American. Walter Rybka, for example, offers the unique perspective of being the master of Niagara, the rebuilt warship that he now commands, and the insights gained from working and handling this historic brig. He also writes of the experiments in firing carronades into accurately built sections of Niagara’s hull. The descriptions and images quickly show how the wooden walls of the era became deadly sprays of splinters and chunks of wood that killed and maimed below and on the decks. Archaeologists Jonathan Moore, Christopher Amer, Kenneth Cassavoy, Christopher Sabick, LeeAnne Gordon, Sara Hoskins, Erich Heinold, Eric Emery and Erika Washburn provide detailed insights into the wrecks and projects they have excavated, documented and studied, including detailed work in some cases on wrecks pulled from the water years ago as relics but never truly understood until these scholars turned their attention to them. Arthur Cohn, dean of Lake Champlain underwater archaeology and founder of its maritime museum, rounds out the team of writers when with Crisman, tackles the naval archaeology of the Battle of Plattsburgh Bay.

Coffins of the Brave is exceptionally and extensively illustrated, with historic images and numerous photographs and drawings, many of them Crisman’s exquisite work. There are also sections with color images. Serious, detailed, and compelling, this is a hard book to put down once you start to read through it.  It is an essential addition to any library dedicated not only to the War of 1812, or the lakes, but also for those who love naval history, archaeology, and learning more about the physical record of the past adds much to our understanding of now only what happened, but what the human experience was like, and gives us insight into the lives of those who went before us.

Dr. Delgado is the Director of Maritime Heritage in the Office of National Marine Sanctuaries for the National Oceanic & Atmospheric Administration in Washington, D.C.