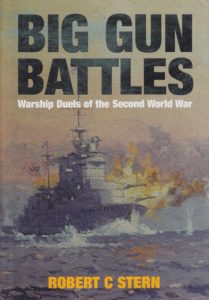 Robert C. Stern has added yet another authoritative work to his long list of titles about naval warfare written over the past thirty years. Having examined submarines, destroyers, aircraft carriers, kamikazes, and the U.S. Navy in Europe, among others, Stern set his sights on big-gun, World War II naval actions.

A major dilemma was deciding which battles to include or exclude. Stern used broad categories to make his determinations. The actions must be the most important and interesting naval gun battles. They must demonstrate how changes in technology led to an increased ability to destroy enemy warships by gunfire. The battles should have influenced the course of the war; yet the author also favored less well-known engagements.

Stern evaluated seven chronological periods starting with “The Curtain Rises (August 1939-June 1940)” and ends in October 1944. The commerce raiding cruise of the Panzerschiffe (pocket battleship) Graf Spee, the Battles of the River Plate, Denmark Strait, North Cape, Surigao Strait, and others are analyzed. The last three were subjects of full length books reviewed here. Lesser known engagements include the Battle of Punta Stilo (9 July 1940), the Action off Cape Spada (19 July 1940), and the Battle of Balikpapan (23-24 January 1942).

There is no getting around technical terms. Stern largely deals with these well in his introduction and does not bog the reader down with naval jargon. The novice is exposed to the Ford Range-keeper, Argo Clock, Dreyer Table, stereoscopic vs. coincidence rangefinders, and synthetic vs. analytic systems for finding firing solutions. They underscore a major point:  these technological innovations – most especially radar – had a “profound impact well before the end of the war”     (p. XVII).

Helpful and illuminating observations are provided. There is a “Who Shot Well” section at the end of the River Plate battle and similar after action analyses. The author addresses why German shooting was often accurate:  gunnery optics, doctrine, and training gave them “a decided advantage at long-range” (pp. 82-83), though one wishes there was more elaboration.  The reader learns why, despite the improvements in gunnery, the rate of hits in general in World War II was often two percent or less. It was interesting to learn HMS Hood had no immune zone against Bismarck’s 15-inch shells and that the heavy cruiser Prince Eugen’s 8-inch/60 caliber guns outranged Hood’s 15-inch/42 caliber weapons.  Stern provides several nuggets of interesting and applicable information.

One can question the battles chosen. Stern analyzed the Battle of Denmark Strait, but dealt with the sinking of the Bismarck succinctly. Given the author’s assertions that the naval long rifle was not the best weapon to sink a large, well-built enemy ship at close range (see the Battle of North Cape and attempts to sink the Yamashiro at Surigao Strait), an analysis of the Rodney and King George V’s attempt to sink the Bismarck would have been interesting. One also wonders why the Naval Battle of Guadalcanal (November 1942) was not evaluated.

A good case is presented asserting that technological advancements resulted in improved gunfire by 1944. On 28 June 1940, it took five Royal Navy cruisers almost an hour, using 85 percent of their ammunition, to sink one Italian destroyer, capable of only 25 knots. The RN here “displayed far more enthusiasm than skill in gunnery” (p. 39). The author demonstrated how naval gunfire progressed from “art to science,” (pp. 225-226) but does not make a totally convincing case. Earlier, Stern wrote: “Ships were hit or missed more by luck than intent and sometimes the ship that was hit was not the intended target” (p. 202). There is a brief (less than one full page), “Afterword” wherein Stern reasserts his major findings. Readers would benefit from a longer analysis synthesizing the many assertions put forth here. More pages devoted to a final summary and conclusion section would have been helpful.

The 148 pictures contribute mightily to the success of this book. Images of scorched gun barrels and battle damage have a more telling effect than words. Ample charts, maps, and drawings are useful. This volume is firmly grounded in primary sources, most notably, After Action and Admiralty reports. The explanatory footnotes provide a wealth of additional information. Though not necessarily for the neophyte, this book is a handy addition for serious students of World War II naval history.