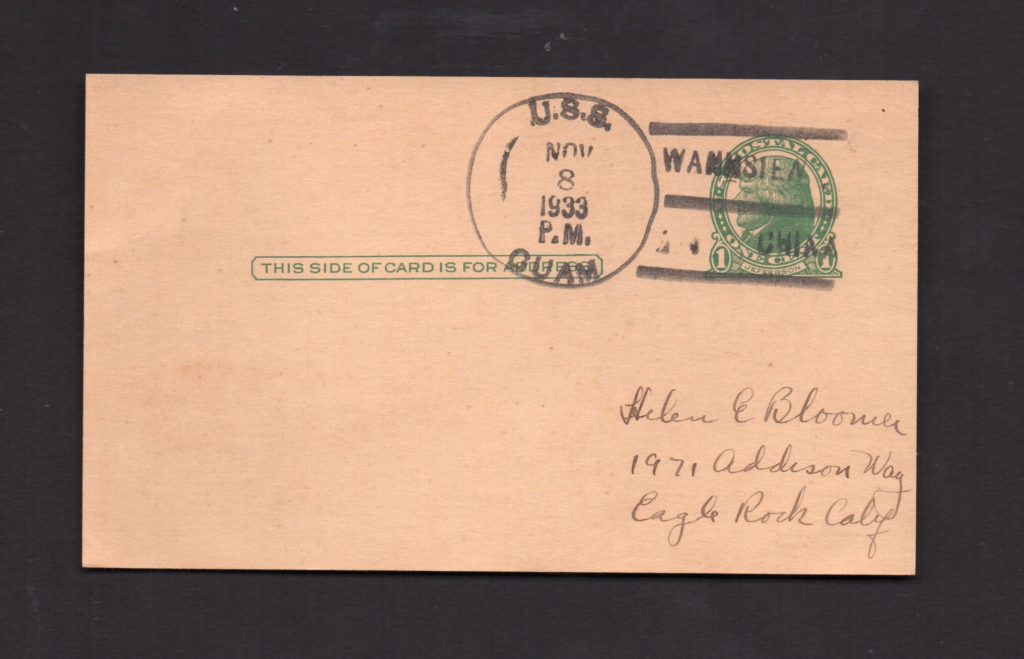 It is a simple penny postcard without a return address. It was mailed on Nov 8, 1939 and bears a USS Guam (PR-3) cancel with the location Wanhsein between the killer bars. The card is addressed to Helen Bloomer of Eagle Rock, CA (A neighborhood of Northeast Los Angeles). The message is typewritten which led me to believe that the sender was either a yeoman or a radioman aboard the ship. USCS member Lloyd Ferrell is a genealogy researcher par excellence. Lloyd researched the Bloomer family and could find no record of anyone by this name serving in the US Navy in the 1930s. It is Lloyd’s believe that the letter may have been written by a civilian friend of Helen Bloomer travelling in China. The card was accepted and cancelled aboard USS Guam. The card was carried downstream and mailed in a US Navy mail bag to the United States. The penny rate was sufficient postage for this type of mail. Lloyd and I can only speculate as to how two travelers in China happen to come across an English keyboard typewriter. It is possible that it was written by a Guam crewman who was a friend of the Bloomers.

Transcription (spelling and punctuation is original to document): 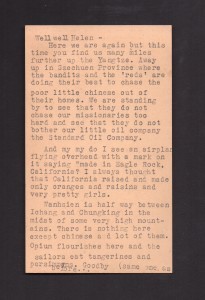 Here we are again but this time you find us many miles further up the Yangtze. Away up in Szechuen Province where the bandits and the ‘reds’ are doing their best to chase the poor little chinese out of their homes. We are standing by to see that they do not chase our missionaries too hard and see that they do not bother our little oil company the Standard Oil Company.

And my my do I see an airplane flying overhead with a mark on it saying “made in Eagle Rock, California? I always thought that California raised and made only oranges and raisins and very pretty girls.

Wanhsien is half way between Ichang and Chungking in the midst of some very high mountains. There is nothing here except chinese and a lot of them. Opium flourishes here and the sailors eat tangerines and persimmons. Goodby (same one as before…

In the first paragraph the author states where he is and why the US Navy was there. The sailors were in China to protect US missionaries; a cause near and dear to many Americans who believed that the US had an “obligation” to bring Christianity to the heathens. The protection of US economic interests in the guise or protecting “…our little oil company the Standard Oil Company” is a classic example of dollar diplomacy. The “reds” are Mao Tse Tung’s communist forces. The bandits may have been in the employ of the local warlord. This paragraph is one of the best descriptions of imperialism that I have ever read.

The last paragraph notes the large local population and calls attention to the opium issue. Opium had been introduced into China by the British who had a negative balance of trade with China since the Chinese insisted on payment in silver for tea. The British sale of opium, grown in India, was designed to create a demand for opium the sale of which would balance the cost of the tea. China and England fought the Opium War in 1842. One of the results of the war was the British got right to sell opium in China. The writer of the postcard was commenting on an issue that was almost 100 years old at the time that he wrote about it.

I wish I had this cover in my possession when I was teaching high school American History as this writer has summed up the Yangtze River Patrol, as a part of US foreign policy in the 1930s, as succinctly as anything I have ever read.

USS Guam underwent a name change on Jan 23, 1941, and became USS Wake. According to the USCS Catalog of US Naval Postmarks, the ship ”surrendered after futile efforts to scuttle at Shanghai on Dec 8, 1941, the only Navy vessel to surrender to the enemy in WW II…Named Tatara by Japan. Reacquired after WW II and transferred to China in 1945 as Tai Yuan. Captured by the Communist Chinese in 1949.”

NHF Member STEWART MILSTEIN is a Director of the Universal Ship Cancellation Society, where he also serves as the Sales Circuit Manager.