The newest addition to the U.S. Navy’s submarine fleet is a formidable one. At 377 feet in length, the newest Virginia-class submarine gives the kind of multi-mission flexibility necessary for a strong and adaptable submarine force operating in today’s dangerous waters around the world. For good reason, the U.S. Navy officially heralds it as “the most modern and sophisticated attack submarine world.” As a testament to this, the ship is projected to operate for thirty-three years without stopping to refuel. That particular characteristic sounds strikingly similar to the ship’s namesake, Senator John Warner – a man who never seemed to stop serving his country. This past weekend, thousands came to Norfolk, VA to honor the former Senator, Navy Sailor, and Marine for the commissioning of USS John Warner (SSN 785). It is the first submarine of the Virginia-class to be named for an individual. The Navy’s next ship to break the mold, USS Hyman G. Rickover (SSN 795), was recently announced here at the Washington Navy Yard in January.

NHF staff members were on hand on Friday night for a special Chairman’s Reception at the picturesque Half Moone Cruise and Celebration Center in Downtown Norfolk. The event, sponsored by the Navy League of Hampton Roads Commissioning Committee, centered around the ship’s namesake and his wife and ship sponsor, Mrs. Jeanne Warner. During the course of the evening on Friday, several awards, plaques, commemorative photographs, and paintings were given to the men and women involved in the construction and operation of John Warner. All on hand were delighted to honor a man whose service and sacrifice dated back to the Second World War.

It was also a special evening for the Naval Historical Foundation. Captain Creekman, USN (Ret.), NHF Executive Director, had the distinct pleasure of presenting the former Senator with an authentic 1975 Navy Jack to be signed and hoisted during the commissioning ceremonies the following day. 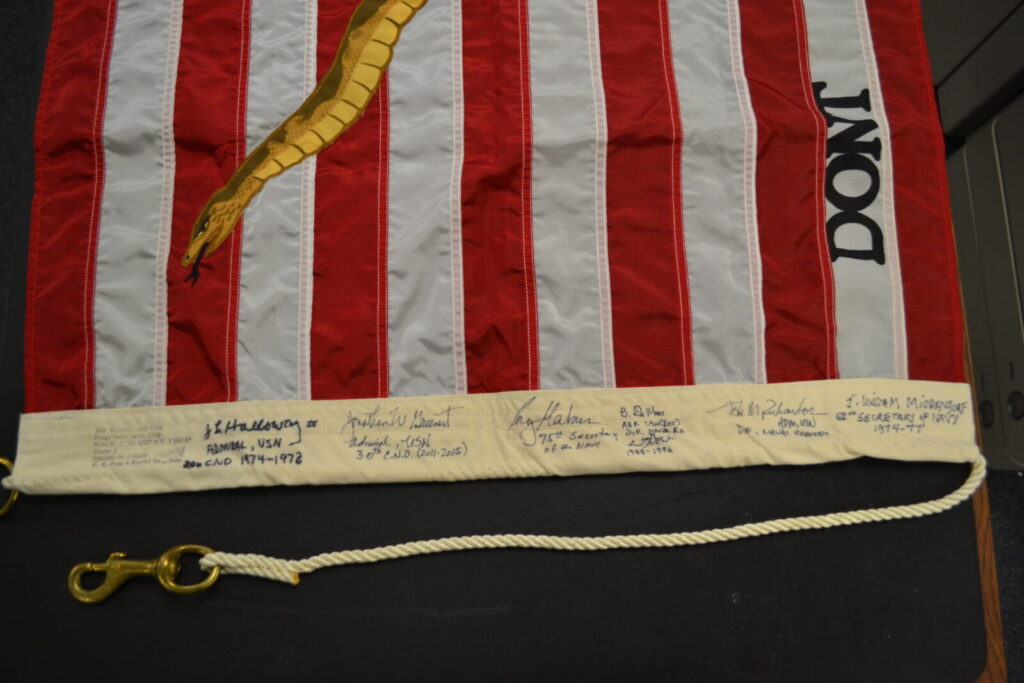 The Navy Jack presented to Senator Warner to sign was undoubtedly unique. Warner’s signature was the last of a series of signatures by individuals whose connection to the Navy was either current or directly related to Warner’s time as SECNAV and Virginia state Senator. From (L) to (R), the signatures are as follows:

After the Senator’s signature, the flag was turned over to Commander D.B. Caldwell, Commanding Officer of USS John Warner, to be hoisted at the bow of SSN 785 during the commissioning ceremony the following day.

The Saturday commissioning ceremony was hot and humid. Thousands of friends, family, and general public braved the heat to witness Senator Warner’s namesake proceed “on a mission to defend freedom.”

Some speakers took time to reflect on the former Senator’s time in the US Senate, while others highlighted his short but influential time in the military. The keynote speaker, current CNO Admiral Jonathan Greenert, praised the Navy’s newest piece of advanced weaponry, calling her “the latest incarnation of American sea power” and a “strategic asset for this country.” Warner himself wanted to be brief, but managed to wax philosophical to the crew of the ship, giving them a stern command for such a vessel that bears his name:

“Defend the sea lanes of the world which are the very arteries of international commerce. Manned by our submarines, our surface ships, and naval aircraft, we are carefully working to keep those sea lanes open – not just for us but for all.”

Just before the ship was customarily “brought to life” by the ship’s sponsor, the signed Jack was hoisted on the bow of the vessel for the excited crowd to view, as the ship was formally placed in commission by the CNO.

USS John Warner will join Submarine Squadron 6 (COMSUBRON Six) with other Virginia-class submarines and Los Angeles-class submarines. The submarine was delivered both under budget and ahead of schedule. It’s homeport will be in Norfolk, VA.

Fair Winds and Following Seas on your missions.