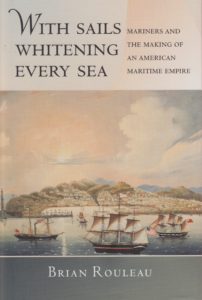 Reviewed by Andrew C. A. Jampoler

In early June 1867 Samuel Clemens, together with some sixty-five other passengers, sailed in SS Quaker City (late USS Quaker City, during 1861-65 the paddle wheel steamer had participated in the Union’s blockade of the Confederacy) from New York City.  Their immediate destination was the Azores, the first stop on a months’ long luxury cruise to the Mediterranean and Black Seas that Clemens’ alter ego, Mark Twain, soon made famous in his best-selling book, The Innocents Abroad.  First published in 1869, the book has never since been out of print.

Quaker City’s cruise, as it turns out, was interesting for another reason. In With Sails Whitening Every Sea, Brian Rouleau tells us that it was the first time in history that American tourists abroad outnumbered American seamen afloat or in port in distant places. Until the 1870s, merchant sailors represented the young United States abroad much more than did the young republic’s tiny diplomatic establishment or handful of deployed navy ships.

Through their letters and reports, sailors interpreted foreign people, places, and events to friends and family at home, and (for good or ill, largely ill in Rouleau’s description) by their actions and behavior abroad, they fixed an impression of the United States in the minds of citizens of the distant places of the world. Moreover, ships’ crews constituted much of an informal, global waterfront economy that saw local products, produce, and women exchanged in port for whatever trade goods underpaid sailors managed to collect from their sea chests or filch from their ships.

As Rouleau writes, merchant sailors, whalers, sealers, and navy men were the agents of manifest destiny at sea, a neglected maritime parallel to the great thrust on horseback, in wagons, and eventually by rail across the American continent (all the while dispossessing natives and seizing open space) that was the essence of nineteenth century American history. Not until late in the century did diplomats and other landsmen manage to wrest a place at center stage in American foreign relations—a transition accelerated by the shrinking American merchant marine and the collapse of the whaling industry.

These observations in the background, Rouleau (A junior faculty member in Texas A&M’s history department; this book was his Ph.D. dissertation at the University of Pennsylvania five years ago) uses a half-dozen short chapters “to incorporate oceanic encounters into our understanding of the experience of manifest destiny in the nineteenth century,” focusing attention on the forecastle sailor and away from ships’ officers and supercargoes, who generally enjoy pride of place in maritime history.

Each of Rouleau’s chapters reads almost as a stand-alone essay (two have been), illuminating an aspect of the history without much of the connective tissue between one and another that would make for easy reading.  Still, what he has to say is always interesting and occasionally fascinating (who knew that U.S. Navy crews staged minstrel shows on ships in Tokyo Bay for the entertainment of their presumably uncomprehending Japanese hosts).

Rouleau is no romantic. What emerges from his scholarly inspection of sailors’ life at sea and liberty ashore in the nineteenth century, and the prejudices they carried with them isn’t pretty. It is, however, well-sourced and persuasive.  As his extensive notes reveal, Rouleau’s scholarship is thorough, drawing on memoirs, newspapers and periodicals, journals, government records and files,  and private and official correspondence.

With Sails Whitening Every Sea is an unusual, insightful blend of social and maritime history.  I recommend it enthusiastically to anyone interested in either.