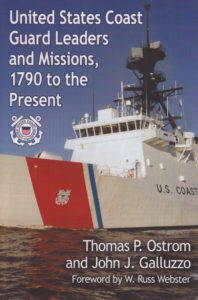 The authors start the book with a history of how the four services that to form the Coast Guard evolved administratively from their founding until their merger into the U.S. Coast Guard. Within the book, we meet the heads of these services and learn the challenges that faced them in carrying out their congressionally mandated mission. The heart and soul of the book, however, centers on the Coast Guard. The administrative history of the Coast Guard is divided into ten chapters with each chapter centering on a change in Coast Guard mission requirements. We thus have chapters on World War I, World War II, Vietnam, Rum Running, Homeland Security, Natural Disasters, and Indication.

Within each chapter, we meet the then Commandant of the Coast Guard. The authors provide a short biographical sketch for each Commandant and then explain the challenges they faced. The authors do a nice job of explaining the trials and tribulations that the Coast Guard has experienced over the years and some of the problems this has created. Due to text space limitations, the authors ignore many of the hard decisions that the Coast Guard had to make over the years, due to inadequate funding, as to which missions it should emphasis and which missions had to do more work with fewer resources.

Overall, the authors have produced a wonderful introductory look at the Coast Guard in the last half of the 20th century and the first decade of the 21st century. The Coast Guard remains the smallest of the United States armed services, but its mission emphasis since the end of World War II has grown from just operations on the United States inland waterways and the coastal waters to conducting maritime missions worldwide. Whereas in 1950 Coast Guard operations revolved around enforcing maritime safety regulations, conducting search and rescue operations, and undertaking custom regulation enforcement in U.S. waters, these traditional missions in 2015 are but a small part of the Coast Guard charter.

While much has been written about the transformation of the U.S. Defense Department and its four component armed services since World War II, little has been written about how the Coast Guard has adjustment to today’s world.  The authors lay the ground work for a graduate student to build a penetrating study of the administrative evolution of U.S. Coast Guard from its 1915 founding to 2015. This book is a great introduction into the lives of the men who have shaped today’s U.S. Coast Guard.