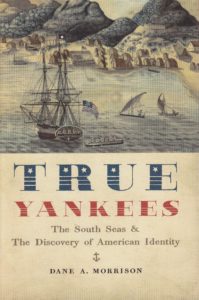 Reviewed by Michael A. Verney

In True Yankees, Morrison chronicles how voyages in the old China trade and across the Indian and Pacific Oceans between 1783 and 1844 helped define what it meant to be an American, and clarified the nation’s hierarchical relationship with other peoples.  On the stage of the South Seas and especially in the streets and roadsteads of southern China, Americans encountered two sets of “others” against whom they could fashion a sense of self: first the expatriate European mercantile community in Canton and Whampoa, and secondly “barbaric” Chinese, South Asian, Indonesian, and Oceanian natives (p. xviii).  Of the two, roving Americans viewed the former as the most important, for only they had the power to admit the United States into the ranks of civilized nations (pp. 13-14).

Morrison divides his story into two parts, one for the first generation of national Americans who voyaged in the South Seas, and another for the second.  Each chapter uses a particular character to illustrate the mechanics of and key evolutions in national identity and maturity.  Morrison’s historical actors were middle-class private citizens engaged in or otherwise related to the business of foreign commerce. They travelled widely across the globe in the early republic, and they left behind rich records of their overseas activities and impressions, whether in published accounts of their voyages or in journals and diaries that were meant to be shared with fellow mariners, friends, and family (pp. 66 and 77-78).  A prolific public press and national print culture allowed all Americans live through their sea-going careers vicariously (p. xiii).  Morrison claims that his characters’ status as ordinary people makes them more exemplary than famous figures like Commodore David Porter of the War of 1812 or Lieutenant Charles Wilkes of the United States Exploring Expedition of 1838-1842.  Nevertheless, Morrison includes both of these characters briefly in several short interludes as examples of seismic shifts in how Americans interacted with the world (pp. xv-xvii).

Despite the similarities between Morrison’s characters, the milieu and outlook of each generation were starkly different.  The book’s historical actors in Part I, including China-trade pioneer Samuel Shaw and the sealers-turned-explorers Amasa Delano and Edmund Fanning, developed a national identity that was humble, cosmopolitan, tolerant, and inquisitive.  They were also highly self-conscious, constantly on the lookout for signals that Europeans on the global stage would give them the same gestures of respect that Europeans expected of each other (pp. 13-14).  Lastly, these characters were as ambitious for themselves as for their country, aspiring to economic competency and even gentility.  Delano and Fanning, in particular, saw themselves as Yankee versions of more famous and aristocratic European explorers, including James Cook and Louis Antoine de Bougainville (pp. 91, 107, and 109).  The establishment of the American China trade under Shaw in 1784-1785 and the private explorations of Delano and Fanning in the South Seas, Morrison argues, helped the United States gain admission into the community of civilized and commercial nations and craft a unique American identity.

Morrison’s second generation of “true Yankees” contrasts sharply with his first.  Part II of the book examines the overseas careers of Harriet Low, a young woman from Salem who accompanied her uncle and aunt for a commercial residence in Canton, and Robert Bennett Forbes, a Yankee China trader of the 1820s and 1830s who witnessed the coming of the First Opium War from the “golden ghetto” of the Western merchants’ community at Canton.  Both individuals typified larger evolutions in the American sense of self and the place of the United States in world affairs.  If the first generation celebrated tolerance and Enlightenment humanism and had helped lead the country into the ranks of civilized nations through a prosperous East Indies trade, the second generation rested on their predecessor’s laurels with confident arrogance (pp. 194-195).  As citizens of a country now recognized by Europeans as a civilized nation, Low and Forbes indulged in racist views of indigenes in China and the South Seas (pp. 151-152).  They especially denigrated those natives who resisted or put obstacles in the way of liberal commercial principles, as they accused the Chinese of doing in the lead-up to the Opium War.  This period is an especially important illustrative moment for Morrison because of the Anglo-American cooperation against the common enemy of Qing China, which both Britons and Americans viewed as barbarous, tyrannical, and anti-modern (pp. 209-210).  Like John Quincy Adams, they cheered as British forces chastised an upstart people and re-established white Euroamerican commercial hegemony in the East Indies and South China Seas.

True Yankees is an insightful, well-documented, and immensely significant work for the field of early American history.  Morrison challenges an old historiographical tradition going back to Frederick Jackson Turner and beyond that the experience of the continental frontier made for a unique American identity.  In contrast, Morrison contends that the “fundamental American experience during the formative years of the new nation was lived on the waters that led to China, India, and Java” (p. xviii).  He portrays the early United States as Janus-faced, looking both to the “Eastern frontier” of the world’s oceans and to the terrestrial and riparian West (p. 109).  He argues that Americans paid at least as much attention (if not more) to the former as to the latter in the early Republic (p. xvii).  After all, it was largely at sea and in the globe’s great trading emporiums that the novel republic’s independence and legitimacy could be tested.  The oceanic sphere was also a stage on which Americans could interact with European and global peoples and so nourish a sense of themselves as a sovereign and distinct people.

Morrison’s study has other laudable features as well.  The author’s frequent parallels between the oceanic and terrestrial experiences of American expansionism are helpful in illuminating a larger context.  These additions remind readers that, in D. W. Meinig’s words, the story of American expansion is not simply of a “westward movement by a government and people across the continent,” but of a “powerful outward movement, putting pressure on the borderlands to the north and south as well as thrusting westward, and ranging out to sea to place islands and coastlands near and far under American commercial, cultural, demographic, and political influence.”  In addition, Morrison’s generational approach is highly useful, demonstrating how quickly the openness of the Revolutionary generation devolved into the superciliousness of the Jacksonians.  True Yankees demonstrates that the repercussions of the transition from enlightened republicanism to xenophobic liberalism can be traced as far away as the factories of Canton and the islands of the South Pacific.

This reviewer’s only regret is that the author did not include a third character in Part II, preferably someone who visited the same South Seas locales as Delano and Fanning.  This would have extended his analysis of the second generation of Americans beyond China and would have balanced both parts of the book.  This wish aside, True Yankees is an excellent and highly important study.  Most of all, Morrison shows that although the United States had indeed become a full partner in community of civilized nations by the signing of the Treaty of Wangxi in 1844, it was not the country that men like Shaw, Delano, and Fanning had hoped to build.

Michael Verney is a doctoral student in the History Department at the University of New Hampshire.  His dissertation, ‘“Our Field of Fame’: Naval Exploration and Empire in the Early American Republic, 1815-1860,” examines the global exploring expeditions dispatched by the U.S. Navy before the Civil War.