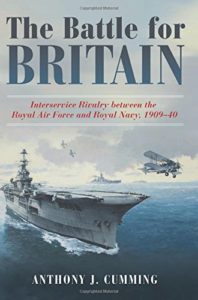 Subtitled Interservice Rivalry between the Royal Air Force and the Royal Navy, 1909-1940, Cumming takes up the cudgel he previously wielded in The Royal Navy and the Battle of Britain to beat Air Marshall Hugh “Boom” Trenchard and his successors smartly about the head and shoulders. Though Trenchard had been retired for almost ten years before the beginning of World War II, his dedication to Douhet’s vision of aerial bombardment as the future of warfare left the Royal Air Force philosophically dedicated to strategic bombing and woefully unprepared to defend the British Isles against the Luftwaffe or to support the ground forces in Europe or the Libyan desert.

The actual political conflicts between the Royal Air Force and the Royal Navy are not very well described. Much of what is known in the American press as “interservice bickering” is left unexplained. But relating how a dedicated idealist can maneuver the political processes and manipulate public opinion through deft and repeated publicity to create an organization to meet his perceptions is very clear. Trenchard dedicated whatever resources he could obtain, money, time, personnel and installations, toward a single end – and air force dedicated to the bomber offensive. Only the direct intervention of civilian leadership at the Air Ministry saved the Fighter Command of the RAF. The tug between the RN and the RAF for control of aircraft at sea is too little covered for those interested in the political scramble for control of the air. How the Naval Air Service succumbed to RAF control is not described nor is its resurrection as the Fleet Air Arm. And the fight between RAF leaders and the Navy over the size and employment of the Coastal Command is unfortunately ignored.

The book describes the inter-war period operations of aircraft interdiction to maintain order in the Middle East areas in some detail. There is not much discussion of the RAF’s persistent allegations that airplanes doomed ships; Trenchard’s proposition on defending Singapore using bombers alone is not mentioned. But Cumming brings the training of pilots under close scrutiny. Noting that bomber pilots needed only to fly straight and level while pilot training in general aimed at air shows- both resulting in no advance in tactics and leading to erroneous formations on land and in the sky. Slogans versus analysis were the stuff of the uniformed leadership though the courage of the individual pilots and the skills of the civilian aircraft industry are subjects of repeated praise. Notable was the markedly superior performance of the Czech and Polish fighter pilots in the air war of 1940-1942: several times superior to those of the RAF.

The book ends with a succinct description of the naval war in the Mediterranean in 1940 – 1941. Cumming is generous in his descriptions of the Fairey Swordfish. Ungainly, slow, a biplane covered mostly in fabric, these aircraft were armed with a torpedo that worked – even in the shallow water of a harbor. The resulting victory at Taranto (three battleships on the bottom) did not permanently cripple the Italian Fleet but the technique for modifying the torpedo with wooden fins and a nose lanyard to keep it from diving would be used by the Japanese with deadly effect at Pearl Harbor. This chapter covers a sea war little noticed in most histories. For those who mistake the Italian Navy’s abilities with Mussolini’s posturing can gain an appreciation of how both sides carried on in the face of difficulties. The stranding of otherwise powerful ships of the Regia Marina for want of fuel is a stark lesson in the importance of logistics. The book is worth reading for these last two chapters alone.

Rear Admiral Holland is a director on the board of the Naval Historical Foundation.