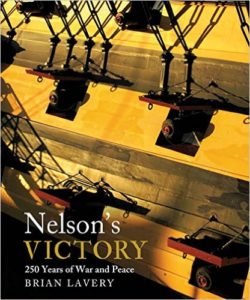 Dozens of books have been written about HMS Victory. Why another one? Nelson’s Victory: 250 Years of War and Peace, by Brian Lavery, offers two very good reasons. The first is the author. If any historian could be described as the dean of British sailing-era writers, Brian Lavery is a chief contender.

The second?  This year marks the 250th anniversary of Victory’s launching. A ship marking its quarter-millennium, even a scow, deserves some attention. But Victory is distinguished for achievements other than age. It represented an apogee in the development of the first-rate ship of the line, and had a distinguished history, even prior to Trafalgar. That history is frequently neglected. Most books on Victory focus on the few months of its career when it served as Horatio Nelson’s flagship during the Trafalgar Campaign, as does much artwork depicting Victory, and virtually all of the models.

Trafalgar plays a role in Nelson’s Victory, but forms only a part of Lavery’s story. Lavery follows the entire career of Victory, from the point its construction was authorized to the present. He places its story in the context of the times in which it existed. From 1765 through 1805, Lavery alternates between Victory and Nelson, following the careers of each until they merge at Trafalgar. This provides the background for the period in which the ship-of-the-line dominated the seas.

While Lavery spend half the book on the events leading up to Trafalgar, and perhaps twenty-five pages on the battle itself, a third of the book is devoted to Victory’s post-Trafalgar career. This includes the remaining ten years of the Napoleonic Wars where Victory served as flagship in the Baltic. He also spends time on Victory’s history over the two centuries after Waterloo.

The result is a fascinating history of naval architecture during the age of the wooden warship.

Early chapters reveal the different faces of Victory during the Wars of American Revolution and the Wars of French Revolution, from 1770 to 1800. As Lavery shows, the ship looked much different prior to the great repair of 1800-1803 that gave Victory its Trafalgar appearance.

Lavery also traces Victory’s changes in appearance following Trafalgar. Victory, then still a major unit of the Royal Navy, was given a Seppings round bow in 1814, dramatically altering its appearance, an appearance it maintained over a century. Lavery presents the ship’s gradual transformation from a fighting warship to a ceremonial vessel and museum ship during the nineteenth century.

Nelson’s Victory is filled with color illustrations, many from the period. These highlight both the appearance of the ship and the times in which it sailed. Model-makers will find the illustrations useful, and may even be inspired to build a version of Victory outside its Trafalgar period. Wargamers will find the book only marginally useful, but an interesting overview. Nelson’s Victory is an excellent general history of the ship, one those interested in the period will find interesting.