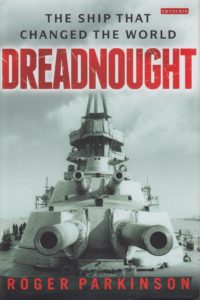 HMS Dreadnought and the history of the all big gun battleships and battlecruisers that became known collectively as dreadnoughts is a subject that has been addressed from several aspects. In works on the design and characteristics of battleships (and battlecruisers), such as R. A. Burt’s British Battleships of World War One, HMS Dreadnought and dreadnoughts are discussed primarily from what may be termed a “technical” aspect, with emphasis on technological developments and their impact on battleship design and characteristics. In works dealing with the historical origins of World War I, such as Robert K. Massie’s work, also titled Dreadnought, HMS Dreadnought and dreadnoughts are discussed primarily from the aspect of their political impact and effect on international relations, with emphasis on the Anglo-German naval arms race.

In his preface, author Roger Parkinson states: “Any contemporary analysis, especially one at the centenary of the outbreak of World War I, requires a range and depth not often attempted before.”  In Dreadnought: The Ship That Changed the World, HMS Dreadnought and dreadnoughts are historically analyzed from multiple aspects, including technical, political and international relations, national policy and especially naval policy aspects, to produce a comprehensive, multifaceted evaluation of their origin, characteristics, and impact on world history. Concentrating on a longer period than most other analyses (from 1889 to 1922), the time frame of this analysis is also expanded in some areas to include the period from the advent of ironclads or even the age of sail. Additionally, although the book is necessarily centered on the United Kingdom and the British Navy and their rivals Germany and the Kaiserliche Marine, other European and non-European navies that built dreadnoughts receive significant coverage.

Naval policy is the central focus of the historical analysis of the political, national policy, and international relations aspects of HMS Dreadnought and dreadnoughts that forms the largest portion of the book. British naval policy is necessarily central and its evolution is first traced from the unwritten conventions dating from the age of sail to the parliamentary legislation of the Naval Defense Act of 1889. The role of technical developments, reforms, etc in the evolution of British naval policy up to and during World War I and the development of war plans, culminating in the concept of distant blockade, are examined, with particular reference to dreadnoughts. The dominant role that naval policy came to play in national policy (termed “navalism”) in Britain and in other nations is linked to the historical impact of the dreadnoughts. Similarly, the development of the German Navy is traced from a small coast defence force as part of the German Army to the world’s second most powerful navy at the onset of World War I. Again, naval policy became codified by legislation in the German Naval Laws of 1898 and 1900.

International developments, with shifting alliances and the rise of Germany from naval insignificance to Britain’s primary naval rival and, ultimately, adversary, are seen through their impact on naval policy in the dreadnought (and pre-dreadnought) era. The naval policy of other nations possessing significant navies is also discussed, though in less detail. A later chapter describes the worldwide dreadnought arms race that gripped navies and nations within and beyond Europe in “dreadnought mania” that came to determine naval and national policies to an extraordinary degree.

The leading role played by the colorful and controversial “Jackie” Fisher in both the creation of Dreadnought and in the British Navy and British naval policy of the era is extensively discussed. Fisher’s ideas and policies and those of his opponents and critics are examined, particularly as regards dreadnoughts and naval policy and war plans. This discussion reveals a level of interplay between serving naval officers, politics, society and the press that often had a remarkable impact on the British Navy and naval policy.

The key role of Tirpitz and Kaiser Wilhelm II in the development of German naval policy, the Kaiserliche Marine and German dreadnoughts is similarly discussed. Again, the remarkable influence of these two personalities and their relationships with politics and the press is revealed.

The final two chapters provide a brief naval history of World War I up to Jutland and from Jutland to the Washington Naval Treaty. The role of British and German dreadnoughts is examined and the dreadnought is evaluated as a weapons system, including as a strategic weapon and deterrent. The book closes with a short discussion of the Washington Naval Treaty and its origins. The most likely areas for further discussion and potential controversy are found in the analyses and conclusions in these chapters.

The book is extensively footnoted, with a comprehensive bibliography. A minor criticism is the small size of the figures based on Brassey’s Naval Annual. The only minor error noted is that the four British battleships planned in 1921 were designed for 18-inch guns, rather than the stated 16-inch guns (these were planned for the four 1921 battlecruisers).

While this book is not recommended for the reader seeking a swashbuckling tale that reads like a novel (the style is academic and may be found rather dry by some), Roger Parkinson succeeds admirably in achieving a comprehensive multifaceted academic historical analysis of Dreadnought and dreadnoughts for the period up to 1922. For those wanting a historical analysis that goes beyond most others in its breadth and depth, particularly with regard to naval policy, Parkinson’s Dreadnought can be highly recommended.

Dr. Scholes is a member of the Naval Historical Foundation.