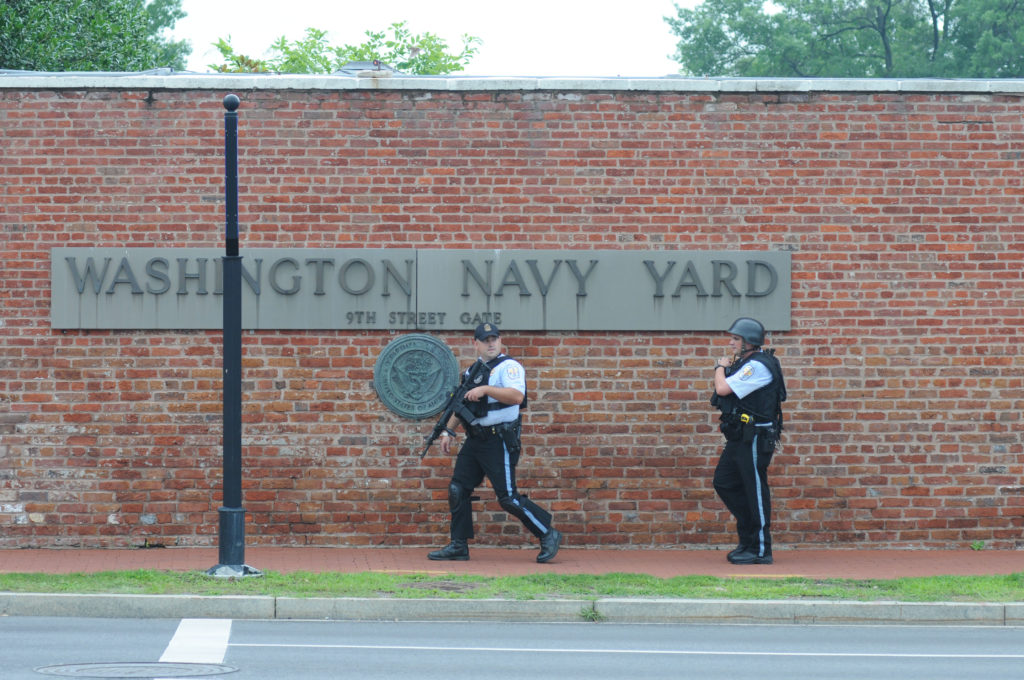 It was an early morning for me. Since the NHF moved into its temporary office location near the 11th and O St. entrance at the Washington Navy Yard, things had been quiet. The calm serenity of cubicle life seemed to fit me. Early mornings were for catching up with emails and writing copy on a number of blog stories I had in the backburner. I knew the day would be extra quiet, as it was the last day of work before the 4th of July holiday weekend. As a former government employee, I can attest to the idea that the day before a three-day weekend often stretched to four if possible.

As I sipped my coffee and mulled over some work items, I heard three dings on my cell phone in rapid succession. The time was 7:36am. It seemed a little early for a text message. With my wife on her way to work on the metro at that time, I highly doubted she needed me for anything. I looked over to my phone and saw it was a mass text email from the Navy. Odd. The first text messages received were almost cryptic. I learned from my experience going through several bad relationships that an all caps text message is never good:

I walked over to Dr. Winkler, the only other NHF staff member yesterday morning, and inquired about the message. “It might be something with the weather,” he said to me. With all of the spontaneous thunderstorms in the area over the past week, the situation seemed likely. Then we started to hear the sirens. We looked at each other worryingly. We both looked our email inbox and saw what we feared. We were in a lockdown.

More sirens. Then came more text messages, several of which came from colleagues across the base asking if this was in fact real.

By the time I answered a few of them, Dave and I heard a knock on the door. A sailor from the NHHC front office upstairs directed us to the second floor where the rest of the buildings employees were located for the remainder of the situation. We dropped what we were doing and headed upstairs. At this point it all seemed real. We dropped what we were doing and joined the rest of the pre-holiday holdouts inside the Naval History and Heritage Command front office.

With so many people attempting to notify loved ones, cell phone coverage was spotty at best inside the room. I took a second to look around at the faces of the men and women crammed inside the office space with us. Some exhibited worry, while others showed the kind of calm resolved I attempted to paint on my face. After I reached my wife and family, I took to my phone to get some news. We all did. I overheard a lot of talk about the “last time this happened,” as there were several veterans of the 2013 incident. Eventually, the news started drifting in. The reports did not good. We could not see anything from our tiny building in the corner of the yard. The only thing that gave us any indication that we were in a serious situation was the sound of sirens and helicopters flying overhead. The sirens were constant.

News agencies began taking to social media. Reports were frequent, all of which had something different to say about the situation. The conversations that began when we first assembled slowly died off. We were not in prayer. We were all looking at our phones. We were looking for information. As the Digital Content Developer of the Foundation, I knew it would be best to monitor the situation as best as I could. Anything to occupy my mind was better than sitting there doing nothing.

At first there were reports of an active gunman. Nothing confirmed.

Then there were reports of TWO gunmen inside the building. Nothing confirmed.

I receive a text message around 8:30am of a confirmed shooter. Confirmed. Unconfirmed. Anxiety. Frustration.

My fingers moved as fast as they could. The reports spread around the Internet reminded me of the fragile nature of social media and its power to inform and misinform the masses, whether it be intentional or not.

We stretched into the third hour of the lockdown. Roads were closed. We managed to stream CNN and saw M Street completely blocked with law enforcement and homeland security vehicles. Nothing confirmed still. Reports of confirmations an hour ago were now recanted. What was happening on the other side of the base? I sat there baffled. Which was it? Confirmed or unconfirmed. Were there two shooters or one? Was this all a false alarm? Two hours into the lockdown, nothing was firm as far as news information was concerned. The only thing we could rely on was that we were safe and secure inside our building. We only hope that courtesy was extended to everyone else at the Navy Yard.

I sat on a step leading up to a landing of cubicles in their front office and began to think about the situation I was in. All the page refreshing and texting took a toll on my slowly draining cell phone battery. Unfortunately, nobody in the room had a power cord for my phone model and my own was back downstairs in no man’s land. Either way, it was a good time to reflect.

This was the first time that I could literally see myself in headline news. I was there in the middle of it, albeit the very edge of the Washington Navy Yard. But I was there. It WAS happening. Certainly this scenario ran through my head almost two years ago when I came to interview for the position at the Foundation. I never thought it could happen again. I sat there on that step and thought about the times in the Navy’s history where these events had occurred. What if there were text message alerts to the men and women stationed at Pearl Harbor on the morning of December 7th?   It’s easy to pontificate in today’s information age. History is what it was for its time period, plain and simple. I continued to occupy my mind 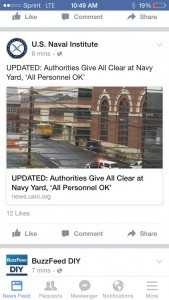 Eventually, it seemed that all the news outlets were singing the same tune. False Alarm. We all breathed a collective sigh of relief. Around 11:00, several of the surrounding buildings to ours began to release employees. Two NHHC employees who were locked inside the Dunkin Donuts across 11th street from us came in bearing gifts. I gratefully munched on my donut and waited patiently to go back to my office.

We received the official all clear at 12:03pm. In a time frame of four and a half hours, local police and law enforcement assessed and managed a potentially fatal situation. As it was, it all seemed a big misunderstanding. According to the official report, a call was placed at 7:29am for the possible sound of a gunshot near NAVSEA’s Building 197, the scene of the 2013 tragic shooting. After several hours of thorough searching, no evidence of a shooting or injured individuals were discovered. The only complications to the investigations were the reports of the Associated Press of two individuals jumping the fence of the Navy Yard around 9:20am. As DC Police Chief Cathy Lanier stated in the press conference, the various law enforcement agencies were “very well-prepared” for the situation. WNY employees are lucky to have avoided another situation, but are equally lucky to have such a well-prepared and effective force at the ready to protect us. The first responders and sailors who took control yesterday morning truly exemplify honor, courage, and commitment. BZ to you all.

Special thanks to the men and women of the Naval History and Heritage Command who hunkered down with Dave and I for a few hours on a Thursday morning, and for their sailors who took to protocol immediately.