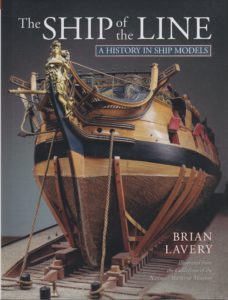 This slim, nicely illustrated volume by Brian Lavery, Curator Emeritus of the U.K.’s National Maritime Museum in Greenwich, and one of the world’s most respected naval historians, describes the evolution of the ship of the line in the age of sail.

Since this epoch of naval history is not second nature to most (a sin in the eyes of this reviewer), some explanation is probably in order.

War at sea is as old as human kind. Ancient societies with access to oceans competed for control of maritime trade routes and developed warships to gain and maintain that control. The Battle of Salamis, fought in the 5th century BCE near Athens between the Greek city states and the Persian Empire was the largest naval engagement ever fought in terms of lives lost. Both sides used a type of galley known as triremes, long, narrow-beamed vessels with tiers or oarsmen who rowed in unison to propel the ship, equipped with a ram on the prow, into the enemy. Crewmen on the trireme’s main deck fought like infantry once in contact with enemy vessels. Large fleets of opposing ships fought in melees.

This mode of fighting continued for two millennia. The last major battle fought between rowed galleys was in 1571 at Lepanto, just 100 miles from Salamis in the Gulf of Corninth. Fought between the Holy League and the Ottoman Empire, the battle involved cannon fire as well as small arms and larger ships, known as galleasses, that carried cannons mounted broadside as well as fore and aft. Improvements in casting technology and material greatly improved cannon reliability and enabled far larger and heavier weapons, signaling the galley’s demise as a viable combat platform.

English warship development reflected the Mediterranean approach. In addition to galleys, other English naval vessels often were converted cogs, broad-beamed and flat-bottomed, with a single mast and square-rigged sail used for maritime transport. They carried troops across the Channel during the 100 Years War and added cannons in the 15th century. By the early 16th century, the advent of the gun port ended the restriction of cannons mounted fore and aft, and larger warships, capable of carrying dozens of guns and propelled by square-rigged sails on multiple masts, came to the fore. The Mary Rose, raised from the Solent near Portsmouth and on display in that city’s Historical Dockyards, carried about 90 guns at the time of her sinking in 1545.

Even with guns installed broadside, however, the battle line tactic, with ships sailing in line ahead and firing guns in sequence at an enemy fleet, frequently at ranges of a quarter mile or less, would not be codified in formal fighting instructions until the mid-17th century during the Anglo-Dutch Wars. Thereafter, the Royal Navy adhered so stringently to the battle line that Vice Admiral John Byng was executed by firing squad in 1757 for failing to direct his fleet to close successfully with the French off Minorca. With improvements in signals (transmitted by flag hoists), commanders gained flexibility in fleet disposition and officers, Horatio Nelson most notably, won major victories by departing from the line of battle tactic and taking full advantage of individual circumstances during engagements.

Ship models, the real focus of Lavery’s book, were indispensable tools in the development of naval architecture from the 16th through the early 19th centuries. They served two important purposes; as ship design and planning became more sophisticated, models assisted shipwrights in the manufacturing process in government and commercial dockyards, both of which produced naval ships. In addition, models helped members of Parliament, who often were reluctant to provide funding for ship orders known as Establishments over the years, to understand what their appropriations were purchasing and how more advanced hull designs improved maneuverability and fighting capabilities.

These requirements resulted in extraordinarily detailed – and beautiful – models, many of which, known as “Navy Board” models deliberately omitted planking so observers could study the structures of hulls. Other models were constructed from solid blocks of wood or fully planked over accurately rendered frames. In some cases, combinations of these techniques are utilized.

The book feature a number of full-color photos of the models Lavery’s history describes. Many of the early models remained property of the Royal Family or the Admiralty, and nearly all of these are now on display in museums and libraries around the U.K. In one case, however, a wealthy American railroad executive, Henry Huddleston Rogers, purchased a large private collection owned by Charles Sergison, a naval administrator who served the Royal Navy in the late 17th and early 18th centuries, a generation after Samuel Pepys. That collection, with many other models, now resides in the U.S. Naval Academy Museum in Annapolis. The museum completed a major renovation in 2009, and is open to the public.

Although it’s a bit pricey, The Ship of the Line will please anyone interested in the history of classic warships.