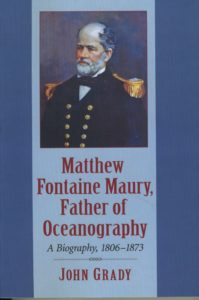 While Matthew Fontaine Maury is without a doubt well known among historians of science and in particular historians of oceanography, the general public might not know his name. Many naval historians will not have a real idea about the man who is often credited as the “Father of Oceanography.” John Grady’s new biography of Maury not only helps provide Maury with well-deserved recognition as a leading oceanographer of the 19th century and an American and Confederate naval officer, but also as a publicist and advocate for the Confederate cause. He is the man behind the idea to re-settle the slaves of the South to the Brazilian Amazon region. He was also a private person who experienced a number of ups and downs throughout his life.

With most facts about Maury’s life already included in earlier biographies, notably those published in the 1960s, Grady’s main achievement is not so much unearthing new details about Maury, but combining existing details into a coherent story. Maury followed his scientific and professional visions and ideas throughout his whole life despite of a number of substantial setbacks, obstacles and disappointments. He also used the media in a way easily comparable to today’s blogging and use of social media. In doing so, Grady helps today’s readers understand that scientists of the 19th century could be equally interested in influencing the public opinion as some scientists of today, regardless if you agree with the idea of a scientist as a public advocate for certain political causes. While some of Maury’s ideas might seem today up to a certain degree bizarre, like for example his idea of re-settling slaves to the Amazon, Grady puts them into a contemporary context and more importantly, tells the story that these ideas never distracted Maury from his main idea to combine the knowledge of all seafarers into a body of knowledge on oceanographic topics available to all seafarers, or to use modern terminology to develop a method of crowd-sourced oceanography. Besides these achievements, Grady successfully manages to bring a historical person again to life with his book never becoming a dry scholarly read, but always remaining a book that has all the qualities of a good read. It is a book you would also read for its qualities as a well-written story even if you might not be interested in the history of oceanography.

The substantial bibliography included in Grady’s book does not only easily demonstrate that the book is based on solid research and knowledge of the wider historical framework, but is also a most helpful tool for anybody interested in naval history and/or history of oceanography during the 19th century. You might have wished for some more illustrations, in particular of the various charts produced by Maury over his whole career, reproductions of his scientific works, etc. Given the fact that the book is available for a reasonable price, this does not limit the positive impression of the book at all. Providing an index would have substantially improved the quality and usability of the book as a scholarly publication.

In the end, Grady’s new biography on Matthew Fontaine Maury, one of the most important marine scientists of the 19th century, needs to be recommended to all readers either interested in the history of science, the nexus between the navy and oceanographic research, or even only the maritime aspects of the Civil War.

Without any doubt, Grady needs to be credited for bringing one of the most interesting naval officers of the 19th century back to center-stage and for writing a book that is simply an enjoyable read.