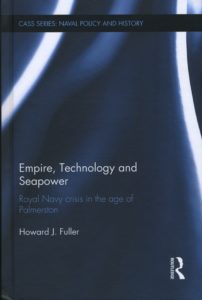 Howard Fuller’s work here has insights for naval thinkers and strategists today. It is a clearly revisionist work and he occasionally overstates his case particularly in the first “part” of the book. There are four parts encompassing an impressive thirty chapters plus a conclusion and introduction. However, it is a case that needs overstating, as Howard demonstrates.

In short, he challenges the idea of a confident Pax Britannica in the 19th Century based on British dominance at sea. Instead he posits, through the personality of the British politician Lord Palmerston, a façade of sea power covering over a kind of strategic angst, deeply felt and ingrained in the policies of the period. To some degree he is building, unintentionally perhaps, on the earlier three volume maritime meta-history of Peter Padfield that peeled back multiple layers to expose a far more complicated narrative of the relationship between maritime power, representative democracy, and the rise of market capitalism. Howard quotes fellow naval historian Jan Ruger to capture this relationship in his conclusions:

There is a curious relationship between the rise of this public stage and the decline of strategic influence and power. The weaker one’s own position seemed, the more intensive did the muscle-flexing, the projecting of empire and power, become. (246)

It is no accident that Fuller intends his readers (in English) to apply the object lesson provided by this book to the current American foreign and defense policy behaviors.

Fuller breaks his overall argument into four parts, thematic rather than chronological.   The first part consists of eight short, hard-hitting chapters that challenge both the efficacy, and the narrative of the efficacy, of the Royal Navy (RN) and Palmerston’s diplomacy of the period. The second part takes on the idea of the RN’s efficacy in more detail, looking at the Crimean and American Civil Wars against the back-drop of Anglo-French “balance of power.” (xi) Part III returns to the larger themes of strategy, grand strategy even, challenging Britain’s adoption of a policy of “Splendid Isolation” as something contingent rather than over-determined. (173) In Fuller’s view, was this policy decision really a matter of choice or was it a matter urgent necessity given the weakness of Britain’s position? Finally, the last part of the book consists of four short “chapters” and an equally short conclusion that returns to the idea of Britain as “paper tiger” rather than an “iron lion.” (xiii, 207) As Fuller plows through this rather cumbersome argumentative architecture, he not only challenges the notion of British Maritime Supremacy during this period (and after), but the entire notion of the efficacy of “command of the sea” itself. (249)

Returning to Part I, Fuller builds on his earlier work in Clad in Iron (2008), which one suspects led him onto the trail of what he now considers a false narrative of British Maritime triumph and confidence. In that book and here, Fuller describes the challenges faced by the RN that undermined the already shaky confidence of its leaders. He especially focuses on the up and coming commercial powerhouse of the United States, which chose an “anti-access” strategy of ironclad monitors to counter-balance the RN’s reputed superiority in its littoral waters. However, before getting to this and other “threats” that contributed to a British “uncertainty” in its sea power, he takes on the historiography of British maritime dominance in the 19th Century. His first, and most frequent, target is fellow naval historian Andrew Lambert, whom he practically accuses of historical malpractice in Part I of the book.

Again, Fuller overstates a case that needs overstating. This is because history and the collective attitudes about it are really a set of narratives, often not agreed upon, some more popular and widespread, others less in the limelight. The idea of the Pax Britannica and the rise of Britain to a secure maritime dominance is a very old and strong narrative indeed, old by modern standards, beginning with A.T. Mahan’s work in the late 19th Century. The problem as this reviewer sees it is that after the end of the Soviet-U.S. Cold War in 1989-1991 the public, such as it was interested in these matters, took a break from history, including maritime history.   When 9/11 brought history screaming back into people’s lives, maritime history remained the preserve of a special few naval historians and established narratives, when read, remained largely unchallenged in the larger public arena. However, with the rise of the People’s Republic of China this “holiday,” too, has ended. The problem is that the public, and many of the elites, have returned to the existing dominant narratives, which much new scholarship (like Fuller’s) has challenged. Fuller’s book is not so much for the public, as it is for historians and intellectuals, who must come to grip with its arguments and then go out revise what needs revising so that we may all move forward on as firm a base as possible. Fuller quotes, ironically, Andrew Lambert: “ ‘…a thorough understanding of the past is the best hope for the future.’ Exactly.” (33) Readers who wish to know why would do well to read this book.

The biggest drawback to the study is that it is a demanding read, even for a scholar.   Some scholars relish this sort of thing, but most people do not. One of my own rules states “never test the readers’ patience”—and this reviewer found both his concentration and patience tested. Part of the problem with Fuller’s approach has to do with the topic. It is a complex topic with a complex explanation. Fuller might have better “packaged” his narrative and arguments by combining some of the chapters and then providing tentative or initial conclusions, summaries and transitional language between the chapters. Too, he often uses asides to obscure events, assuming his reader is thoroughly informed of them. For example, his discussion of the capsize of the HMS Captain in 1870, (243) in his conclusions no less, was opaque to this reviewer, who had to research the event separately because of a lack of knowledge and no detailed discussion of the incident beyond its emphasis of the supporting argument that technology seemed to be leaving the Royal Navy, and thus Britain, in its wake.

That said, the applications to the United States supposed “maritime dominance” today and the strategy of the Peoples’ Liberation Army Navy of China in response make this book very relevant—but non-specialists may find the analogy too much work. Therefore, because of the book’s often dense text, I recommend this book primarily for naval historians and strategists. They will find it a challenging, but ultimately rewarding, read.

Dr. John T. Kuehn is the General William Stofft Chair for Historical Research at the U.S. Army Command and General Staff College. He retired from the U.S. Navy 2004 at the rank of commander after 23 years of service as a naval flight officer in EP-3s and ES-3s. He authored Agents of Innovation (2008), A Military History of Japan: From the Age of the Samurai to the 21st Century (2014), and co-authored Eyewitness Pacific Theater (2008) with D.M. Giangreco, and was awarded a Moncado Prize from the Society for Military History in 2011. His latest book is Napoleonic Warfare: The Operational Art of the Great Campaigns (2015, Praeger).