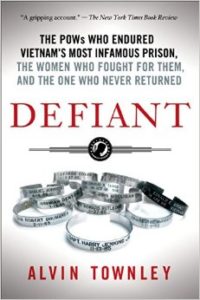 Defiant is an extremely accurate depiction of the miserable existence prisoners of the North Viet Nam (NVN) endured during the US war in Viet Nam. I know his description is accurate because I was held prisoner in NVN prison camps in and around Hanoi for almost six years, from May 1967 to March 1973. By choosing the 11 men held in the Hanoi prison camp called Alcatraz, Townley documents the worst of the worst torture and living conditions inflicted on the captured US airmen. The reader will learn about NVN short term torture methods of beatings and trussing a man up with ropes in way that pulls his joints apart but do not kill. The “Alcatraz 11” suffered many longer-term torture hardships from living conditions that defy the NVN claims of humane treatment of POWs. These men and others spent years in solitary confinement, months in leg stocks and tight hand cuffs, years in tiny cells without circulation and sunlight as well as constant harassment at quizzes (interrogations). A surprising revelation is the little known reason why American POWs were tortured. One would expect interrogation by captors to gain military information and intelligence that might aid the war effort. But that was not the case in NVN. The camp authority tortured to gain anti-war propaganda, confessions of war crimes, good treatment statements, betrayal of fellow POWs and, sometimes, just to be cruel.

Defiant provides insight into the motivational factors and resistance methods these men used to survive. Adherence to the spirit of the Code of Conduct as well as not letting your fellow POW down were constant driving forces for these men. Mutual support for each other became an attitude that permeated the NVN prisoner’s system. It was not unusual for one POW to risk torture in order to help a fellow yank. That support came in the form of having someone to say it is OK to make a confession when you can’t take the torture anymore, having someone to cry with when you feel low, having someone to make you laugh or having someone to pray with when all seems lost.

This book will give you a glimpse into the outstanding leadership demonstrated by the POW senior officers and CAG (Carrier Air Group Commander) Jim Stockdale in particular. Jim’s BACK US policy represents the best qualities of institutional values. Any CEO would be proud to have divined similar organizational rules. His BACK US acronym stood for:

Stay off the Air-avoid talking on the camp radio

Keep Communications going-support each other and resist propaganda

And Unity before Self-also connotes we represent the United States

This policy was concise, memorable, spoke volumes about our mission. The policy stated the ideal and was a practical guide for conduct while we were imprisoned. And thanks to the internal communications effort every POW knew this policy and 99% of them tried to live by CAG’s guidance.

The book paints a little understood concept of prison camps. Namely “Who is controlling the camp? Is it the prisoners or the camp authority?” This struggle is the main reason there was an Alcatraz camp. Every test the POWs faced could be reduced to this conflict. Can the camp authority control your mind and will, or are you going to resist with all your strength? I’ll let the reader decide whose resolve prevailed.

A highlight of the book is the portrayal of the plight and strength of the POW’s wives. They suffered from their husband’s separation and from some of the ill-conceived policies of the US government. My wife raised our three boys by herself from ages one, two and three until I came home when the boys were eight, nine and ten. She did not know I was alive for two and one half years until I got to write a letter in December 1969. US policy changes that brought pressure on NVN were a direct result of the wives insistence that the truth be told. My wife was part of the movement to enlist support for our cause and headed a group called Iowans Care. She gave a lot of speeches around Iowa where she lived while I was in NVN. She was part of the National League but never held national office. I am proud of her actions as a wife, mother and spokesperson for our cause. Primarily due to the public awareness program of these brave women, the American populace demanded answers. This attitude hit the NVN government where it hurt because they thought they were fighting a propaganda war. But the wives turned the tables on them. These brave women did more than stand and wait.

Alvin Townley has done a remarkable job in portraying many aspects of the POW’s situation and capturing his resolve to return with honor. He has given a well-researched look into the hearts and minds of these men and their wives. Defiant will educate the serious military history student and the curious citizen. I believe it will also be an inspiration to many.

Captain Naughton served 26 years in the Navy including three commanding officer billets (VA 83, VA174 and NAS Dallas.)  After retiring from the Navy he spent 15 years with NASA running the Aircraft Operations at Johnson Space Center.