A Swift boat veteran listens to Dr. Edward Marolda talk during their visit to the Washington Navy Yard and PCF-1 (NHF Photo)

Nearly two hundred Swift boat veterans traveled into Washington, D.C. this past Saturday to view the Swift boat on display outside on the Washington Navy Yard waterfront and tour the exhibits at the National Museum of the United States Navy. Their excursion to the Washington Navy Yard was part of the organization’s 2015 Reunion, which began on Thursday, 7 May in Tysons Corner, VA. The Swift boat on display at the Washington Navy Yard, PCF 1, is one of two patrol craft preserved as static displays in the country. The other Swift boat display is located on the Naval Special Warfare Center at Naval Amphibious Base, Coronado, California. Staff members of the Naval Historical Foundation were on hand to greet the assemblage of veterans and cover the event. Also in attendance were staff members from the U.S. Navy Memorial Foundation, who took several oral histories from willing veterans throughout the morning of the 9th.

Swift boats were first used to patrol the South Vietnamese coastline during Operation Market Time in 1965. Historians have called Swift boat sailors the “workhorses” of Task Force 115, the Coastal Surveillance Force largely responsible for the Market Time operation. This year marks the fiftieth anniversary since the beginning of that operation. Swift boats were also heavily involved in the SEALORDS campaign in 1968, which was Admiral Elmo Zumwalt’s successful interdiction strategy up the Mekong Delta. According to the Swift Boat Memorial website, between 3,000 and 3,500 Swift boat sailors served along the rivers and waterways of Vietnam between 1965 and 1973. Of those men, fifty died from wounds suffered in combat. Their names are now inscribed on a plaque placed near PCF 1 this week to commemorate their sacrifice during the war. 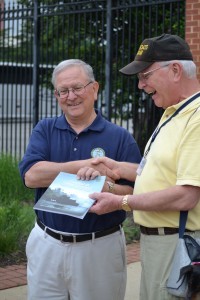 Six buses filled with veterans and the loved ones arrived late in the morning on the 9th. It was heartening to see so many family members present with their relatives, with some families representing three generations. After a quick respite to stretch their legs, the assembled mass of people walked through the fence line gate of the Navy Yard to the Anacostia Riverwalk Trail where PCF 1 has been on display since 1998. Former Senior Historian of the Naval Historical Center, Dr. Edward Marolda gave a brief introduction on the role played by Swift boat sailors during the Vietnam War, especially during the 1965 Market Time and 1968 SEALORDS operations. Marolda, himself an Army veteran of that war, has been studying that conflict for the majority of his professional career. As a member of the Naval History and Heritage Command’s (then called the Naval Historical Center) staff, Marolda actually rode on PCF 1 when she rode up the Anacostia to be transferred to the Naval Historical Center in 1995. “I have some small idea of what you all went through” Marolda mused to the veterans during his brief. He is the co-author of the Naval History and Heritage Command’s latest publication on the Vietnam War, Combat at Close Quarters: Warfare on the Rivers and Canals of Vietnam. The book is not yet available online, but once the electronic version is complete, it will be posted on their website. Marolda had a chance to provide an advance copy of the book, which included photographs and information about Swift boats operations, to Association Chairman Dave Wallace.

With that, the throng of veterans had a few moments to look around and admire the craft and tour the nearby Navy Museum before getting back on their buses. Many paused to read the information contained on the three reader rails installed this past week by NHF through the determined efforts of staff member Captain John Paulson, USN (Ret.). Some of the veterans spent their time mingling with one another, swapping stories about close calls in combat or the rigorous training they endured back in Coronado. Coastal interdiction was often a dangerous guessing game for the crewmembers serving aboard Swift boats. Several stories of courageous actions under fire were shared between NHF staff members and veterans. “It’s both comforting and haunting to see this vessel here like this,” one veteran said to NHF Digital Content Developer Matthew Eng. “I have a hard time looking at her without bringing myself back to the heavy fighting I witnessed in 1969.”

Following their brief visit to the Navy Yard, the Swift boat sailors and their families traveled to the U.S. Navy Memorial to lay a wreath in honor of those lost during the war. 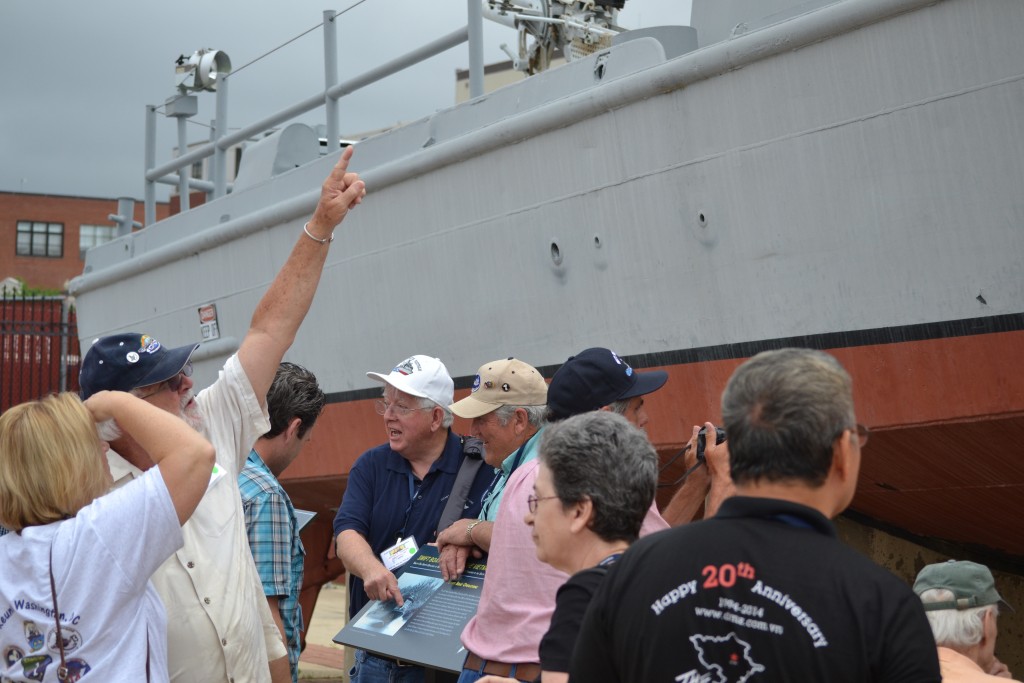 The Swift Boat Sailors Association is one of the most active and engaging veteran organizations in the country. For a group of men that comprised a small but heroic part of the Navy’s fighting force during the Vietnam War, they are utilizing the Internet and social media to spread their voice and connect with past shipmates in a way many similar organizations could only dream of. One of their allies in cultivating their story online is Suzanne Edwards, the website author of the Swift Boat Sailors Memorial. We had a chance to chat with her about her ongoing project and cooperation with the Swift Boat Sailors Association. “I wanted to work with the veterans association and create something that is both informative and interesting to the sailors who lived through it and those who can use that information in the future,” Edwards said during their brief conversation. She plans to use technology to develop and curate photos, video clips, and selected stories for the site while actively seeking user participation in the future growth of the site. Please visit The Swift Boat Sailors Memorial page if you would like to donate your personal stories or photographs from the war.